Forum List What's new Dark Style Change width
Log in Register
What's new Search
Menu
Log in
Register
Navigation
Install the app
More options
Dark Style
Close Menu
Posted on August 25, 2018 by Matt Hough
You are using an out of date browser. It may not display this or other websites correctly.
You should upgrade or use an alternative browser.
Familiar but fun-filled farce 4 Stars

Screwball comedy is alive and well in Norman Z. McLeod’s 1938 Merrily We Live, a delightful if slightly less frenzied farce with a top-notch cast of loonies all as dizzy and befuddled as is necessary for a comedy of this kind to come off.

Screwball comedy is alive and well in Norman Z. McLeod’s 1938 Merrily We Live, a delightful if slightly less frenzied farce with a top-notch cast of loonies all as dizzy and befuddled as is necessary for a comedy of this kind to come off. With a long, low bow to My Man Godfrey (which this film isn’t quite the measure of), Merrily We Live is often very funny making its own gently presented sociological points along the way. Classic Flix has done another sterling job of movie resuscitation making this fine comedy look almost the equal of Criterion’s recent release of The Awful Truth.

The wealthy Kilbourne family is tired of the vacant but well-meaning Mrs. Kilbourne (Billie Burke) hiring tramps and ex-convicts as servants who rob them blind and leave them heartsick over their betrayals. After her latest protégé steals the family’s silver, Mrs. Kilbourne agrees to never hire another drifter for his reformation, but when a grubby-looking man named Wade Rawlins (Brian Aherne) arrives at her doorstep, she cannot help but hire him as the new chauffeur. As Rawlins catches the eye of their oldest daughter Jerry (Constance Bennett), each of the Kilbournes finds that Rawlins can come in quite handy for the family even though he certainly isn’t who he appears to be.

Viewers must be willing to indulge in the monumentally silly in order to fully enjoy the contents of the screenplay by Eddie Moran and Jack Jevne. No one is really in his right mind in this household and that includes the butler Grovesnor (Alan Mowbray) who’s constantly resigning but never getting any farther out of the house than the pantry door nor the cook (Patsy Kelly) who, like the other females in the household, becomes besotted with Rawlins once he shaves the briar patch off his face. The fun comes in fits and starts here with four distinct set pieces: some nighttime antics as the drunken Mr. Kilbourne (Clarence Kolb) attempts to get to his bed without waking the house (a hilarious trip around a circular staircase is a highlight), a dinner party where Rawlins acting as a waiter is mistakenly lassoed into becoming a party guest, a spirited game of golf (which could and should have been milked for far more slapstick antics than actually occur), and a climactic kitchen turmoil where the household goes into a mayhem of fainting fits due to a spilled bottle of ammonia and some swinging kitchen doors. Veteran director Norman Z. McLeod (who is right at home with comedy having directed a couple of the Marx Brothers’ greatest films as well as W.C. Fields’ It’s a Gift and will later guide Bob Hope, Bing Crosby, and Danny Kaye in some of their best films) has a firm hand in the pacing which, admittedly, might have been a bit more lively in the early going but which gathers momentum in the home stretch.

Constance Bennett is the film’s top-billed star, but she seems a little mannered early-on before settling in to a more natural acting style later (odd since she and director McLeod worked so smoothly together in Topper). Brian Aherne scores major points as the suave, unassuming leading man and fills a tuxedo exceedingly well. Billie Burke earned an Oscar nomination (one of the film’s five nominations) as the addlepated Emily Kilbourne, and Bonita Granville is equally fine as the mischievous younger sister Marion. Clarence Kolb does excellent comedy work as the flummoxed head of the Kilbourne household. Alan Mowbray steals all of his scenes as the insulted, outraged butler Grovesnor, but Patsy Kelly is much underused as the feisty cook. Ann Dvorak is around in a few scenes as Constance Bennett’s rival for the appealing stranger’s affections, and Phillip Reed as Jerry’s would-be boy friend plays arrogant and stuffy as well as anyone.

The film’s original 1.37:1 aspect ratio has been faithfully rendered in this 1080p transfer using the AVC codec. Another of Classic Flix’s impressive restorations of a somewhat forgotten gem, the transfer features a suitable film-like look with very good sharpness and a solid grayscale featuring bright whites and rich black levels. Apart from one slight little white scratch that is gone in the blink of an eye, the image is otherwise impeccable. The movie has been divided into 22 chapters.

The DTS-HD Master Audio 2.0 mono track offers a solid if era-typical sound design (the sound recording and title song accounted for two of the film’s five Oscar nominations) with easily understood dialogue mixed professionally with the spare music score and some funny sound effects. There is some popping and clicking to be heard midway through the movie, but hiss has been eliminated, and the sound artifacts which are present do not linger.

Another delightful screwball comedy from the 1930s joins the Blu-ray fold with the Hal Roach-produced comedy Merrily We Live. While lovers of My Man Godfrey will note quite a few similarities between that film and this one, on its own it’s a fun-filled lark of a movie, and one which now looks spiffy and slick due to Classic Flix’s continuing Midas touch with their acquisitions. Recommended!

I've never seen this film but as the 1930s are my favourite decade and I love screwball comedies, I think I'm going to give it a blind buy.

Thanks for the wonderful review, Matt!

Matt, thanks for the review as I have this title on order from Classicflix.

Great review! I’m gonna have to pick this up sometime as it sounds right up my alley.

Thanks for the comparison to My Man Godfrey. That is one of my favorite films so it sounds like I will really enjoy this one! Will pick up from http://www.TwilightTimeMovies.com

I've heard about this movie all my life but I must admit I've NEVER seen it!

Adam Gregorich said:
Will pick up from http://www.TwilightTimeMovies.com
Click to expand...

It's Classic Flix, not Twilight Time.

One learns something every day! I'm glad they have a variety of outlets. Thanks for the info!

Thanks for the review Matt! Here's a trailer we cut for MERRILY:

Interesting information, and welcome to the forum, Mike!
You must log in or register to reply here.

Mr. Blandings Builds His Dream House still not out on blu ray?
2 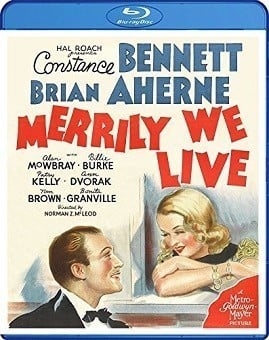