Men in Black: International was a long time coming, and although the movie that arrived is entertaining, it is derivative of previous installments and does not use the chemistry between its two leads to its advantage.

Molly (Tessa Thompson) has been trying to track down the Men in Black for twenty years, ever since she encountered an alien and the mysterious Men in Black that erased her parents’ memory of the incident. So much so that she has applied and even been accepted as an agent for both the FBI and the CIA, walking out of the interviews when they claimed that the secret agency simply did not exist. Having hacked into an astronomical tracking system, she follows a team of agents back to MiB headquarters, only to be detained by Agent O (Emma Thompson, reprising her role from Men in Black 3), who eventually recruits her and assigns her to the London office on a probationary basis to investigate a possible security breach. She is met by Agent High T (Liam Neeson), the head of the London office, mentor and former partner to Agent H (Chris Hemsworth). H is a bit of a burnout, not taking his job seriously, and when he and M are assigned to escort and guard a member of the Jababian royal family, Vungus (Kayvan Novak) and fail to keep him safe from a set of twin aliens (Laurent and Larry Bourgeois, aka Les Twins) known as Dyads, who wreck havoc on the streets of London and eventually kill Vungus, but not before Vungus hands a stone to M to keep safe, even from H. It turns out this stone is a weapon that can take down The Hive, an evil alien race that tried to wipe out Earth three years ago but were defeated by H and High T.

Men in Black: International relies too much on recreating and putting slightly different spins on the formula of the first Men in Black. Unfortunately, despite the fun chemistry Thompson and Hemsworth displayed in Thor: Ragnarok, that chemistry is not put to good use here. The overall story even resembles the first film, yet there is no real main villain of the piece, and it is rather obvious early on who the mole within the London MiB office is. Both The Hollywood Reporter and Collider reported that there were constant re-writes during production and that director F. Gary Gray and producer Walter F. Parkes often did not see eye-to-eye on the film, which most likely contributed to the lack of chemistry between the two leads and the patched together plot. The only real focus in the story is Molly’s character arc, finally achieving what she has always dreamed of – becoming a true MiB agent, and it is Tessa Thompson’s performance that sells it. Hemsworth’s H is reduced to a buffoon at times (although the actor is really showing his knack for comedy as he showed in his small supporting role in Paul Feig’s Ghostbusters reboot).

Men in Black: International was captured at 6.5k and 3.4k resolutions on ARRI Alexa 65, Mini, and SXT cameras then completed as a 2K digital intermediate with an aspect ratio of 2.0:1. Sony’s upscaled 2160p transfer has been graded using HDR10 high dynamic range. When compared to the included Blu-ray, the differences, at first, are negligible. The UHD has a slight uptick in fine detail, giving a small improvement in definition to things like beard stubble. The more noticeable difference is the much wider array and grades of colors that are visible as well as improved contrast. Many of the aliens are much more colorful on the UHD disc, and black levels are much deeper providing stronger shadow detail.

Sony’s UHD release of Men in Black: International includes a very immersive Dolby Atmos track (with a Dolby TrueHD 7.1 core) that puts the also excellent DTS-HD MA 5.1 track found on the Blu-ray to shame. LFE is more robust, adding an extra wallop to neuralyzers discharging and explosions. Sounds move more fluidly and with precision within the listening area. Dialogue is clear and understandable throughout.

Alien Shopping Network (1080p; ): Includes two sub-featurettes – Alien-Cestry.com is a spoof of the Ancestry website ads, while The Neuralyzer: Like It Never Happened is a spoof ad to get your very own neuralyzer.

Deleted Scenes (1080p; 11:35): Nine scenes are included – Do Not Turn Around!, We Need to See the Queen, Extended Night Club, How Did They Recruit You?, Ready for Riza’s, Pawny Holds Court, I’m Not Quite Feeling Myself, History Repeats Itself and An Annoying Friendship.

New Recruits, Classic Suits (1080p; 7:04): The cast and crew discuss the casting decisions in the film.

Look Right Here: Gadgets, Weapons, & Rides (1080p; 4:20): A look at, well, many of the different gadgets, weapons and vehicles designed for the film.

In Case You’ve Been Neuralyzed: MiB Recap (1080p; 3:21): Frank the Pug quickly give you the highlights from the previous three movies.

The MiB Meet the NBA (1080p; 2:36): Agents H and M investigate the possibility of a few NBA players actually being aliens.

Men in Black: International is an entertaining but rather forgettable reboot of the popular movie franchise. Video and Audio presentation are up to Sony’s usual high standards.

My wife and I saw it on the theater. It was nowhere as good as the original but about as good, maybe a little better, than the sequels

Yesterday, I finally got around to watching my 4K/Dolby Vision/Atmos digital and was very impressed by the video and audio presentations. As Dick stated, it's not as good as the first movie, but I enjoyed for light fun entertainment.
You must log in or register to reply here.
Share:
Facebook Twitter Reddit Pinterest Tumblr WhatsApp Email Link 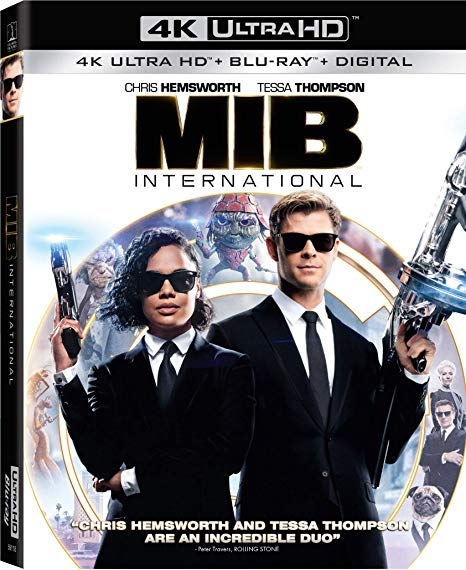