Forum List What's new Dark Style Change width
Log in Register
What's new Search
Menu
Log in
Register
Navigation
Install the app
More options
Dark Style
Close Menu
Posted on December 21, 2017 by Todd Erwin
You are using an out of date browser. It may not display this or other websites correctly.
You should upgrade or use an alternative browser.
Men in Deep Blacks 4.5 Stars

Men in Black –  4.5 out of 5
When a hostile alien, Edgar (Vincent D’Onofrio), crash lands on planet Earth in search of a miniature galaxy, Agent Kay (Tommy Lee Jones) of the secret agency known as Men in Black recruits one of the NYPD’s finest, who is given the moniker of Agent Jay (Will Smith). Jay has unknowingly had a run-in with one of Edgar’s minions, leading them to pawn broker/arms dealer Jeebs (Tony Shaloub, in a hilarious cameo) and coroner Laurel Weaver (Linda Fiorentino) who begins to get a bit suspicious about the two latest bodies that have arrived for autopsy. Seasoned veteran Kay and rookie Jay are in hot pursuit of Edgar and must retrieve the galaxy before an orbiting Arquillian battle cruiser destroys the planet to prevent Edgar from escaping.

Based on the short-series comic by Lowell Cunningham, the first film was a hit with critics and audiences alike, mixing quirky and off-beat humor with science fiction, something that director Barry Sonnenfeld had been known for with films like The Addams Family, Addams Family Values, and Get Shorty. Will Smith was a rising star with his television series Fresh Prince of Bel Air and roles in movies Six Degrees of Separation, Bad Boys, and Independence Day, and Men in Black solidified his status as a movie star. Tommy Lee Jones is perfectly cast as the straight man to Will Smith with his deadpan delivery and often stone cold face. Bringing it all together are the screenplay by Ed Solomon (Bill and Ted’s Excellent Adventure), the visual effects by Industrial Light and Magic, makeup effects and creature design by Rick Baker and his studio, and the catchy, jazzy score by Danny Elfman.

Men in Black II – 3 out of 5
After the success of the first film, Columbia Pictures announced there would be a follow up, but that would be stalled by script developments and conflicting schedules with the main actors and director. Five years later, Men in Black II finally arrived in theaters, and while it was a success at the box office, the reaction from audiences and critics was less than enthusiastic, essentially “We waited five years for this?”

With Agent Kay retired, Agent Jay is dropping partners as often as most people use Kleenex. Jay begrudgingly partners with Frank the Pug (voiced by Tim Blaney) as he investigates the return of Serleena (Lara Flynn Boyle), who is searching for “The Light of Zartha” in her attempt to destroy Earth and Zartha. All clues seem to lead to Kay, who is now working as a Postmaster in rural Massachusetts, his memories of his days at MiB erased. With the assistance of Jeebs (Tony Shaloub), Jay is able to restore most of Kay’s memories, leading them to a waitress at a pizza parlor, Laura (Rosario Dawson). Serleena takes control of MiB headquarters, kidnaps Laura, leading to a showdown atop a skyscraper in New York.

The three biggest problems with Men in Black II are the screenplay by Robert Gordon (Galaxy Quest) and Barry Fanaro (Kingpin), which basically repeats the premise and plot of the first film, the villain Serleena who is neither threatening nor funny (Lara Flynn Boyle is sorely miscast), and the fact that Tommy Lee Jones is missing from the first 30 minutes of the film. While the movie is a nice reunion of the main cast (including Rip Torn as Zed), in the end it was a major disappointment.

Men in Black 3 – 4 out of 5
Ten years later, and Columbia Pictures brings another installment of the franchise to the big screen, Men in Black 3. The production, though, faced several problems, one of which was an aging Tommy Lee Jones, who was 66 years old when the movie was released. The solution was to bring in a time travel storyline so Agent Jay could travel back to 1969 and meet a much younger Agent Kay to be played by Josh Brolin. And it is Brolin’s performance that propels this latest entry, taking Tommy Lee Jones’ mannerisms and tonal inflections and not only replicating them to a tee, but making them seem natural and original. Back in 1969, at the launch of Apollo 11, Kay intercepted a Boglodite named Boris the Animal (Jemaine Clement), who was on a killing spree and about to lead an attack on planet Earth, eventually being incarcerated in a high security prison on the Moon. In present day, Boris escapes, travels back to Earth, and time travels back to 1969 and kills Kay. This creates a ripple effect, erasing Kay from existence beyond 1969, except for Jay, who still remembers Kay and can’t understand why no one remembers him. Agent O (Emma Thompson) realizes what may have happened, and helps Kay find a time travel device so he can stop the two Borises from taking out Kay and save humanity. I really liked how the movie acknowledged the passing of Rip Torn as Zed, honoring the actor and his character in a memorial scene that would only work within the Men in Black universe. I also found Bill Hader brilliant as Agent W, who has been working undercover as Andy Warhol in 1969, begging Kay to arrange his fake death in a desperate attempt to escape the constant sitar music. As a whole, Men in Black 3 is a much better sequel than the previous entry, coming close to the original.

All three Men in Black movies were shot on 35mm film. While the first two were completed in 35mm, the most recent installment was completed as a 4K digital intermediate.

All three films look spectacular in this release, the best they’ve looked since their theatrical releases, thanks to the use of HDR10. Colors are more natural and vibrant, particularly Jay’s red jacket that he wears to his interview at MiB headquarters in the first film. Fine detail is also improved, with more defined textures. Contrast is excellent, revealing deep blacks (the MiB uniforms receive the biggest benefit) with superb shadow detail. Film grain is noticeable and organic, although grain in the third film is less apparent but does not appear scrubbed out of existence, possibly due to it being completed in the digital realm entirely.

As with virtually every Sony UHD release, all three films have been remixed in Dolby Atmos, and the result is a much more expansive and immersive aural experience. The sphere that escapes and wreaks havoc on MiB headquarters during Jay’s tour in the first film will have your head spinning trying to follow it around your viewing area, with similar experiences in the latter two. LFE is much stronger than on their Blu-ray counterparts without being overly boomy. Dialogue is clear and precise in all three films, never getting lost in the insane mix. These are demo-worthy tracks, for sure.

All of the bonus features can be found on the original Blu-ray releases included in this set. I really wish Sony would have, at the very least, included the audio commentaries from the first two films on their UHD counterparts.

Intergalactic Pursuit: The MIB Multi-Player Trivia Game: Actually, this is now only a single player game, as multi-player requires BD-Live.

Metamorphosis of Men in Black

Design in Motion: The Look of MIB II

Partners in Time: The Making of MIB 3

Keeping It Surreal: The Visual FX of MIB 3

Music Video: Back in Time

Digital Copy: An insert contains a code to redeem digital copies of all three films. I recommend redeeming on Movies Anywhere, as that will give you streaming UHD versions on iTunes, Amazon Video, and Google Play Movies and HDX (at press time) on Vudu.

The Men in Black have never looked or sounded better that they do on 4k UHD Blu-ray. Highly Recommended.

Thanks for the review Todd! I picked this up a couple of weeks ago and am looking forward to screening all three films. It's good to know they look and sound so spectacular.

Going to use my Christmas gift cards tomorrow and depending on pricing & availability I may be picking up Men In Black Trilogy on 4K UHD BD. And since I only have the first film on dvd and blu-ray it will be an easy decision to pick up the 4K trilogy since I am not repurchasing an entire trilogy. I only want the first film in 4K, but apparently the only way to get is to buy the trilogy. That sucks.
You must log in or register to reply here. 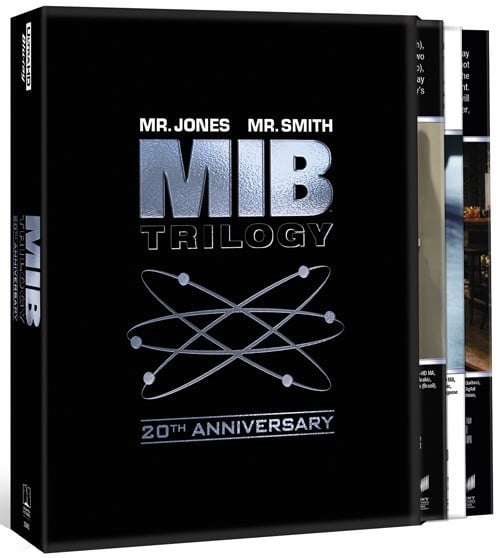