Memoirs of an Invisible Man stands out as an odd duck in the oeuvre of director John Carpenter. Despite the billing of Chevy Chase in the lead, it’s a movie that doesn’t fit comfortably in any one particular genre, making it somewhat of a disappointment considering some of the talent involved in making the movie. Nevertheless, it’s more of an intriguing misfire that does have it merits and Scream Factory’s release gives people a chance to give it a second look.

Harried San Francisco stock analyst Nick Halloway (Chevy Chase) seems to have a life most would envy. That all changes when a nuclear accident at a science laboratory renders himself invisible physically. Not surprisingly, the government – particularly the CIA – has invested their time and money in that project and have Nick in their sights. Now Nick must find a way to stay a step ahead of the government agents on his tail, especially a rogue agent (Sam Neill) with a history of “accidents”, and how to romance a documentary producer (Daryl Hannah) while trying to get his life and his molecules back.

The movie represents an anomaly in the career of John Carpenter, as he wasn’t given total creative control over the project compared to his previous efforts. However, he can’t truly be faulted for some of the shortcomings, and blame certainly can’t be assigned to the cast as well. The main problem here lies in an indecisive script by three different writers – one of them being the noted William Goldman – who had a hard time trying to blend elements of science fiction, thriller and comedy into a cohesive whole. The strongest point is the impressive visual and digital effects by Industrial Light and Magic, and the way Carpenter deploys them effectively in visual gags sprinkled throughout the movie. Coming in between Terminator 2: Judgment Day and Jurassic Park, the movie could be seen as a stepping stone in the progression of digital effects in the movies. Even with these effects though, it’s doesn’t really lift the movie too much, leaving it with a great visual sense, but not much defined substance to the style; a shame, really.

Originally meant to be a bridge from him transitioning from comedic parts to more dramatic roles, Chevy Chase acquits himself well as Nick, even providing a noir-style narration into how he became a modern day invisible man and the challenges facing him as a result. Daryl Hannah is OK as the romantic interest of Nick, but disappears for much of the first half of the movie before reappearing for the second half, further illustrating the script’s pratfalls. As the sinister CIA agent on Nick’s tail, Sam Neill lends a certain charm to the menace – not too surprising coming from the man who played a grown up Damien Thorn in The Final Conflict (1981). Other familiar faces making an appearance are Michael McKean as Nick’s friend and fellow colleague, Stephen Tobolowsky as the frustrated CIA superior looking for the invisible Nick, Jim Norton as the doctor behind the secret experiment gone horribly awry, and Ellen Albertini Dow – the rappin’ grandma from The Wedding Singer – as Nick’s downstairs neighbor who inadvertently provides Nick with a means for escape from the agents; director John Carpenter also makes an appearance (billed as Rip Haight) as a helicopter pilot.

The film’s original 2:35:1 aspect ratio is preserved in a 2K scan from the film’s original interpositive produced for this release. For the most part, William A. Fraker’s cinematography is strong, with a sturdy grain structure, fairly even color palette, organic skin tones, and fine details noticeable; also, there’s minimal instances of dirt, scratches and speckling. Some scenes and shots look softer compared to others, mostly due to the optical effects deployed for those in question. Other than that, this transfer exceeds the previous DVD release.

The movie’s original Dolby sound mix is preserved on the DTS-HD MA 2.0 track included on this release. Shirley Walker’s score has great fidelity, as does the dialogue, with nearly no issues of distortion, crackling or hissing evident on the track. The sound effects are also transferred equally well on this track as well; all in all, the sound quality makes this another winner for the Shout brand in this area.

How to Become Invisible: The Dawn of Digital F/X (4:11) – Carried over from the 2003 DVD release, Ned Gorman, Douglas Smythe and Bruce Nicholson of the film’s visual effects crew reveal – no pun intended here – the unique challenges in creating the effects for the movie and the process for creating them.

Vintage Interviews with John Carpenter, Chevy Chase, and Daryl Hannah (5:23) – Taken during shooting, the director and stars share their feelings about the movie, interspersed with behind-the-scenes footage and scenes from the finished movie.

Behind-the-Scenes Footage (5:07) – More footage revealing the making of the movie.

Outtakes (3:09) – Footage showing takes that weren’t used in the final cut of the movie.

TV Spots (4:11) – 10 spots promoting the movie on television; some sound like they may have been narrated by Mark Elliot.

Memoirs of an Invisible Man is probably more notable for outstanding special effects that its rather uneven script. That being said though, the involvement of John Carpenter and Chevy Chase does give it a little more standing for their respective fans than anyone else – I do consider myself a fan of the director. Scream Factory’s Blu-ray release is a quality affair, even though there’s not much in new special features, giving those fans a good reason to retire their DVD copies of the film and giving newcomers a chance to judge (or re-evaluate) for themselves. 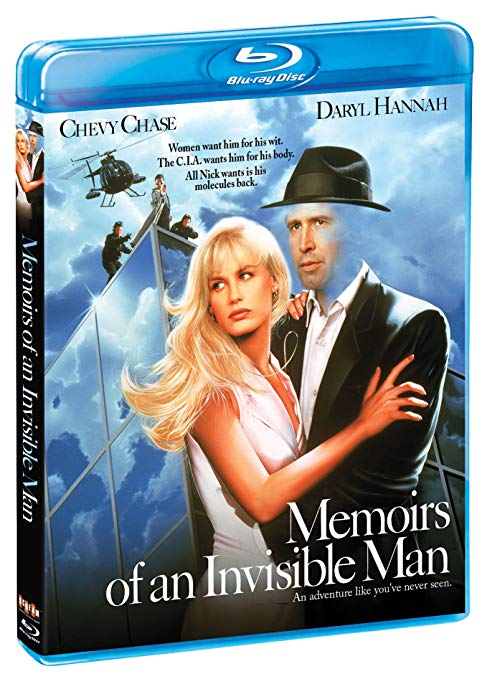