A true story of the unshakable bond between a Marine and a dog partner gives weight and substance to Gabriela Cowperthwaite’s Megan Leavey.

A true story of the unshakable bond between a Marine and a dog partner gives weight and substance to Gabriela Cowperthwaite’s Megan Leavey. With decent direction, appealing actors of both the human and canine variety, and a narrative that sets up its conflicts pretty succinctly if just a little obviously, Megan Leavey nevertheless manages to hit its emotional targets quite nicely.

With little interest in anything after finishing high school and desperate to leave behind a stultifying life at home, Megan Leavey (Kate Mara) decides to try the Marine Corps where she makes it through basic training and then gets attracted to the K-9 unit training dogs as IED sniffers in the Middle East. One dog in particular, an aggressive German shepherd named Rex, catches her eye, and when his regular trainer can get nowhere with him, Megan takes over his training where the team excels quite handily. Deployed to Iraq, the duo at first is not allowed on missions but inevitably Megan and Rex’s expertise can’t go unnoticed, and they are allowed in the field after three months. Six months into their deployment, they go on a mission where they uncover innumerable booby traps and weapons hideouts but also get pinned down in a craftily constructed trap that they barely escape while sustaining physical and emotional trauma to them both, the aftereffects of which will lead to monumental changes in them both.

The Pamela Gray-Annie Mumolo-Tim Lovestedt screenplay doesn’t spend any more time than necessary in setting up Megan’s unbearable home life, her boot camp experiences (a wily montage showing her gradual transformation into a respectful and eager Marine), and her meeting and training sessions with Rex. (The latter is so superficially covered that it seems almost too shallow, as if training Rex and bonding with him was almost an overnight occurrence.) The key sequences, of course, happen during her war tour of duty where Megan and Rex learn bit by bit to adjust to the new and dangerous surroundings, and Megan embarks on a sexual relationship with fellow Marine Matt Morales (Ramon Rodriguez). Director Gabriela Cowperthwaite handles Rex and Megan’s combat duties with some of the same gut-wrenching suspense found in a war film like The Hurt Locker. The trap the Marines walk into is well-staged and shot and is unquestionably the highlight of the movie. The latter third of the film where Megan and Rex are separated due to the thoughtless and vindictive Dr. Turbeville (Geraldine James) while Megan tries desperately everything she can think of to get him back is likewise a bit too superficially handled, and Megan loses some audience sympathy by moving back in with the mother (Edie Falco) and stepfather (Will Patton) she detests and moping around the house feeling sorry for herself (getting a civilian job working with animals would seem like a no brainer, something that, in fact, is validated by end-of-movie coda titles informing us of Megan and Rex’s ultimate ends). The feel good reunion moments are guaranteed tear-inducers, and the film ends up working sometimes in spite of itself.

Kate Mara may be tiny in stature, but she carries the film quite easily on her shoulders nicely conveying the maturation of Megan from aimless teen to a sober and serious Marine once she finds a goal for herself. Common does a fine job as Gunnery Sergeant Martin, a tough love Marine who doesn’t give Megan an inch but also provides common sense advice when she needs it. Tom Felton as dog trainer Andrew Dean has a couple of very good scenes that make us wish he were a more important part of the movie. Ramon Rodriguez is an attractive love interest, but it’s clear that Megan’s heart really belongs only to Rex. Edie Falco and Will Patton play the clueless mother and stepdad with just the right amount of irritating sass, and Bradley Whitford exists on the periphery as Megan’s father Bob who seems bereft of words except in one sequence when she needs to hear what he has to say. Geraldine James excels as the abrasive and arrogant Dr. Turbeville.

The film’s 2.40:1 theatrical aspect ratio is faithfully rendered in 1080p using the AVC codec. It’s a sharp and clear transfer with contrast consistently applied throughout and details in facial features, clothes, and hair easily observable. Color is nicely saturated and always under control with believable and appealing skin tones. Black levels are superb. The movie has been divided into 20 chapters.

The DTS-HD Master Audio 5.1 sound mix is outstanding for a mid-budget film like this. Dialogue has been well recorded and has been placed in the center channel. The bombs and weapons’ fire pop crisply and have more than adequate heft though we’re never quite put in the middle of the action as with more reference quality sound mixes. Mark Isham’s music gets the full surround treatment.

Never Give Up (2:35, HD): in this very brief promo featurette, director Gabriela Cowperthwaite, the real Megan Leavey, Kate Mara, Common, Edie Falco, Bradley Whitford, and Ramon Rodriguez give background on the true story and offer soundbites about their characters.

Megan Leavey offers a true, warm-hearted story of the inseparable bond between solider and dog with some war scenes to please action fans and character development to reel in dog lovers. The Universal Blu-ray release also makes the most of its outstanding picture quality and better than average sound design. 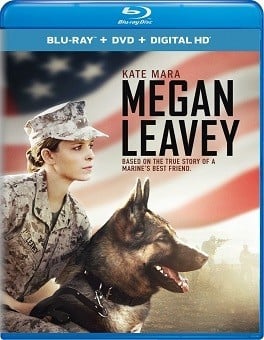