Forum List What's new Dark Style Change width
Log in Register
What's new Search
Menu
Log in
Register
Navigation
Install the app
More options
Dark Style
Close Menu
Posted on May 2, 2018 by Todd Erwin
You are using an out of date browser. It may not display this or other websites correctly.
You should upgrade or use an alternative browser.
Joe Dante's most personal film 4 Stars

Joe Dante’s nostalgic look back at going to the movies and monster films of the 1960s finally gets some respect on Blu-ray with Shout Select’s Collector’s Edition release of Matinee.

In the Fall of 1962, at the height of the Cuban Missile Crisis, film producer Lawrence Woolsey (John Goodman) makes the bold decision to sneak preview his new atomic mutation monster movie MANT in Key West, Florida, where the citizens are on high alert. Teenager and military brat Gene Loomis (Simon Fenton), who’s father was just deployed, is also a horror movie fan and quickly figures out Woolsey’s cheap attempts to play off the Cold War hysteria when he recognizes one of the two protesters handing out propaganda against the film as B-movie character actor Herb Denning (Dick Miller). The two strike up a friendship, and Woolsey allows Gene to hang around the theater and help him set up his Atomo-Vision gimmicks such as buzzers under the seats and fog machines behind the screen, much to chagrin of theater manager Howard (Robert Picardo). Gene also has taken a liking to Sandra (Lisa Jakub), the outspoken daughter of a hippie couple, and invites her to attend the preview with his little brother Dennis (Jesse Lee Soffer). Things go terribly wrong when Harvey (James Villemaire) returns to town after being released from jail and joins Woolsey’s crew. Harvey’s main reason to return to town, though, was to rekindle his relationship with Sherry (Kellie Martin), who is at the preview with Stan (Omri Katz).

Matinee is quite possibly the most personal film from director Joe Dante, who grew up in New Jersey during the 1960s watching monster and science fiction movies nearly every Saturday afternoon at the local movie theater. Movie going was a much more social event back then, and each movie was often an event all in to itself with the type of marketing even small films like MANT would receive in the theater’s lobby. John Goodman was perfectly cast as producer Lawrence Woolsey, a definite homage to Samuel Arkoff (who ran American International Pictures) and William Castle (famous for imploring gimmicks into his movies, such as the Ghost Viewer for 13 Ghosts and seat buzzers for The Tingler). Actually, there isn’t a bad performance in this film. Cathy Moriarty  plays Woolsey’s girlfriend and leading lady, Ruth Corday, who is almost fed up with Woolsey’s lack of funds and cheap gimmicks, but still obviously loves the guy. Simon Fenton, a British actor, delivers his lines with a very believable American accent. Joe Dante regulars Robert Picardo, Dick Miller, and John Sayles are hilarious, as always. The film captures the early 1960s extremely well, with its depiction of duck and cover drills, the overall production design (nearly all of Gene’s movie memorabilia and propaganda come from Dante’s personal collection), even the look and feel of the movie within the movie, MANT.

Matinee is also one of Joe Dante’s most overlooked films, a real treasure of a movie that the studio, Universal, wound up making after lending the production money that eventually never arrived from the original financiers, and then didn’t know how to really market it, eventually dumping it in theaters in late January 1993.

Universal, with the possible exception of the laserdisc release in 1993, has never given Matinee much love. It had been licensed to Image Entertainment (along with other box office disappointments like Mystery Science Theater 3000: The Movie and Radioland Murders) during the very early days of DVD as a barebones, letterboxed movie-only disc. Universal re-issued it in 2010 on DVD, again as a barebones disc, but at least with anamorphic widescreen. Fans, including myself, have been reminding Shout Factory every time they’ve released a Joe Dante movie to consider Matinee, and apparently they finally listened to the masses, as this is the first time Matinee has been available on Blu-ray here in the US.

Shout Factory’s transfer is a solid one, although it does have some barely noticeable flaws. Fine detail is overly soft, not from DNR, but more likely from either the source material or the dated transfer, or a combination of the two (this seems to be from the same broadcast master I saw on HD Net Movies several years ago). There is also a remnant of what was a scratch that was attempted to have been removed in one shot where Woolsey is talking to a crowd formed around the two protestors. Otherwise, this is a fairly blemish-free transfer, with stable colors and very good black levels, and a healthy but unobtrusive amount of visible grain.

As with most Shout Factory titles, the viewer can select either a 5.1 or 2.0 track, both in DTS-HD Master Audio. This could very well be the first time Matinee has been released on home video here in the US with its original 5.1 mix. This is a fairly good mix, front heavy for the most part, but surrounds are used to enhance the ambience of how movies would sound if you were actually inside the theater and watching it with the characters on screen. LFE also kicks in quite nicely to re-create the Atomo-Vision process used on MANT as well as the collapsing of the theatre balcony

Finally, Matinee receives some really interesting extras! I only wish Joe Dante had recorded a commentary track for this film. Sadly missing here is the actual trailer for MANT.

Master of the Matinee: An Interview with Joe Dante (1080p; 20:29): Dante discusses the making of the film, including the development process, which helps to explain why Universal may have treated the film so poorly.

The Leading Lady: An Interview with Cathy Moriarty (1080p; 12:02): Very fun interview, in which the actress talks about working on the film and what a joy it was to work with John Goodman and the kids.

MANTastic: The Making of a Mant (1080p; 12:02): Members of the effects team discuss making the movie within the movie.

Out of the Bunker: An Interview with Actress Lisa Jakub (1080p; 16:17): The actress left acting shortly after making Matinee, but has pleasant memories and was a huge fan of Joe Dante’s work prior to making the movie.

Lights! Camera! Reunion! An Interview with Director of Photography John Hora (1080p; 21:13): Hora discusses the problems with shooting the film in Florida, particularly at Universal Studios Orlando, in the early 1990s.

Paranoia in Ant Vision: Joe Dante Discusses the Making of the Film (1080p; 32:37): Covers much of the same material as Master of the Matinee, this interview was taken from the French Blu-ray release from Carlotta.

MANT! – The Full Length Version of the Film with Introduction by Joe Dante (1080p;  22:45): Dante discusses the making of the movie within the movie prior to the presentation of the complete MANT film.

Behind the Scenes Footage Courtesy of Joe Dante (480i; 8:22): Joe Dante’s home movies from the set.

Deleted and Extended Scenes Sourced from Joe Dante’s Workprint (upscaled 1080i; 2:21): A total of five scenes from the workprint.

Reversible Cover: Owners of this Collector’s Edition can choose between newly commissioned artwork or the original movie poster artwork. 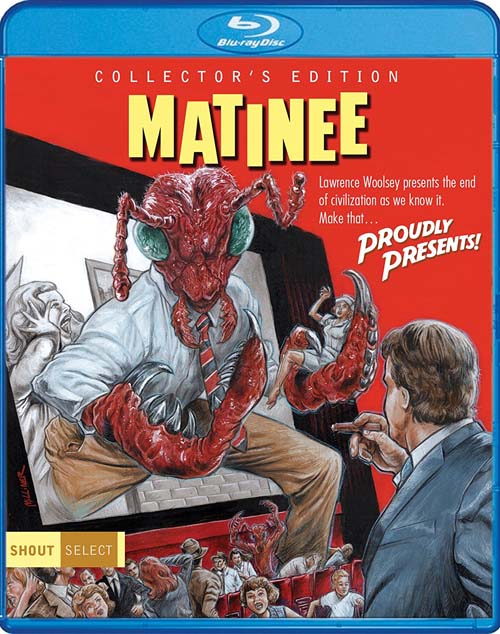