Forum List What's new Dark Style Change width
Log in Register
What's new Search
Menu
Log in
Register
Navigation
Install the app
More options
Dark Style
Close Menu
Posted on January 27, 2017 by Matt Hough
You are using an out of date browser. It may not display this or other websites correctly.
You should upgrade or use an alternative browser.
Broad, silly comedy based on true events is probably worth a rental. 3 Stars

Numbskull comedy can be hard to pull off, and Jared Hess’ Masterminds works in only fits and starts, but what’s funny is very funny, and what’s dumb is, well, awful.

Numbskull comedy can be hard to pull off, and Jared Hess’ Masterminds works in only fits and starts, but what’s funny is very funny, and what’s dumb is, well, awful. Based on a true story of one of the largest heists in American history, Masterminds stretches the truth to make its characters comic caricatures and a love story is built into the scenario that didn’t actually happen in real life, but it’s amazing how much of this absurdist farce hews actually close to the mark: it’s a clown college tutorial on robbery and what not to do afterward.

David Ghantt (Zach Galifianakis) is a mild-mannered armored car driver for Loomis Fargo who while engaged to the indifferent Jandice Jeffcoat (Kate McKinnon) is actually carrying a torch for his riding partner Kelly Campbell (Kristen Wiig). When Kelly falls in with a crew of crooks led by Steve Chambers (Owen Wilson), they map out a scheme to steal $17 million from Loomis Fargo and use David as their inside guy and inevitable dupe. The robbery goes off with some farcical complications, but David is sent off to Mexico with a few thousand dollars and promises that Kelly will soon join him with their share of the millions. Meanwhile, two FBI agents (Leslie Jones, Jon Daly) are hot on the trail of the crooks, not difficult since David overlooked a security tape on his way out and the Chambers clan begins spending money like water. Chambers finally realizes he needs to send a hit man Mike McKinney (Jason Sudeikis) to take care of David since he believes there is no real evidence against himself, but the hit doesn’t go quite as planned, and David finally realizes he’s been made the fall guy for the robbery.

Chris Bowman, Hubbel Palmer, and Emily Spivey have taken the basic facts of the story and constructed a redneck slapstick comedy that pushes logical boundaries but is just outrageous enough to hold our interest. No one in the film including the FBI agents assigned to the case is working with a full load of mental bricks, and there are plot holes that the film skirts to keep the story going (Ghantt, recognized on posters in Mexico at the airport and pursued by three security police, eludes them but has no further trouble; the “disguises” Ghantt uses to hide behind in real life would really draw more attention to himself: a cherry red cowboy suit with enormous dangling fringe?). Director Jared Hess is not one for understatement, and that certainly includes this movie which piles on the slapstick at every possible moment including Ghantt tucking his gun into his back and firing through his butt crack, locking himself in the back of the armored truck and having to devise a means of operating the driver controls, and the usual quota of fart and poop jokes. The most entertaining sequences are fabricated for the film: a kind of parody of The Parent Trap which Zach Galifianakis and Jason Sudeikis milk for all it is worth making their scenes together truly treasurable. The film plays out with its gag reel before the closing credits.

Since the story is North Carolina based, each one of the principal cohorts in the heist speaks in those broad Southern movie accents that don’t really ring true to residents of the area. Zach Galifianakis’ brogue is the broadest, but at least it remains consistently present. Both Kristen Wiig and Owen Wilson play at an accent but slip constantly out of it during numerous moments during the movie. All of them are playing simple-minded types who can’t see or imagine three moves ahead of the game they’re all playing, so their stupidity can at times be funny but at other times can be more than trying (the real crooks these latter two are playing were far more sinister than their screen counterparts). Kate McKinnon’s Jandice, not actually a part of the crime story but rather the jilted girl friend, is kind of off in her own world and somewhat apart from the events that are transpiring even though she’s, of course, funny and inimitably weird. Jason Sudeikis is just psychotically offbeat enough to be amusing and endearing, a hit man with heart. Leslie Jones as the most vocal of the FBI agents and Ken Marino as a snooty neighbor suspicious of the rich rednecks score in small bits during the film.

The film has been framed here at 1.78:1 and is offered in 1080p resolution using the AVC codec. Picture quality is superb throughout with bright, rich color and tons of detail in facial features, clothes, and hair. Contrast has been consistently applied to make for a reference quality video transfer. The movie has been divided into 24 chapters.

The DTS-HD Master Audio 5.1 sound mix seems stronger in the front channel placement rather than in its rear channels, typical for a comedy. The rich selection of pop standards along with Geoff Zanelli’s background score do get spread through the entire soundstage. Dialogue has been recorded well and is found in the center channel. A few conspicuous sound effects (the explosion of a propane tank at a party, some random gunshots) get appropriate placement and have some heft.

The Imperfect Crime (16:30, HD): the true story of the Loomis Fargo robbery is told by the real David Ghantt, FBI agents Mark Rozzi and John Wydra, and others.

Promo Trailers (HD): Why Him?, Keeping Up With the Joneses, Mike and Dave Need Wedding Dates, Absolutely Fabulous: The Movie.

A stumblebum redneck heist comedy made more surprising since it’s based on an actual event, Masterminds works as a silly farce though one must be in the mood for such a broad spectacle. A first-rate video and audio transfer certainly helps with making this a reasonable rental choice for those wishing to simply turn off their brains and watch the silliness unfold.

I missed the "very funny" parts and only saw the "awful" stuff!

Hey remember when Jared Hess was going to be the future of comedy?

...and then the audience for Napoleon Dynamite graduated from Middle School? =P
You must log in or register to reply here. 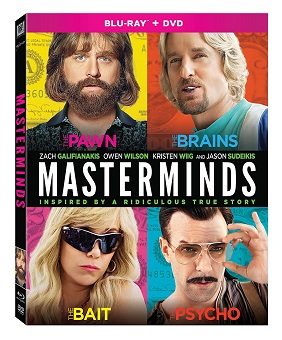