Great cast in historical drama may inspire you to read up on history. 3.5 Stars

Saoirse Ronan(Atonement) and Margot Robbie(I,Tonya) play the eponymous queen and her rival, Elizabeth I, in Mary Queen of Scots which is available on digital platforms on February 19, 2019, and on 4K UHD, Blu-ray, and DVD on February 26, 2019.

Mary Stuart(Saoirse Ronan) was raised away from Scotland, in France, and ultimately married King Francis II.  Following the king’s death, Mary returned to Scotland and made claim, either deliberately or otherwise, to the English throne as the legitimate heir to King James V.  This claim put her into direct conflict with her cousin, Queen Elizabeth I of England(Margot Robbie).  Those who do not abhor spoilers can read the history books to learn how this ends for Mary and Elizabeth.

The cast includes Guy Pearce(William Cecil), Jack Lowden(Lord Darnley), and David Tennant as John Knox.  Margot Robbie is virtually unrecognizable beneath the smallpox scars, powder makeup, and wigs of Elizabeth I.  The screenplay by Beau Willimon(House of Cards) is based on My Heart Is My Own: The Life of Mary Queen of Scots by John Guy, and directed by seasoned theatrical director Josie Rourke.  Political rivals Mary and Elizabeth are ultimately, in their own way, pawns and victims pitted against each other by forces beyond their control.
Those who appreciate the medieval political machinations of Game of Thrones may find some matters of interest here.  The screen story demands the viewer to have some previous historical knowledge for understanding;  neophytes ignorant of John Knox and the Scottish reformation may feel lost regarding the conflicts between Catholics and Protestants, not unlike the politics of Game of Thrones.  The story of these royal cousins is fascinating, which may explain why this story has been told repeatedly on the screen, and if the film inspires some viewers to read up on history as a result, that is probably not a bad thing, since history can teach us much about our world of the present, as much as the past.

Mary, Queen of Scots appears on 4K UHD in its original 2.39:1 screen aspect ratio.  The transfer displays an enviable chromatic range in 4K, even if the film does not seem overtly colorful.  Fine detail is exquisite, and visual clarity is almost too high, if that makes sense.  The mesh of Robbie’s facial makeup can be discerned in a couple of scenes far beyond the intent of the filmmakers;  this is no criticism of the makeup, which is excellent, but a manifestation of the clarity of image in 4K.

Mary, Queen of Scots has an English Dolby Atmos soundtrack by default.  The sound mix employs some nice use of directional audio in outdoor scenes that help to immerse the viewer in the world of the film.  The low range audio makes fine use of the subwoofer while mid to high range sound is presented very well in service to the score composed by Max Richter(Shutter Island).

An Epic Confrontation(3:58):  Director Josie Rourke joins stars Saiorse Ronan and Margot Robbie in discussing the scene in which Mary meets Elizabeth.
Tudor Feminism(3:35):  Ronan, Robbie, and others discuss the links between the 2 queens and the forces that drove them apart.
Something About Marys[get it?](2:24):  Principals playing Mary’s maids in waiting talk briefly about performing in the film.
Feature length commentary:  Director Josie Rourke and film composer Max Richter discuss the film.
Also included are a blu-ray disc of the film and a paper insert with validation code for the Movies Anywhere digital app.

Mary, Queen of Scots is an interesting character study of two cousins who are driven apart by forces beyond their control.  A knowledge of medieval English history is not essential but still recommended to understand the nuances behind the political decisions in the film.  Video and audio in 2160p and Dolby Atmos are first rate, while special features are fairly minimal.  Even if one is ignorant of medieval history, there is enough in Mary, Queen of Scots to pique one’s interest, whether it be the fine performances by the cast, the music score, or the conflict between the historical principals.

Time for a Blu release of this story from Universal (1971) with Vanessa Redgrave and Glenda Jackson. Deliriously beautiful John Barry score. No better time to get this out!
Reactions: Peter Keller and PMF
You must log in or register to reply here.
Share:
Facebook Twitter Reddit Pinterest Tumblr WhatsApp Email Link 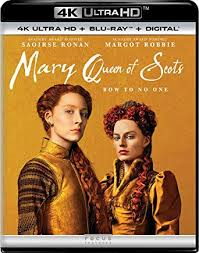