Forum List What's new Dark Style Change width
Log in Register
What's new Search
Menu
Log in
Register
Navigation
Install the app
More options
Dark Style
Close Menu
Posted on April 3, 2019 by Todd Erwin
You are using an out of date browser. It may not display this or other websites correctly.
You should upgrade or use an alternative browser.
Magic that grows on you 4 Stars

Mary Poppins Returns is a film that improves with repeat viewings, and Disney’s 4K UHD Blu-ray edition is a modest upgrade over its Blu-ray counterpart.

Arriving 54 years after its predecessor, Mary Poppins Returns doesn’t quite capture the magic of 1964’s Mary Poppins (what movie could?), but is still a worthy sequel with a magic all its own. Twenty-five years after the events in the first film, the Banks children are grown up. Michael Banks (Ben Whishaw) is widowed with his three children, Annabel (Pixie Davies), John (Nathanael Saleh), and Georgie (Joel Dawson), taking up residence in the old Banks home at 17 Cherry Tree Lane with housekeeper Ellen (Julie Waters). His sister, Jane (Emily Mortimer), is an activist, helping out at soup kitchens and petitioning when not helping Michael with the children. The family has fallen on hard times since Michael’s wife died, forcing him to take out a second mortgage on the house while working part time at the Bank his father used to work at. This is Depression-era London, and Michael has fallen behind in paying off the loan, allowing bank president Wilkins (Colin Firth) to begin foreclosing on the house. The children have become the adults in the household, calling for the plumber and taking care of grocery shopping, essentially in danger of losing their childhood. One windy day, Mary Poppins (Emily Blunt) floats down from the clouds holding her umbrella, meeting the children in the park and greeted by city lamplighter Jack (Lin-Manuel Miranda). Jack remembers Mary when he worked as a chimney sweeper as a child. Mary, Jack, and the children go on many musical adventures as Mary helps the children regain their sense of imagination while Michael and Jane search frantically for the certificate of shares their father owned in the bank in order to repay the loan and keep the house.

I originally saw Mary Poppins Returns during its theatrical run in Dolby Cinema at the AMC Mesa as a family holiday outing with my wife, my sister, and my three nieces. My initial reaction was rather mediocre and felt the movie was a bit too long, although I thought the performances were very good and the choreography by director Rob Marshall and Joey Pizzi excellent (my nieces loved the film). Three months later was my second viewing, this time at home, and enjoyed it much more this time around. The songs by Marc Shaiman and Scott Wittman began to grow on me, and the 130 minute running time seemed to breeze by. Emily Blunt is practically perfect as Mary Poppins, making the character her own while also paying homage to Julie Andrews’ performance from the first film. Lin-Manuel Miranda is very enthusiastic as Jack, who thankfully was not a love interest for Mary Poppins (he eventually fancies Jane). Colin Firth is obviously having fun as the movies villain, bank president Wilkins. The movie also includes some fun cameos by Dick Van Dyke, Meryl Streep, and Angela Lansbury.

Mary Poppins Returns was captured at 3.4K resolution using Arri Alexa Mini and SXT cameras, and I suspect was completed as a 2K digital intermediate with Dolby Vision high dynamic range for premium engagements. The 2160p HEVC-encoded transfer, which replicates the film’s 2.39:1 theatrical aspect ratio, is a noticeable but often subtle upgrade to the included Blu-ray edition. Most of these improvements, though, are not from the increase in resolution, but from the wider color gamut, shadings, and contrast obtained through its use of HDR10. While the image may appear slightly darker, the blue stripes in Mary Poppins’ overcoat, for example, are much more evident on the UHD edition than they are on the Blu-ray, as are the intricate designs on the wallpaper in the Banks home. Blacks are incredibly deep while retaining excellent shadow detail.

The Dolby Atmos track on the UHD disc is also a subtle improvement over the DTS-HD MA 7.1 track found on the Blu-ray. Overall, this is still a fairly front-heavy mix (as it was in its theatrical run), but the Atmos track plays a bit wider, with sounds and even musical instruments placed more distinctly within the viewing area. LFE presence is adequate, with a few good sonic booms when Admiral Boom ignites his canon, but that is due more to the original theatrical mix than the usual dumbing down that Disney has been known to do for home video. Dialogue is well-prioritized, always clear and understandable.

All of the extras can be found on the included Blu-ray edition and at select digital retailers when redeeming the included digital copy.

Sing Along Mode: Watch the film with karaoke-style lyrics on screen.

Back to Cherry Tree Lane: Dick Van Dyke Returns (1080p; 5:22): The cast and crew discuss working with the 91-year old actor, who also is taken on a tour of the Cherry Tree Lane set.

Seeing Things from a Different Point of View: The Musical Numbers of “Mary Poppins Returns” (1080p): A behind the scenes look at the following musical numbers featured in the film – Trip a Little Light Fantastic (3:56), The Royal Doulton Music Hall /A Cover Is Not the Book (7:05), Turning Turtle (3:01), and Can You Imagine That? (4:03).

Deleted Song – The Anthropomorphic Zoo (1080p; 5:04): A demo version of a song that was eventually replaced with The Royal Doulton Music Hall.

The Practically Perfect Making of “Mary Poppins Returns” (1080p; 23:38): A four-part look at the making of the film and the legacy of the original.

Mary Poppins Returns is a movie that has grown on me, with increasing appreciation with each subsequent viewing. The 4K UHD Blu-ray presentation is a subtle bump in audio and video over the Blu-ray.

Thanks for this review. I agree with this from the review....

"....The songs by Marc Shaiman and Scott Wittman began to grow on me, and the 130 minute running time seemed to breeze by. Emily Blunt is practically perfect as Mary Poppins, making the character her own while also paying homage to Julie Andrews’ performance from the first film. Lin-Manuel Miranda is very enthusiastic as Jack, who thankfully was not a love interest for Mary Poppins (he eventually fancies Jane). Colin Firth is obviously having fun as the movies villain, bank president Wilkins. The movie also includes some fun cameos by Dick Van Dyke, Meryl Streep, and Angela Lansbury."

I thought this was a perfectly sweet little movie.

Lovely film. Great 4K. Thanks for your review.

I have now watched it three times, and I find the score more tuneful and catchy with each listen. Bravo!

I saw this with a friend in the theater and we both loved and adored it. I thought it was absolutely delightful and a worthy successor to the original film. I consider it an instant classic and hope that more people will soon regard it as such. The creative team and cast should be extremely proud of their accomplishments. I really enjoyed the music upon first hearing and left the theater with many songs replaying in my head. I’ve now watched the blu-ray 3 times and enjoy the music more each time. Having lost my own dear mother a few months prior to the film‘s release, I was especially moved by the songs “A Conversation” and “The Place Where Lost Things Go” (with the latter song turning me into a sobbing mess).
Last edited: Apr 4, 2019

I saw the movie just a few days before Christmas, and I agree it doesn't quite capture the magic of the 64 film, nonetheless I was enchanted. How long has it been since there was warm-hearted live action musical at holiday time? I also loved the vivid color, as compared to the washed out look that seems to be popular now. It really does have a certain joy, especially in the dancing and other exuberant musical sequences.

I also loved that almost all of the sequences were based on chapters out of the various books, like the China bowl.

My only problem with it is the Colin Firth character. Neither the books nor the 1964 film had a "villain"; they had people who "couldn't see past the end of their nose" who ultimately saw the light due to Mary Poppins' mysterious ways. Surely Mary Poppins had the power to do the same for Colin Firth.

Oh, and I REALLY wanted the bicycle to fly.

That being said, I have watched the Blu-ray 3 times and enjoyed it very much.

I really went into the film wanting to like it. I certainly have no complaints about the cast, the production design, or the music. I just really felt like the script was written almost like a Mad-Lib, where the framework of the original film was left more-or-less intact and they simply filled in the blanks. The children were so underwritten that they may as well have not been in the film. I also agree with Kevin that the unnecessary inclusion of a villain harmed the film. The whole plot device was simply there to provide an excuse for a third-act action scene. I didn't hate the film. There was too much obvious love and attention put into it for it to be entirely dismissed. I just felt that it was a good film that was prevented from ever being a great film by corporate insistence on formula over character and imagination.

Emily Blunt is the reason to see this movie. She is a worthy successor to Julie Andrews. The movie is a worthy attempt to re-catch lightning in a bottle that was the original perfect storm.

The legend goes that Walt Disney became depressed after Mary Poppins was released. The reason? Because he realized he could never top it.

The only thing disappointing about this film to me was the lack of the 3D conversion that was promised when the film went into production. Disney conversions have been really well done lately and would have added much more to the magic than 4K does. I was really looking forward to it but it was a no go. So sorry to see 3D being dropped by the studios and exhibitors.

Saw the movie a few days ago and liked it. It's nice to see a film with no guns or superheroes for a change.

atcolomb said:
Saw the movie a few days ago and liked it. It's nice to see a film with no guns or superheroes for a change.
Click to expand...

That, I wholeheartedly agree with. As someone who has never stopped reading comics, even I'm tired of Superhero films.
W

Brian Kidd said:
That, I wholeheartedly agree with. As someone who has never stopped reading comics, even I'm tired of Superhero films.
Click to expand...

Like Mary poppins herself, I found the film "Practically perfect in every way."
You must log in or register to reply here. 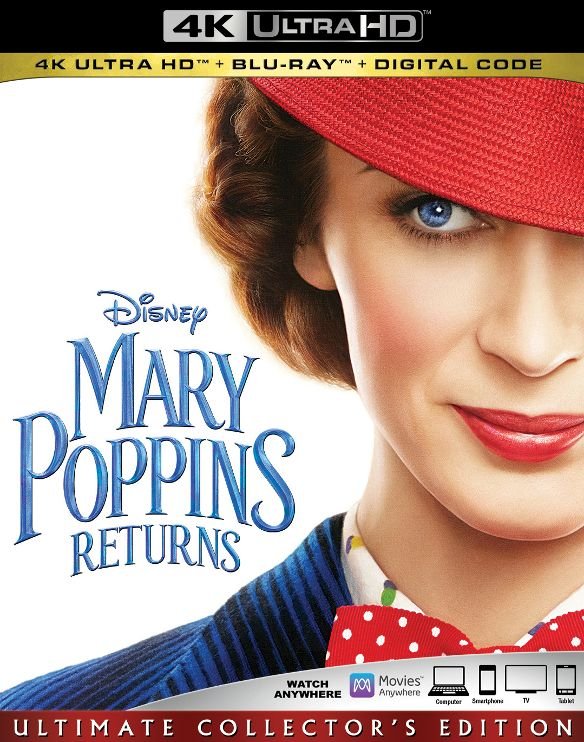