Posted on May 27, 2016 by Todd Erwin
Much more than Hannibal Lecktor's first appearance on film. 4 Stars

Michael Mann’s cult thriller Manhunter not only introduced audiences to Hannibal Lecktor (as spelled in this film), but also to the use of FBI forensics and the use of profiling to help identify a suspect. Although initially a box office disappointment, thanks mostly to a bad marketing campaign by the film’s ill-fated studio, Manhunter has garnered much respect and a rather loyal following through cable broadcasts and home video.

Two seemingly unconnected mass murders have occurred across state lines, the only things in common are that they were committed during a full moon and the suspect left very distinct bite marks on his victims, thus dubbing him the Tooth Fairy. Jack Crawford (Dennis Farina) is heading the FBI’s investigation team, and desperately asks his old friend and fellow FBI investigator Will Graham (William Petersen) to come out of retirement and consult on the case. Graham is best known for catching serial killer Hannibal Lecktor (Brian Cox) by getting into the killer’s mind, leaving Graham with some deep psychological scars that ultimately forced him to leave the bureau in the first place. But Graham convinces his wife, Molly (Kim Greist), that he’ll only be looking at evidence and offering advice, and won’t be heavily involved in the investigation. That facade ends rather quickly, when after meeting with Atlanta Police and finding the Tooth Fairy’s fingerprints on the victims’ eyeballs, Graham and Crawford run into tabloid journalist Freddy Lounds (Stephen Lang), who stalks Graham and photographs him outside the building where Lecktor is incarcerated, posting the photo on the front page of The Tattler. Graham is using Lecktor to get his old mindset back to find the Tooth Fairy before the next full moon, but Lecktor has a few tricks up his sleeve, as well, secretly playing pen palls with the Tooth Fairy in the personals section of The Tattler, and ultimately placing Graham’s family in danger. Graham and Crawford use Lounds to hopefully lure the Tooth Fairy into a trap by agreeing to be interviewed in The Tattler, a tactic that backfires tragically when Lounds is kidnapped and the audience finally gets to meet the Tooth Fairy, aka Francis Dollarhyde (Tom Noonan). At his job at a film processing plant in St. Louis, Dollarhyde meets Reba McClane (Joan Allen), a young, attractive blind woman that he invites to a veterinary office at the zoo to experience a tiger up close and personal as he’s prepped for oral surgery (a truly mesmerizing, hypnotic, and beautifully photographed scene), and then invites home for dinner. Reba finds him very interesting, and possibly tames the monster inside a the full moon approaches. It all leads to a showdown between Graham and Dollarhyde at Dollarhyde’s secluded suburban home.

Manhunter was adapted from the novel Red Dragon by Thomas Harris, and if any of this sounds vaguely familiar, producer Dino De Laurentiis made the film a second time in 2002, this time using the original title and casting Anthony Hopkins in the role that earned him an Oscar for Silence of the Lambs, with Brett Ratner in the director’s chair (and an all-star cast that included Edward Norton and Ralph Fiennes). Mann’s film is the superior version, with Petersen laying the groundwork for his role as Gil Grissom on CSI, and writer-director Mann placing the main emphasis on Graham and his obsession to stop the monster in his tracks before he kills another innocent family. The film has many of 1980s Mann trademarks, particularly its stylized Miami Vice look and synth-heavy sound (Mann was executive producer of the series). As good as an actor as Ralph Fienes is, Noonan’s performance as Dollarhyde is unforgettablly creepy and horrifying.

Manhunter has had a very strange and rocky voyage on home video. It was first released in a horribly framed full-screen transfer on both VHS and Laserdisc by Lorimar Home Video. Mann shot Manhunter in Super35, and in those early full-screen transfers, boom mics are clearly visible in several shots and the framing is sometimes just odd. This was rectified when Warner Home Video, which acquired Lorimar, began re-issuing that back catalog on laserdisc in widescreen, correcting the odd framing and cropping out those pesky boom mics. Mann had also tinkered with the movie several times, creating a “director’s cut” for The Movie Channel, and even NBC aired the movie, re-titling it Red Dragon: The Curse of Hannibal Lecter to cash in on the box office success of Silence of the Lambs.  When DVD arrived, the rights had reverted to StudioCanal, who had licensed their catalog to Anchor Bay, who released the film in two or three different cuts: a so-called theatrical cut (which differed from the Lorimar and Warner releases), a “director’s cut,” and an “ultimate director’s cut.” MGM then released a barebones Blu-ray in 2011.

This all leads to this new Collector’s Edition from Shout! Factory imprint Scream Factory. The 1080p transfer used for the Theatrical Cut appears that it may very well be the same one used on MGM’s barebones release, albeit with a few tweaks in regards to color timing and image cleanup. Colors are consistent and natural, with realistic flesh tones throughout most of the feature, and never appearing oversaturated. Film grain is apparent, and fluctuates throughout dependent on the lighting of each scene, with darker scenes containing more visible grain, although it is never overly distracting. Contrast is quite good, with deep blacks that provide some nice shadow detail. Fine detail is also very good, particularly in facial textures (in Farina’s face, especially). The print does sport some very minor specks of dirt hare and there, but nothing to be overly excited about. There is also some banding issues in the opening sequence that is supposed to be Super 8mm footage shot by the Tooth Fairy as he walks up the stairs to kill the latest family and then transferred to videotape, and is likely intentional. As for the Director’s Cut, see my notes in the Special Features section below.

Shout! Factory has included both 5.1 surround and 2.0 stereo mixes in DTS-HD Master Audio for both the Theatrical and HD version of the Director’s Cut. The 5.1 mix has a deeper low end, thanks to a dedicated LFE track, and some discrete surround effects used rather sparingly. Dialogue is clear and understandable, but does sometimes get drowned out by the score. The 2.0 stereo track is more representative of the film’s original Dolby Stereo soundtrack, lending a more balanced mix between dialogue and music, but never quite having that low end oomph found on the 5.1 mix. The Standard Def version of the Director’s Cut has a 2.0 Dolby Digital soundtrack, encoded at 192 kbps.

Disc One, also labeled as the Theatrical Cut, has all of the newly created bonus material for this release.

The Mind of Madness: Interview with actor William Petersen (1080p; 18:16): Petersen discusses his early experiences with Michael Mann on Thief (he played a bartender), getting cast in the film, his preparation for the role, and working on a Dino De Laurentis production.

Courting a Killer: Interview with actress Joan Allen (1080p; 15:54): The actress discusses working with Michael Mann on only her second film (after Peggy Sue Got Married), her memories of shooting the tiger scene, and her preparation for her role as a blind woman.

Francis is Gone Forever: Interview with actor Tom Noonan (1080p; 22:03): Noonan discusses his career prior to being cast in the film, the decision to cut himself off from the rest of the cast (especially Petersen) to better prepare himself for the role, and shooting his monologue scene with Lounds.

The Eye of the Storm: Interview with Director of Photography Dante Spinotti (1080p: 35:56): The cinematographer discusses working on Manhunter, including many of the stylistic and artistic choices made on the film.

The Music of “Manhunter” (1080p; 42:22): Michel Rubini, Barry Andrews (of Shriekback), Gary Putnam (of The Prime Movers), Rick Shaffer (of The Reds), and Gene Stashuk (of Red 7) discuss their contributions to the film’s score.

The First Lecktor: Interview with Brian Cox (1080p; 40:29): The actor speaks at length about working on the film (and being recommended by Brian Dennehy, who was also up for the role of Lecktor).

Manhunter: Director’s Cut (1080p*; 124:09): Michael Mann’s “official” director’s cut, taking the 1080p transfer of the theatrical cut and intercut with sequences from the standard definition director’s cut. This additional or alternate footage is of differing quality, ranging from acceptable (likely taken from a 1″ broadcast master) to barely watchable (taken from the director’s own VHS copy). Much of the added footage doesn’t really add anything to the movie, and in some cases disrupts the pacing.

Audio Commentary with Writer-Director Michael Mann: This commentary track accompanies the HD hybrid version of the director’s cut, as Mann discusses various locations used in the film, some of the research he completed while writing the screenplay, making a film on a tight schedule and budget, and other various issues he had with the production. Mann also notes that, due to the studio’s bankruptcy, many of the original trims used in the director’s cut have been lost forever.

Manhunter: Director’s Cut (480i; 124:09): The director’s cut as it appeared on the previous Anchor Bay release, with Dolby Digital 2.0 audio.

The Manhunter Look: A Conversation with Cinematographer Dante Spinotti (upscaled 1080i; 10:04): An archival interview from the Anchor Bay DVD.

For fans who have been holding on to their Anchor Bay DVDs of Manhunter, this new release essentially replaces those discs by porting over those special features, plus adds new interviews and a look at the creation of the music score. This is likely about as close as we will get to a definitive edition. 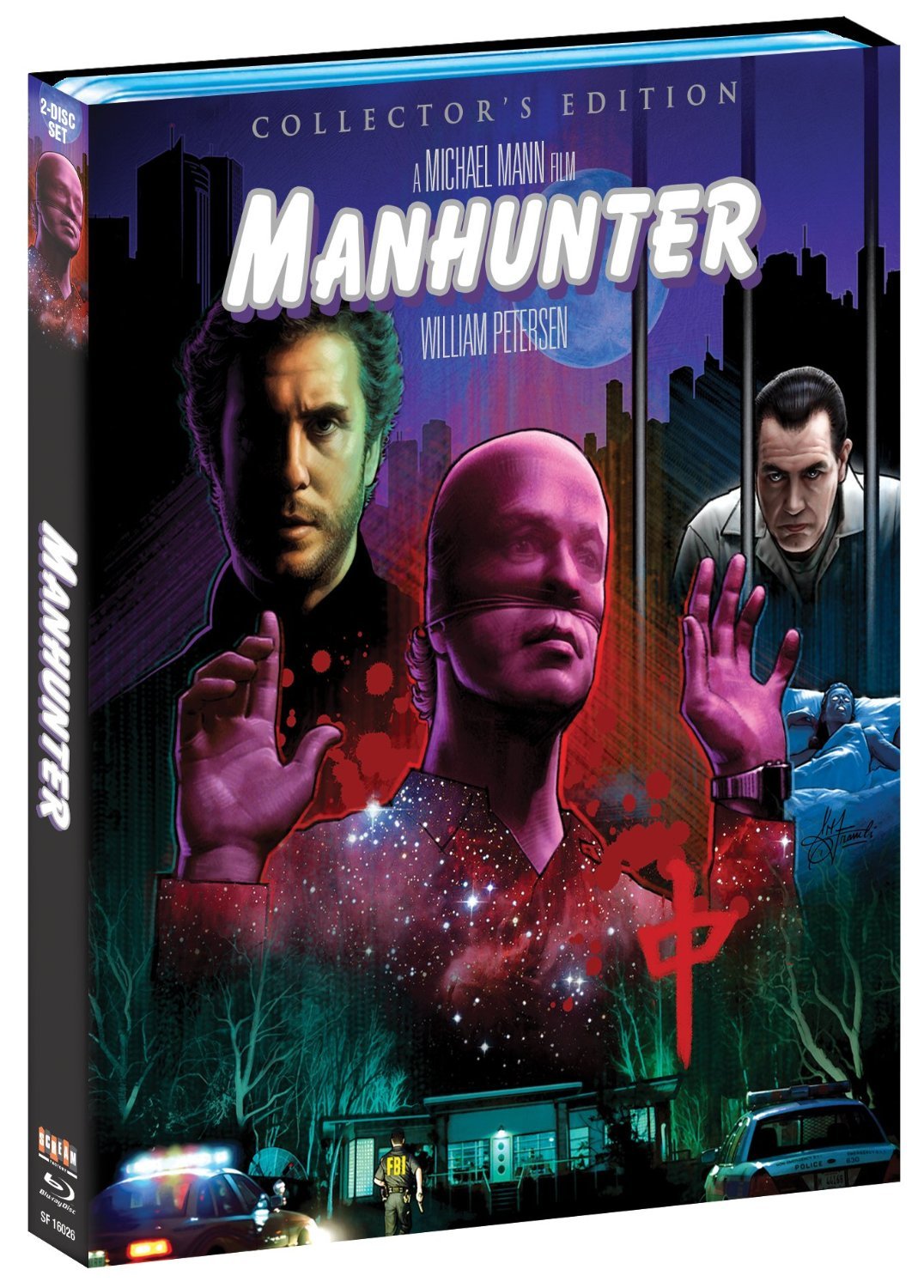