For Universal Pictures in the 1950’s (known then as Universal-International), the Western genre seemed to be their bread and butter at the box office. Whether it was the pairing of director Anthony Mann and actor James Stewart or frequently utilizing Audie Murphy, the studio certainly had no problem in finding stories to tell about the West. 1955’s Man Without a Star utilized the talents of two large talents in Hollywood – leading man Kirk Douglas and legendary director King Vidor. Previously released on DVD and MOD by Universal, Kino has picked up the film for its Blu-ray debut.

Easygoing cowboy Dempsey Rae (Kirk Douglas) wanders from town to town across the West, following no particular star and fenced in by nothing and nobody. Along with young cowboy Jeff Jimson (William Campbell), they arrive in a small Wyoming town and find work on a cattle ranch owned by Reed Bowman (Jeanne Crain). However, they soon get entangled in a range war that will test their friendship as well as pit Dempsey against a rival from his past.

Man Without a Star makes no pretensions about itself, nor does it strive to make a bold statement about the world we live in; it’s simply good, old fashioned entertainment. King Vidor manages to keep a steady hand throughout, keeping the action and drama rolling along at a good pace without making any hard turns that take the story off the rails. In addition, Vidor makes great use of the widescreen frame (one of the few movies he would make in widescreen) and gives the story and setting ample room to breathe; a combination of the steady direction and use of widescreen here likely led him to snaring the director’s chair for the Dino De Laurentiis produced adaptation of War and Peace for his next project). There’s really not a whole lot to complain about here other than the fact that this would be the last time the famed director would work in the genre, with his most notable work there being the famed Duel in the Sun (1946). Other than that, the film is pure fun – it may not be a classic like Duel, but it’s enjoyable just the same.

Kirk Douglas has one of his usual charming and dominant performances as Dempsey; he even gets to sing and play the banjo here – which he does quite well I might add. William Campbell does a solid job as the tenderfoot whom Dempsey befriends along the way; it’s a solid part in the cult actor’s career. Claire Trevor basically gives an extension of her character in Stagecoach, although the characters names are different; Jeanne Crain stands out as the hard nosed rancher who may end up igniting a range war. Other notable appearances include Richard Boone as a cowhand whom Dempsey knows from his past, Jay C. Flippen as the ranch foreman, Eddy C. Waller as a rival rancher, Myrna Hansen as his daughter, Mara Corday as a prostitute, Sheb Wooley (the man behind the song about the one-eyed, one-horned, flying purple people eater) and Malcolm Atterbury as fellow ranch hands,  longtime Republic Pictures heavy Roy Barcroft as the town’s sheriff, and an uncredited Jack Elam as the knife wielding ruffian at the beginning of the movie.

Kino’s HD transfer of the movie is presented in its original 2:00:1 aspect ratio. Film grain is solid and organic, with fine details given a faithful rendering. The film was shot in three-strip Technicolor (one of the last Hollywood productions to do so), so there are some instances of alignment issues but they’re mostly minor and not too distracting. There’s also minor instances of dirt and scratches present, but these too are also fairly minor; overall, this is likely the best the film will ever look on home video.

The film’s original soundtrack is presented on a 2.0 DTS-HD Master Audio track for this release. Dialogue is strong and clear throughout along with the sound mix; the score, along with the title song, has solid fidelity and ambiance given to it without too much problems in terms of distortion, crackling, or hissing. This is likely the best the film has and will ever sound on home video.

Commentary by film historian Toby Roan – In this newly recorded commentary track, Roan talks about the movie and its notable players, stopping along the way to provide some interesting insight and a few humorous remarks along the way. Overall, a decent track, much like the one Roan provided on Kino’s release of Bend of the River.

Bonus KLSC Trailers – The Indian Fighter, The Devil’s Disciple, The Vikings, The Way West, Duel in the Sun, and Ruby Gentry

While not a bonafide classic Western, Man Without a Star is still an entertaining Western that’s a great showcase for its leading man. Kino’s release of the film boast solid marks for both picture and audio quality as well as an informative commentary track to complement it. Recommended for fans of Kirk Douglas and Westerns and worthy of upgrading from the DVD. 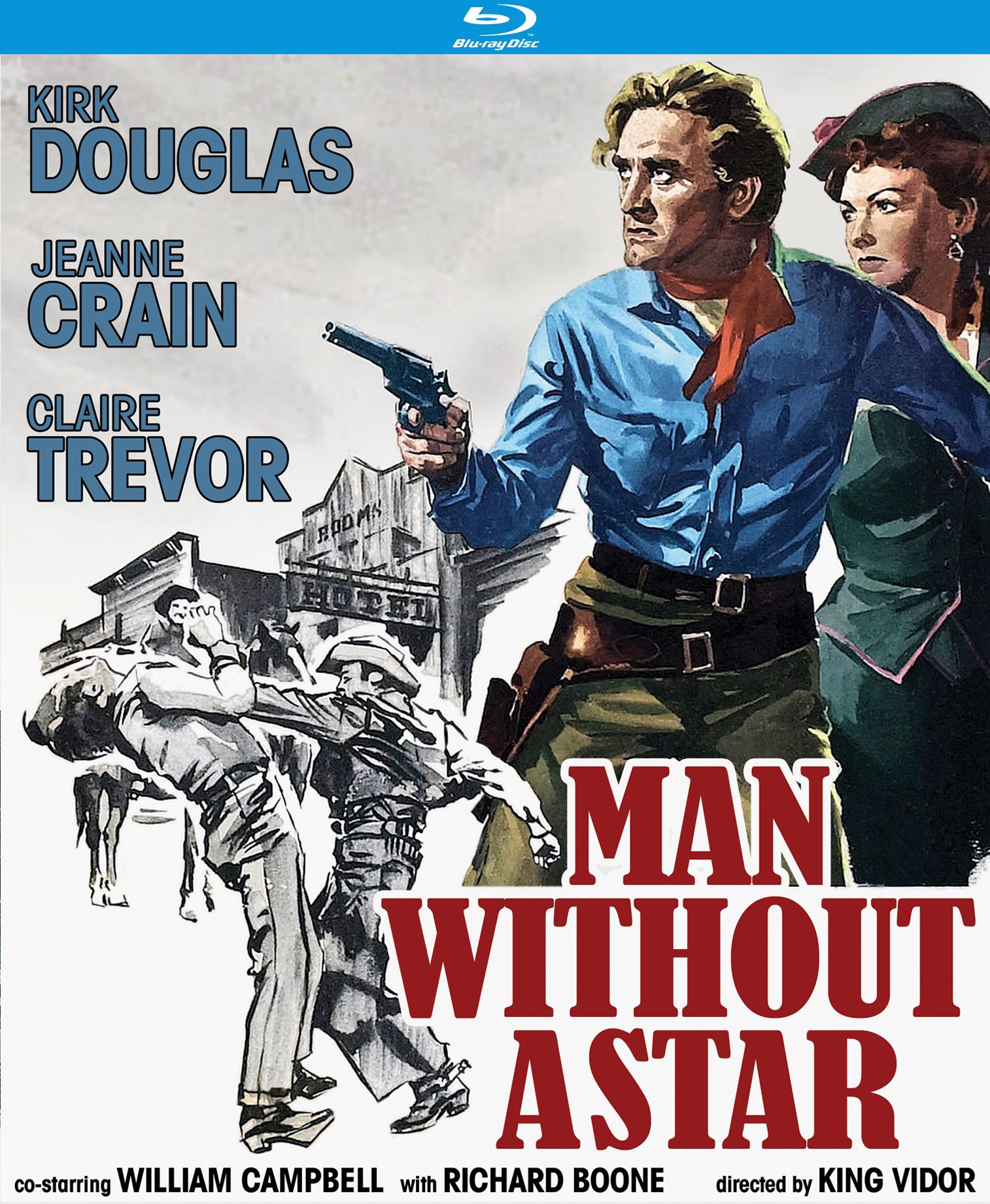