Forum List What's new Dark Style Change width
Log in Register
What's new Search
Menu
Log in
Register
Navigation
Install the app
More options
Dark Style
Close Menu
Posted on December 15, 2019 by t1g3r5fan
You are using an out of date browser. It may not display this or other websites correctly.
You should upgrade or use an alternative browser.

For a long time in Hollywood up until the 1950’s, biopics often chronicled the lives of composers, politicians, and many other historical figures, but the spotlight was rarely turned on one of their own. With the release of Man of a Thousand Faces, Hollywood looked at one of the great stars of silent cinema – Lon Chaney – and his personal life as well. Previously released by Universal on DVD, Arrow has licensed the film for Blu-ray release as part of their Academy line.

Lon Chaney (James Cagney) became one of silent cinema’s most notable stars, but the road to success was paved by many trials and tribulations. His early days as a vaudeville clown were marked by a troubled marriage to Cleva Creighton (Dorothy Malone); his career nearly ended when Cleva publicly attempts suicide during one of his performances. After moving to Hollywood with his new wife Hazel Bennet (Jane Greer), he starts over as an extra in the movies and uses his expertise in makeup to move up the ladder; however, his personal problems mirror the monsters he portrayed and further proved that Chaney achieved his triumphs through adversity.

As one of the earliest Hollywood biopics, Man of a Thousand Faces is a solid look at the career of one of the most gifted stars to ever grace the screen. The movie has it greatest strength in showing some of the personal details of Chaney’s life without resorting to an overtly melodramatic tone; another high point is some of the recreations of Chaney’s best known works like The Phantom of the Opera (1925) and The Hunchback of Notre Dame (1923) – even though makeup artist Bud Westmore’s recreation of some of Chaney’s best known ‘faces’ represent only a fraction of their original greatness. While the Oscar nominated screenplay does take some liberties with the details of Chaney’s life and career, the most notable deviation from real life comes at the end of the movie – the real life Chaney died in a hospital and Creighton Chaney (better known to many film lovers as Lon Chaney Jr.) only entered movies full time a few years after his father’s death due to financial problems. Slight creative differences aside, Man of a Thousand Faces is still an affectionate, if not entirely sentimental look at an actor whose own personal struggles only helped to highlight the many flawed and interesting characters he played in his tragically brief movie career.

The legendary James Cagney has one of his best late career performances as the famed Chaney; he even got a chance to show off his dancing skills during the vaudeville segments of the film. Fresh off of an Oscar win for Written on the Wind (1956), Dorothy Malone breathes life into another emotionally troubled character in Cleva Creighton Chaney; her work with Douglas Sirk suitably prepared her for the more melodramatic moments in the film, especially when it involved her character. Jane Greer, more familiar to film noir fans for her performance in Out of the Past (1947), is solid as Lon’s second wife, Hazel Bennet Chaney; Greer’s more congenial nature to her performance serves as a great contrast to the more emotionally bombastic Cleva. Other performances worth mentioning are the late Robert Evans as the famed MGM producer/executive Irving Thalberg (Evans himself would become studio chief of Paramount Pictures in the late 1960’s), Jim Backus as Chaney’s press agent, Marjorie Rambeau as a bit player whom Lon encounters upon arriving in Hollywood, Celia Lovsky and Nolan Leary as Lon’s deaf parents, Jeanne Cagney as Lon’s sister (another instance in which life imitates art here), vaudevillian Clarence Kolb as himself, Roger Smith, Robert Lydon, Rickie Sorenson, and Dennis Rush as Creighton Chaney in various stages of his life, Jack Albertson as Lon’s doctor, Philip Van Zandt as silent film director George Loane Tucker, and Hank Mann and Snub Pollard as a pair of waiters in a slapstick film.

The film is presented in its original 2:35:1 CinemaScope ratio in this new HD transfer taken from the original film elements. Film grain is strong and organic throughout, with fine details rendered with great faithfulness and clarity; gray scale is also strong with inky blacks and next to no instances of age related problems like scratches, dirt, tears, or warping present. This transfer represents – by far – the best the movie has ever looked on home video and is leaps and bounds over the previous Universal DVD in terms of quality.

The film’s original mono soundtrack is presented on a PCM track for this release. Dialogue and sound effects are clear and strong throughout; Frank Skinner’s score is also given great fidelity and ambiance without being intrusive on the dialogue and sound mix. This audio track is a great improvement over the previous Universal DVD and represents the best the film will likely ever sound on home video.

Commentary by film historian Tim Lucas – Recorded for this release, Lucas goes over the production history of the movie as well as some of the anachronisms between the film and Lon Chaney’s real life. A very insightful and informative track to complement this release.

The Man Behind a Thousand Faces (20:53) – Film critic Kim Newman examines the career and legacy of Lon Chaney in this brand new featurette.

Booklet feat. an essay by Vic Pratt and original reviews of the movie (1st printing only)

As one of the first biopics on Hollywood, Man of a Thousand Faces is an affectionate look at a bygone era of filmmaking and a tribute to the incomparable Lon Chaney. Arrow has done another stellar job with this release, scoring high marks in audio and visual quality in addition to a couple of great special features going into detail about the film and its subject. Very highly recommended.

Thank you Mychal for your fine and informative review. I have the new Blu coming, and now really look forward with confidence to enjoying it soon! 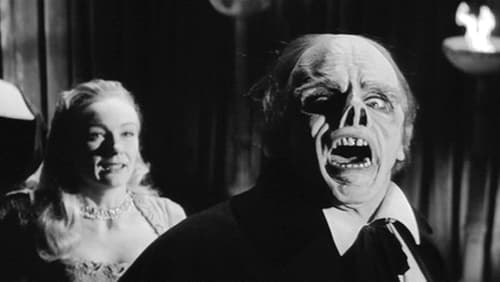 Thank you for your fine review as I'm in total agreement with it. An excellent Blu-ray from Arrow.

I need to get this as I’m crazy for B&amp;W CinemaScope. I had no idea this was widescreen as I’d only seen it during the sixties as a Sunday matinee TV flick.
You must log in or register to reply here.

Blu-ray Review A Few Words About A few words about...™ - Lon Chaney: Before the Thousand Faces -- in Blu-ray
2