A poignant coming of age story set in the late 1950s and concerning sisters vying for the attention of the same boy, Robert Mulligan’s The Man in the Moon treads a careful path between straight out romance and family drama.

A poignant coming of age story set in the late 1950s and concerning sisters vying for the attention of the same boy, Robert Mulligan’s The Man in the Moon treads a careful path between straight out romance and family drama. The movie is so beautifully etched in mood and tone that it fairly sweeps the viewer up in its spell, and the Southern atmosphere in its particular place and time is wonderfully captured and presented.

Siblings Maureen (Emily Warfield) and Dani (Reece Witherspoon) Trant are spending one last summer together before the eighteen-year old Maureen heads off to Duke and fourteen-year old Dani gets a room to herself where she can listen to Elvis records and dream about boys and romance to her heart’s content. Into their lives comes Marie Foster (Gail Strickland) who’s moved back into their Louisiana parish after the death of her husband with three strapping boys in tow. The oldest, seventeen-year old Court (Jason London), has assumed the patriarchal duties around the homestead including farming the land while the young twins (Derek and Spencer Ball) are just interesting in being rambunctious. When Dani takes her first look at Court at the pond on the Foster’s property, all thoughts of Elvis are put aside, and she develops a deep crush on the young man. Court finds her a fun-loving swimming buddy and even grants her wish for him to be her first kiss, but when Court finally locks eyes on Maureen, pretty much the belle of the parish, any friendship with Dani becomes an afterthought.

Jenny Wingfield’s screenplay does a fine job capturing the Deep Southern camaraderie of a small Louisiana town where neighbors fetch extra rock salt for the ice cream churn and folks provide meals for surviving victims when tragedy strikes. The family unit also comes in for some close and rather loving scrutiny as plot events unfold and we see what close ties and lengthy histories the town inhabitants have with one another. (It’s not all puppies and warm hugs, however; the father of one of Maureen’s dates has some rather obvious hots for her, and the date himself – played by Bentley Mitchum – is going to go as far with her as she’ll let him get away with.) The tragedy inherent in the story seems maybe ladled on a bit too thickly for characters so very young (Maureen is about to go to a large university where there will be ample opportunities to find love; at least Wingfield’s script resists Maureen becoming pregnant). Director Robert Mulligan lets the Freddie Francis-helmed camera take in the meadows and wooded areas of the place where people can go skinny dipping in the nearby pond without too much fear of discovery and life passes by at a much more leisurely pace than today (even if Dani is continually dashing from place to place as she looks for summer adventure). Even a climactic father-daughter talk is filmed in one of the most striking locations imaginable (a cyprus swamp in Natchitoches, Louisiana), and the entire summer odyssey of these characters seems like a time and place that seems far, far removed from today.

What a wonderful debut film this is for Reece Witherspoon who doesn’t take a wrong step as the adolescent undergoing her first painful experiences with feelings of love, and her summer journey toward greater maturity and understanding of the world is really memorable. The other truly standout performance in the film is by Sam Waterston as the Trant patriarch. Gently stern but with real horse sense about raising his children, this is the father everyone would wish to have had in his life. Tess Harper is the no-nonsense Trant mother, but an accident leaves her hospital-bound for much of the movie’s running time. As the young lovers, Emily Warfield and Jason London have looks to spare and are both very appealing without ever reaching quite the depths of emotion that Witherspoon and Waterston manage to produce for their characters. Gail Strickland as Court’s loving mother adds another agreeable performance to her resume, while Bentley Mitchum as the handsy Billy Sanders and Ernie Lively as his lecherous dad add just the negative leavening to an otherwise sweet, bucolic recipe.

The film’s 1.85:1 theatrical aspect ratio is faithfully executed in this 1080p transfer using the AVC codec. Despite a few intermittent specks and flecks, image quality is generally outstanding, and color is spot-on with believable and appealing skin tones. Black levels are fine though there is one mediocrely handled day-for-night swimming sequence that seems poorly color timed. The movie has been divided into 24 chapters.

The DTS-HD Master Audio 2.0 stereo sound mix offer rather quiet activity in the left and right channels in the early going. Elvis Presley’s  “Loving You” gets a couple of plays in the center channel where the dialogue has been placed, but later songs and James Newton Howard’s background score get some more than decent spread through the soundfield along with effective atmospheric effects of bucolic sounds of the country and an impressive summer storm sequence. No age-related problems with hiss and crackle are present at all.

Six-Page Booklet: contains some color stills, original poster art on the back cover, and film historian Julie Kirgo’s essay full of praise for the film’s achievements.

The Man in the Moon is a tender and evocative coming-of-age story painting the picture of a time and place that will bring back many memories from times past for many of those who give it a chance. There are only 3,000 copies of this Blu-ray available. Those interested in purchasing it should go to either www.twilighttimemovies.com or www.screenarchives.com to see if product is still in stock. Information about the movie can also be found via Facebook at www.facebook.com/twilighttimemovies.

I'm a real fan of this movie and received it several weeks ago. I'm more a fan of the movie than you, but somewhat less pleased with the transfer. It's as good as we're likely to ever get, but I find it a little uneven. The great looks jaw droppingly great, but the scene to scene consistency is a little lacking. Part of this is probably due to budget constraints when the movie was made, but I suspect part is probably in the transfer and source material. This isn't exactly the kind of title that will get a Robert Harris level restoration, so they worked with what they had. I don't have a problem with the "night" scene you mentioned, because I have always thought the intention was to make this movie (which was released in 1990) look, in a lot of ways, like it was actually made at the time it was set, in the 1950s. At that time, it was standard for nighttime scenes to actually be shot in the middle of the day and underexposed to appear to be night. Many scenes have a degree and style of artificial lighting, especially outdoors, that were not used in 1990, but were typical in the '50s.

The best scenes are beyond stunning and restore a softness I never even dreamed were in the film stock. There is a scene maybe 3/4 of the way through where Dani (Reese Witherspoon) is talking to Court (Jason London) as he works in a barn. At the end of the scene, the camera looks through the barn as Dani walks out the back. The shot ranges from direct sunlight to deep shadow, and every single part of the image has detail. It has a beautifully soft, dreamlike appearance that some will probably complain about being flat, but I expect this is exactly what it's supposed to look like. There's hardly a complete black or white anywhere in the movie, except in one scene, where Dani's father comes home during a rainstorm. I think that one moment of blackness reflects his mood in that scene.

There are a lot of other factors that show this movie is supposed to look like it was actually made in the '50s. I don't think there's a single zoom in the entire movie, except a very subtle one at the end during a blend between Dani having a fantasy memory and reality. Otherwise it's all camera movement.

It's easy to under appreciate The Man In the Moon, but I think that's a mistake. On the surface it seems to be a pretty little bit of fluff, except when you consider how it approaches the "coming of age" subject, you might appreciate more how it deals with it. I've come to view it a lot like the '50s melodramas from Douglas Sirk. Or course, it didn't have to sneak things past the production code like Sirk did, but it is made as though it did. This is where some people have problems with the story. It's not a G rated family pic. It's definitely PG-13, because it addresses what "coming of age" really means, which is sexuality. It doesn't whitewash the topic, though it doesn't overdo it either. 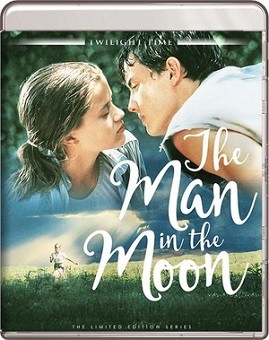