Forum List What's new Dark Style Change width
Log in Register
What's new Search
Menu
Log in
Register
Navigation
Install the app
More options
Dark Style
Close Menu
Posted on May 27, 2017 by Matt Hough
You are using an out of date browser. It may not display this or other websites correctly.
You should upgrade or use an alternative browser.
A cerebral but galvanizing character study 4 Stars

A scintillating theater piece gets a terrific cinematic treatment in Arthur Hiller’s The Man in the Glass Booth.

The American Film Theatre was an ambitious, subscription-based experiment which lasted from 1973-1975 in which distinguished plays and musicals, lacking in broad, general cinematic appeal but containing important themes and ideas, could be brought to a more thoughtful and discerning moviegoing audience. Over its two seasons of existence, fourteen films were presented: eight in its initial season and six in the follow-up season. While season subscription ticketing snafus and the limited availability of play dates (four performances only over a two-day period) plagued the series and prevented it from becoming a massive hit, the project did produce many wonderful, worthwhile film versions of plays and performances which might otherwise have faded into the mists of time had they not been captured on film. One such triumphant project was Arthur Hiller’s The Man in the Glass Booth, a galvanizing exploration of the aftermath of the Holocaust focusing on one man’s coping with his guilt of participation in a most surprising and original fashion.

Millionaire entrepreneur Arthur Goldman (Maximilian Schell) never passes on an opportunity to celebrate his Jewishness, and his executive secretary Charlie Cohn (Lawrence Pressman) and his valet Jack (Henry Brown) are often the beneficiaries of his largess. But despite his generally ebullient nature, Goldman has a creeping feeling that someone, perhaps concentration commandant Colonel Karl Dorff, is stalking him, ready to pounce on him at any moment. How shocking, then, it is when Israeli secret agents burst into his New York townhouse and arrest Goldman for being not a Jewish businessman but a Nazi war criminal, Colonel Karl Adolph Dorff, head of the Mauthausen concentration camp! Spirited away to Jerusalem for trial, Goldman forces his accusers to face not only his presumed guilt – but to think about the parts they have all played leading right to this particular moment in their lives.

Playwright Edward Anhalt has adapted Robert Shaw’s Tony-nominated play for the screen stressing emotional extremes somewhat tramped down in the stage piece at the expense of the play’s more suspenseful gamesmanship over the identity of the man on trial. In the play and the film, we don’t really know the true identity of the piece’s protagonist until the final ten minutes or so when the themes of guilt, remonstration, and penance are made clear, but until we get there, it’s an emotional free-for-all not only for the Goldman/Dorff character but for all of the people in his orbit and the very vocal and volatile courtroom participants which form the majority of the play and film’s second half. While a work of the American Film Theatre, make no mistake: this is a film and not simply a recording of a stage performance. Director Arthur Hiller takes the camera outside to the terrace of Goldman’s luxurious apartment overlooking Fifth Avenue and lets us poke and prod around Goldman’s life: into his secret locked room which holds concentration camp mementos and at a grand banquet where Goldman holds court discussing the life of Jesus Christ (referring to him throughout the piece as “JC” as if they were on familial terms). The courtroom testimonies and subsequent reactions in the second half may not have the power and thrust of the Holocaust discussions in Judgment at Nuremberg, for example, but they’re potent and effective on their own and add additional colors to what we know about the atrocities which went on in the camps during the war.

Maximilian Schell earned an Oscar nomination for his performance (the other American Film Theatre productions weren’t eligible for the Oscars due to their limited playdate availability which ran counter to the Academy by-laws, but this film was given a special two-week run in Los Angeles to quality it for consideration), and it’s by all accounts a real tour-de-force. Perhaps overly theatrical surrounded by the more naturalistic playing by the rest of the cast, Schell’s work nevertheless remains electric, and you never can take your eyes off him even as others, particularly during the courtroom testimonies as he reacts to the evidence being proffered, hold center stage. Lawrence Pressman gives a touching performance as Goldman’s right-hand man who refuses to think the worst of a man he’s come to love. As the prosecuting attorney, Lois Nettleton is effective without outrageous courtroom histrionics or showboating. Luther Adler is also quietly efficient as the presiding judge at Dorff’s trial.

The film’s original theatrical aspect ratio of 1.85:1 is faithfully represented in this 1080p transfer using the AVC codec. Taken from the camera negative, the transfer nevertheless contains a fair amount of speckles and dirt, especially heavy during the opening titles and near film’s end. There is also some spotting to be seen in the film’s second half. Sharpness otherwise is very good, and color rendition is more than adequate even if skin tones occasionally veer toward pink. The movie has been divided into 8 chapters, and the movie does feature an intermission.

The PCM 2.0 mono sound mix replicates the original monaural soundtrack of the movie. Dialogue has been exceptionally well recorded and has been professionally combined with expressive sound effects (Goldman remembering a collection of sounds from the camp in two different sections of the film) and just a bit of music at certain junctures. There are no obvious signs of aural artifacts like hiss, flutter, crackle, or thumping.

Arthur Hiller Interview (22:21, HD): a 2002 interview with the director who recalls memories of his working privately with star Maximilian Schell and his overwhelming reaction to seeing the movie again thirty years after its premiere.

Edie Landau Interview (26:16, HD): a 2002 interview with the widow of American Film Theatre founder Ely Landau discusses the genesis of the film series, how the productions were accomplished, and the problems they encountered along the way.

Ely Landau in Front of the Camera (6:30, HD): a promotional short filmed for playing at the end of the first season of the American Film Theatre.

AFT Trailers: Butley, A Delicate Balance, Galileo, The Homecoming, The Iceman Cometh, Jacques Brel Is Alive and Well, Lost in the Stars, Luther, The Maids, Rhinoceros, The Three Sisters.

I saw this in the original AFT series, what a wonderful thing that was.

This film is really worth seeing. Matt's description of it is quite good but the film cannot be described, only experienced.

Here's hoping this means Kino will release more of the AFT projects to BD, as they have already released the complete series on DVD.

Stephen_J_H said:
Here's hoping this means Kino will release more of the AFT projects to BD, as they have already released the complete series on DVD.
Click to expand...

I hope that they do. It would be a wonderful gift to get them all on Blu-ray but particularly the ones I really loved (A Delicate Balance, Butley, The Maids, The Iceman Cometh).

Lost in the Stars, just to get the wonderful Kurt Weill score.
P

Matt Hough said:
I hope that they do. It would be a wonderful gift to get them all on Blu-ray but particularly the ones I really loved (A Delicate Balance, Butley, The Maids, The Iceman Cometh).
Click to expand...

O'Neill and Albee? I second that, Matt. Bring it on, Kino.
P.S. If memory serves me correctly, wasn't Jaques Brel also a part of this ATF series, as well?
Last edited: May 31, 2017

PMF said:
O'Neill and Albee? I second that, Matt. Bring it on, Kino.
P.S. If memory serves me correctly, wasn't Jaques Brel also a part of this ATF series, as well?
Click to expand...

Yes, it's listed in my review in the AFT list of trailers on the disc.
P

Matt Hough said:
Yes, it's listed in my review in the AFT list of trailers on the disc.
Click to expand...

"We're on a Carousel, a crazy Carousel..."
What a grand time we're living in; we, the film aficionado. 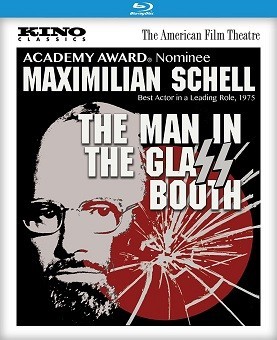