Forum List What's new Dark Style Change width
Log in Register
What's new Search
Menu
Log in
Register
Navigation
Install the app
More options
Dark Style
Close Menu
Posted on January 10, 2020 by Todd Erwin
You are using an out of date browser. It may not display this or other websites correctly.
You should upgrade or use an alternative browser.
False advertising? 4 Stars

Disney’s Maleficent: Mistress of Evil looks and sounds great on UHD Blu-ray, but the movie feels a bit unnecessary and does not deliver what its trailer or title implies.

Maleficent, from 2014, was an interesting take on the Sleeping Beauty legend, making the title character, played by Angelina Jolie, Princess Aurora’s (Elle Fanning) Godmother and not an evil, villainous creature. With that film’s success, a sequel was inevitable, and the sequel’s trailers and title, Maleficent: Mistress of Evil, would lead one to believe that we (the audience) would now see the story on how Maleficent became the evil witch as portrayed in the classic fairy tale. But that is not what this movie is about…

Five years after the events in the first film, Princess Aurora is living as Queen of the Moors, presiding over the magical creatures of the kingdom. Prince Philip (Harris Dickinson) from Ulstead arrives with a marriage proposal, to which Aurora agrees, but requests that her Godmother Maleficent visit Ulstead to attend an engagement dinner with his parents, King John (Robert Lindsay) and Queen Ingrith (Michelle Pfeiffer). Maleficent reluctantly agrees, but the dinner does not go well, with King John seemingly placed under a spell to which Maleficent is accused of, leading to an all out war between Ulstead and the Moors.

Does Maleficent turn evil? Not really. She is rescued by another Dark Fairy, Conal (Chiwetel Ejiofor), who has taken her to their secluded hideout. It is there that she meets other Dark Fairies, including Borra (Ed Skein) who wants to wage war against the humans. Meanwhile, back at Ulstead, Queen Ingrith is hatching her plan to perform an act of genocide against the fairies of the Moors by having Lickspittle (Warwick Davis) create a poison and release it within the locked church where the wedding is supposed to occur. Of course, the Dark Fairies attack Ulstead, but it is Maleficent, Aurora, and Philip that eventually save the day and restore peace.

Maleficent: Mistress of Evil is a tale of bigotry and prejudice, overcoming hate and restoring peace, which is fine, except that I had expected this to be a darker tale of Maleficent’s turn to evil, as the title suggests. It is not Maleficent who is the titular “Mistress of Evil, but Queen Ingrith instead. The cast is impressive, with Angelina Jolie often chewing the scenery with her fun dialogue and Michelle Pfeiffer relishing the chance to play a villain. There just isn’t a whole lot of depth to the story, and the roles of Aurora and Philip feel underwritten, essentially wasting the talents of Elle Fanning and Harris Dickinson. On the plus side, though, the visual effects are quite dazzling, so you do have that to take your mind off the lackluster story.

Maleficent: Mistress of Evil was captured at a resolution of 8K on Panavision Millenium (which uses a RED sensor) and RED Helium 8K cameras, and completed as a 2K digital intermediate in the 2.39:1 theatrical apsect ratio (with some IMAX sequences at 1.90:1). Disney’s upscaled 2160p HEVC-encoded transfer for this UHD Blu-ray release retains the movie’s traditional 2.39:1 aspect ratio, adding HDR10 high dynamic range. Despite being an upscale, there is a noticeable improvement in nearly all areas over the included Blu-ray edition. Detail is much more defined, resulting in a much sharper picture overall. The intricacies of the costumes and even makeup are much more evident here, although some of the CGI work is more apparent as well. Colors appear more natural, with the wider color gamut, particularly in the lush greens. Blacks levels are also superb, with excellent shadow detail during even the darkest scenes (and there are quite a few in this film).

This is definitely one of the better Dolby Atmos tracks on a Disney UHD Blu-ray release in a long time. The track offers a wide and immersive soundstage, with discrete effects appearing in precise locations. It never sounds compressed or lacking in dynamic range, and LFE never sounds anemic, either. Dialogue is clear and understandable throughout. This is a very welcome surprise.

All of the special features can be found on the included Blu-ray editrion of the film.

Digital Copy: An insert contains a code to redeem a digital copy (in UHD where available) on Movies Anywhere, which also gives you access to an additional digital exclusive special feature on the character of Lickspitlle.

Maleficent: Mistress of Evil is not quite the movie that was advertised, but fans will probably enjoy it. Presentation is excellent (even the Dolby Atmos track for a change), but the extras are fairly lackluster and often too short. 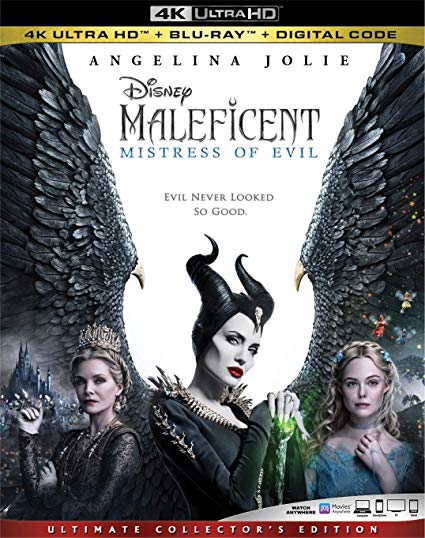