Forum List What's new Dark Style Change width
Log in Register
What's new Search
Menu
Log in
Register
Navigation
Install the app
More options
Dark Style
Close Menu
Posted on October 13, 2019 by t1g3r5fan
You are using an out of date browser. It may not display this or other websites correctly.
You should upgrade or use an alternative browser.
Douglas Sirk masterpiece gets Blu upgrade 4.5 Stars

In the 1950’s, two studios seemed to have a lock in producing melodramatic movies of high quality: 20th Century Fox (Peyton Place being the most notable example) and Universal-International. The latter studio benefited from the presence of Douglas Sirk, a director who began his career in Germany before moving to Hollywood in the 1940’s. It’s here with Magnificent Obsession – a remake of a 1935 film produced by the studio – that Sirk would really hit his stride and become a master of the melodrama. Criterion upgrades their previous DVD release with a brand new Blu-ray release of both the 1935 and 1954 versions of the movie.

A speedboat accident leaves playboy Bob Merrick (Rock Hudson) in need of the town’s resuscitator; however, that need also inadvertently leads to the death of the beloved Dr. Wayne Phillips at the other side of the lake. As he recovers – and consumed by guilt over the doctor’s death – he learns about the doctor’s method of charitable giving in secret and believes this could be the key to his redemption. It also leads him to a romance with the doctor’s widow (Jane Wyman), who goes from resenting him to needing him when tragedy intervenes…

A master class in the melodrama genre, Magnificent Obsession is a remarkable example of how to handle a soap opera with both style and class. Reworking an earlier film adaptation of the Lloyd C. Douglas novel which this film was based on, screenwriter Robert Blees jettisoned the comedic angle of the earlier 1935 version in favor for a more realistic approach in telling the story. Douglas Sirk should also be commended in keeping the plot grounded in that core of reality while adding some of his own distinctive touches to the story; some of his incisive and wry looks on society do manage to find their way through at certain points in the story. As the focal point of the distinctive “Sirk touch”, Magnificent Obsession is not only a superior melodrama but a great love story that stands out as probably the definitive film version of its source material.

In the role that helped make him a true star, Rock Hudson is a believable Bob Merrick; he would parlay this success into greater fame with his only Oscar nomination for Giant (1956) as well as the three romantic comedies he co-starred with Doris Day. Jane Wyman – who would earn the film’s lone Oscar nomination for her performance here – stands out as Helen Phillips, the woman who undergoes a similar spiritual transformation along with Bob, whom she later comes to love; Otto Kruger casts a memorable impression as the artist who introduces Bob to the charitable way of life the late Dr. Phillips led. Agnes Moorehead (Endora herself) has another scene stealing part as the nurse of Dr. Phillips’ clinic and friend of the family; Barbara Rush has a typical ingenue part as the daughter of Dr. Phillips. Other notable appearances include Gregg Palmer as Tom Masterson, Paul Cavanagh and Rudolph Anders as a couple of European doctors who are unable to operate on Helen (setting up the film’s climax), Judy Nugent as the young girl who befriends a blind Helen, Helen Kleeb as a recipient of Dr. Phillips’ charitable giving who tries to repay Helen following his death, and an uncredited Jack Kelly as a boat mechanic who witnesses the crash that propels the story (pun intended).

The original 2:00:1 aspect ratio is preserved in this HD transfer of the movie. Film grain is organic throughout with fine details rendered faithfully; colors are strong and vivid with only minor issues like registry errors, dirt, scratches, dust, and tears present in the transfer. Overall, this is an improvement on the previous Criterion DVD and likely represents the best the film has and will ever look on home video.

The original mono soundtrack is presented on a PCM audio track for this release. Dialogue is both strong and clear along with the sound mix; Frank Skinner’s score (and accompanying selections of classical music) are given great ambiance and fidelity without being too overpowering or intrusive. There’s nary an instance of issues like distortion, crackling, popping, or hissing, which means that this is likely the best the film will ever sound on home video.

Commentary with film scholar Thomas Doherty – Carried over from Criterion’s previous DVD release, the film scholar not only talks about the movie, but goes into some of the larger themes and connections in the era it was released as well as Douglas Sirk’s career.

Magnificent Obsession – The 1935 version – Universal’s first film adaptation of the Lloyd C. Douglas novel, starring Robert Taylor and Irene Dunne, is presented on disc 2 of this release; this print of the movie runs 101 minutes, likely taken from a re-release of the movie.

From UFA to Hollywood: Douglas Sirk Remembers (1:22:36) – This 1991 documentary, taken from an 1980 interview with the director, traces his career from Germany to Hollywood as well as the distinctive directorial touches found in his works.

Core of Reality: An Interview with Screenwriter Robert Blees (19:19) – This 2009 interview has the screenwriter talking about how he approached the adaptation of the novel as well as the 1935 version that preceded it.

A Tribute to Douglas Sirk: An Interview with Filmmaker Allison Anders (9:10) – Carried over from the Criterion DVD, the filmmaker talks about the movie as well as the influence in had on her.

Beyond Melodrama: An Interview with Filmmaker Kathryn Bigelow (13:17) – Carried over from the Criterion DVD, the filmmaker not only talks about the movie, but also about an encounter she had with Douglas Sirk.

Fold out with an essay by film critic Geoffrey O’Brien

Magnificent Obsession has survived over the years as both a great love story and a major part of Douglas Sirk’s distinctive style in subversive melodramas. Criterion has done justice to the film by not only improving on the audio and visual quality of the previous DVD, but carrying over all the legacy special features as well (the 1935 version also sports a brand new HD transfer as well). Highly recommended. 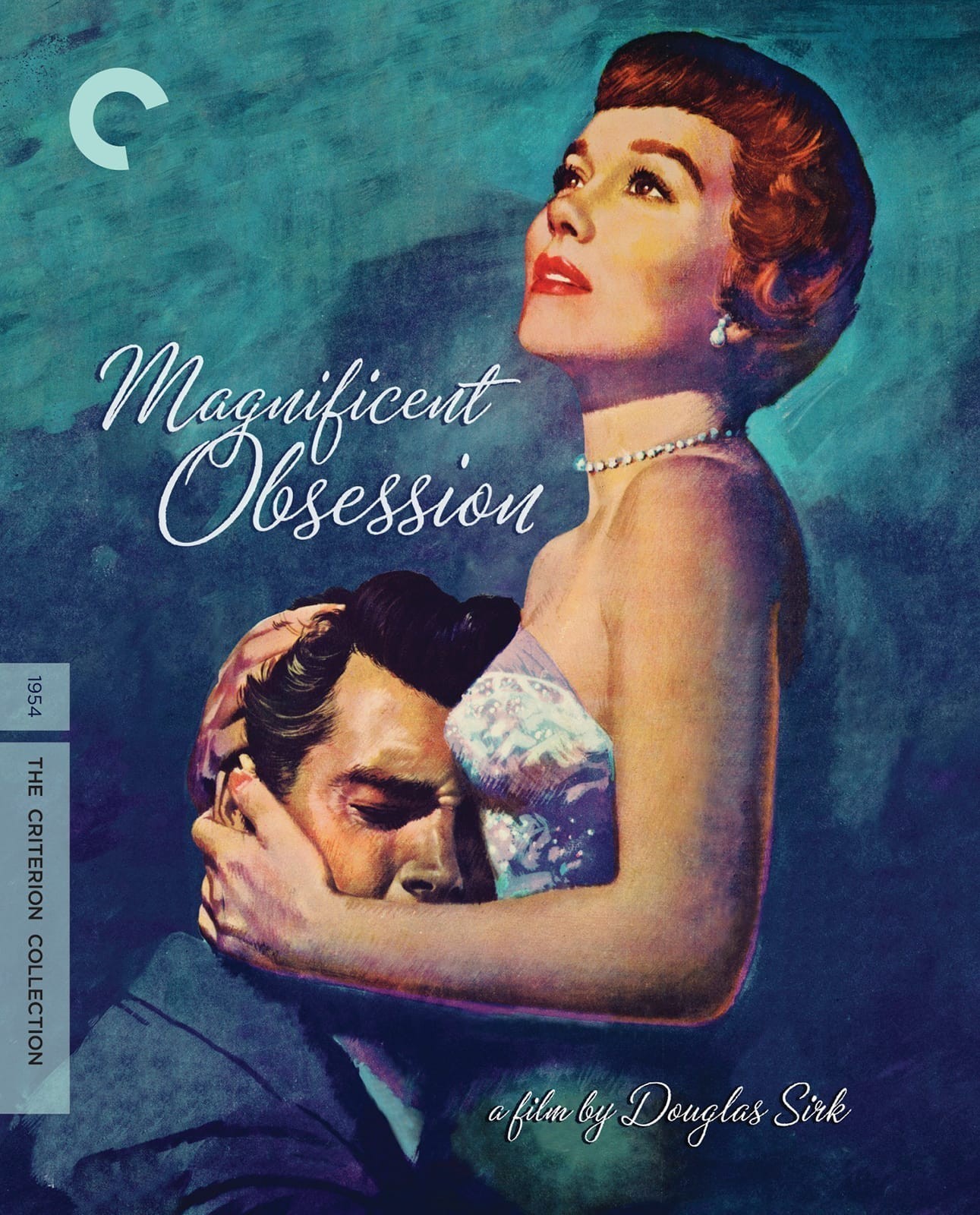