Classic melodrama gets its most lavish film treatment 3.5 Stars

Alexandre Bisson’s warhorse melodrama of a doomed life and mother love triumphant gets its seventh screen interpretation in David Lowell Rich’s 1966 version of Madame X. Produced by Ross Hunter in the most resplendent production the time-worn story had ever known, the film goes through its predictable paces longing to claim the same breathless audiences that celebrated Hunter’s previous lush big screen remakes of Imitation of Life and Back Street.

Alexandre Bisson’s warhorse melodrama of a doomed life and mother love triumphant gets its seventh screen interpretation in David Lowell Rich’s 1966 version of Madame X. Produced by Ross Hunter in the most resplendent production the time-worn story had ever known, the film goes through its predictable paces longing to claim the same breathless audiences that celebrated Hunter’s previous lush big screen remakes of Imitation of Life and Back Street. It certainly offers Lana Turner the most complex and demanding role in her long screen career, and she manages to make much of it palatable despite being too old in the early going and a bit too maudlin later on for the character to earn utmost sympathy for the doom she brings upon herself.

Young newlyweds Clay Anderson (John Forsythe) and wife Holly (Lana Turner) begin their married life living with Clay’s imperious mother (Constance Bennett) in a sprawling mansion in suburban Connecticut. He’s a diplomat often gone for long periods of time away from home while Holly copes with their newborn son. Clay, Jr. (Teddy Quinn as a boy, Keir Dullea as a man). But she eventually gets bored alone every night and begins going out on the town with playboy bachelor Phil Benton (Ricardo Montalban). After six weeks of a whirlwind romance, Benton falls in love and proposes they run away together. Holly, horrified at anything that would take her away from her son, pushes him away causing him to fall down a high flight of stairs to his death. Hoping to preclude a scandal that might ruin Clay’s future political ambitions, Mrs. Anderson offers to cover up Holly’s part of the accident on the condition she leave the lives of her husband and son forever. Holly reluctantly agrees to spare them the possible scandal and drifts around for the next twenty years sinking further and further into alcoholic despair, but little could she imagine that she would one day re-enter the lives of her lost husband and son in the most dramatic way possible.

Jean Holloway has taken the basic skeleton of the story from the original 1906 play but has made some notable changes to update the story to America and to the post-World War II era. One thing that hasn’t changed is that the female lead is still the author of her own misery and not really worthy of pity, choosing an exciting nightlife instead of developing hobbies and interests to keep her occupied during her husband’s long absences. She also tosses away a second chance at happiness with a Danish concert pianist (John Van Dreelen) which also lessens audience sympathy toward her, continually making “noble” choices which are, in effect, rather stupid and self-defeating. And the biggest question which is never addressed is why she didn’t simply return to being a working girl (she had been a department store clerk before her marriage) instead of sinking into prostitution (another kind of working girl?) and absinthe addiction. Director David Lowell Rich doesn’t stint on showing us the lavish lifestyle of Holly’s early married years (swathed in luxurious gowns, furs, and jewels) amid the splendors of the privileged Connecticut society set (the enormous sets with hundreds of expensively dressed extras is simply mind boggling) so that her later experiences provide a horrific contrast with the squalor of the dingy Mexican hovel which she calls home. There are montages to cover the good times and bad, and the climactic courtroom sequences, while certainly lacking in realistic legal procedure, do manage the primary aim of the film: to wring tears from the eyes of viewers who manage to get to the heartrending encounters between the desperate Madame X and her grown-up son who doesn’t know he’s defending his own mother on trial for murder.

Lana Turner’s performance was famously disparaged by critic Pauline Kael who referred to it as “Brand X” acting, but she’s clearly in the minority: despite being too old for the earliest sequences in the movie, the actress, always known for her glamor and who certainly manages a huge number of Jean Louis costume changes when the times are good, has no qualms in navigating the more sordid passages of the story deglamorizing herself to excellent effect and managing to act the grunge as well as wear it. While her constant weeping over the film’s final seventy minutes may not sit well with all audiences, it’s necessary for the part to work, and it certainly does in its own quaintly old-fashioned way. John Forsythe is stalwart and honest as the older Clay, and Keir Dullea’s sensitive handling of the son’s ignorance about the identity of Madame X earns those viewer tears that the mother-son scenes together always elicit. While it’s great to see Constance Bennett again as Estelle Anderson, the script doesn’t play fair with her character making her seem ever-supportive of her son’s choice of a wife early-on and then turning on Holly in the blink of an eye when a mistake is made. Possibly a scene or two showing her true feelings away from son and daughter-in-law might have helped make her transition from acceptance to aggression seem less abrupt. John Van Dreelen is earnest and appealing as the pianist who helps Holly and wants them to be together while Burgess Meredith makes the most of his scenes as the con-man out to exploit Holly for her blackmailing potential against the Andersons.

The film’s original theatrical aspect ratio of 1.85:1 is faithfully rendered in this 1080p transfer using the AVC codec. Sharpness is usually superb except when soft focus filters are used for glamor effects and in one shot which, unlike the rest of the movie, offers a milky contrast and poor black levels. Color is rich and solid with realistic skin tones. Shadow detail is generally very good though occasionally details do get lost in the deepest shadows.  There is one big blip of damage to the image, but otherwise the transfer is clean. The movie has been divided into 9 chapters.

The PCM 2.0 mono sound mix is certainly era-appropriate. Dialogue has been well recorded (with occasional looping only slightly noticeable), and Frank Skinner’s lush, heart-piercing score and the atmospheric effects never compromise the other aspects with which they are mixed. Any age-related problems with hiss or crackle have been completely eliminated.

Fifteen-Page Booklet: contains a cast and crew list, some appealing black and white and color stills from the movie, and a detailed piece on the career of Lana Turner penned by Russell Cowe.

While fans in Region A will need a region free player to enjoy this release, those who are duly equipped will relish this fine high definition transfer of David Lowell Rich’s Madame X. The release also offers a few bonus materials and a most welcome enclosed booklet and reversible cover art to supplement the package. The disc can be purchased directly from Panamint at www.panamint.co.uk

I agree there are some implausible aspects to the story, but the only one that irks me is that "Madame X" seemingly has not learned the name of her courtroom defender. If she had, she would have realised from the outset who he was.

As for that visual blip: I must have blinked. I'm pleased with the transfer and am very glad to have this disc. I'm also impressed by Russell Cowe's summary of the life and career of Lana Turner.

All zone-free Lana Turner fans should add this disc to their collection.

I ordered today. The story was always implausible and by the sixties I am sure it was hopelessly dated, but I love the old weepers as they sometimes refer to them on TCM and this one is classic.

I, too, have ordered this one through Amazon Australia. Amazon UK would not allow orders to the U.S.

Perhaps Universal will one day see the light and start issuing some of these classics.

My copy arrived yesterday, and I will watch it this evening or tomorrow. Am very much looking forward to it.

Virgoan said:
My copy arrived yesterday, and I will watch it this evening or tomorrow. Am very much looking forward to it.
Click to expand...

I hope you'll let us know what you think of it.

One of Lana's finest; certainly one of the rare times that she was called upon to stretch her acting muscles. I love Lana in this period, alongside "Madame X" she is also in peak form in the underrated "Portrait in Black".
Expand signature
"When I get a little money, I buy movies. If there is some left over I'll attend to utilities and groceries". 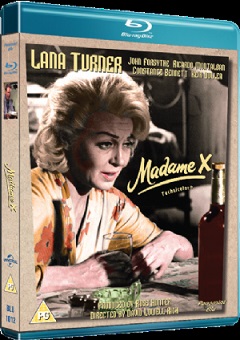