Forum List What's new Dark Style Change width
Log in Register
What's new Search
Menu
Log in
Register
Navigation
Install the app
More options
Dark Style
Close Menu
Posted on November 18, 2020 by Sam Posten
You are using an out of date browser. It may not display this or other websites correctly.
You should upgrade or use an alternative browser. 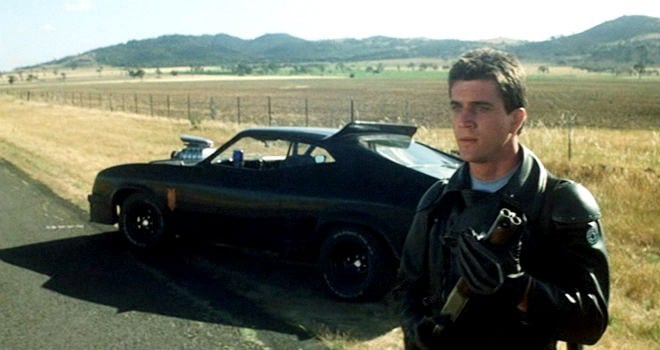 Max Rockatansky (Mel Gibson, in only his second credit) is a veteran police officer in the Main Force Patrol (MFP), one of the last vestiges of law and order in a near future world that is in steep decline. Filmed in the Australian outback and coastal Melbourne, the desolate landscapes could be anywhere in a world turned to desert. Max and his fellow MFPs are mostly concerned with stopping the loonies from racing across Highway 29 in suicidal death trap vehicles, and they use high octane pursuit cars to get the job done. One local gang of punk knucklehead bikers is lead by Toecutter (Hugh Keays-Byrne, who played Immortant Joe in Mad Max: Fury Road). When Toecutter attacks Max’s family and burns Max’s best friend alive, Max joins the world in going crazy.
Max becomes vengeance incarnate and settles the score with the biker gang, one by one. 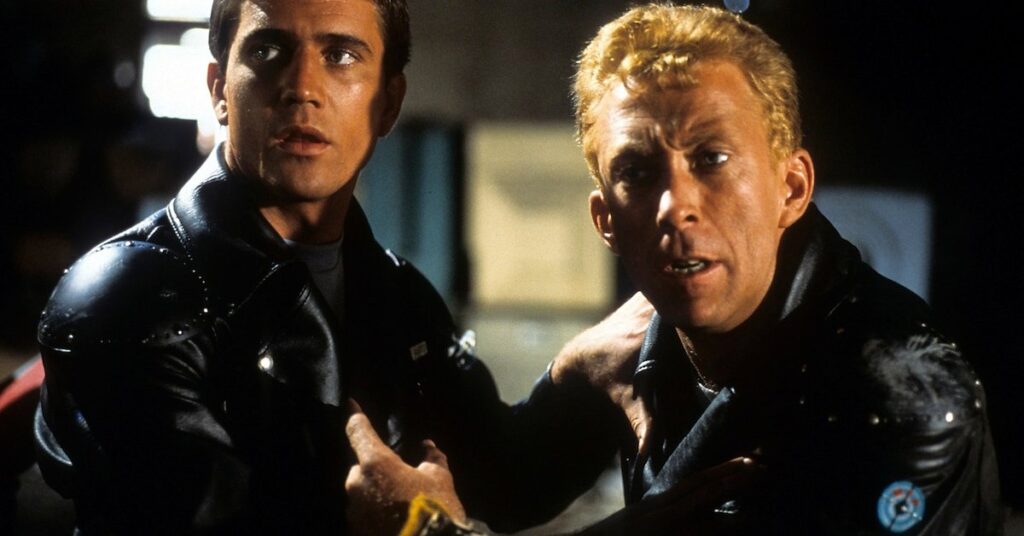 I came into the Mad Max franchise at “Beyond Thunderdome” and am unsure if I ever saw either of the two prior movies in the series (Mad Max and The Road Warrior, titled Mad Max 2 outside the US) before now. I guess I had always assumed Max was the broken and deranged character we see find some modicum of redemption in Thunderdome. But that’s not true, this original shows a Max before his breakdown: young, in love and still a believer in bringing bad guys to some form of justice that doesn’t require vigilantism. And I was not aware either of the original’s influence on and introduction of the post-apocalyptic genre that has spawned countless demented visions since its release.

BT cemented Gibson for me as an actor worth following. And, like many fans, I have been saddened by his falling into anti-Semitism and other bigotry. My own personal line is to separate the art from the artists where possible, especially if the artist was a part of an ensemble effort and not the creator, and also especially if the work was created before the artist’s issues became so public. So I have no issue with reviewing something like Mad Max and evaluating it on its merits where I also refuse to go see current films starring Gibson. If you have a different line you draw on these issues I’ll respect that too.

The bottom line is that Mad Max is a work of genius that spilled out of director George Miller’s head as a result of working road trauma cases as an actual doctor, and its influence on similar films in the genre is immeasurable. It’s a rare film that is better because of the budget limitations that were imposed on it and its very existence is somewhat of a miracle. It thrust Gibson into the world as a bona fide star and created industries full of similar but different apocalyptic visions.

The thing about Mad Max is that until Max’s fall he isn’t even one of the most interesting characters. Goose (Steve Bisley, who was Gibson’s best friend and the reason why Gibson even auditioned) has as much charisma and more swagger than Gibson does for 3/4 of the film. The vaguely erotic relationships and the violence the gang members wreak is still eye opening, even 40 years later. The cars are stars in their own right, from the yellow interceptors to Max’s v8. And Toecutter’s command of his minions is every bit as strange and fascinating as Alex has over the Droogs in A Clockwork Orange.

From the cinematic inspiration of car mounted cameras and low to the road cinematography to the fake leather that the cops wear there are dozens of reasons why Mad Max was so influential. That Gibson got so much of the attention for so long should not be a surprise, but if you want evidence that the spark there was Miller’s all along, all you have to do is see Fury Road to know that.

Mad Max is presented in 4K video with Dolby Vision and an underlying HDR10 encode. It seems to me that the Wide Color Gamut support is as important as actual HDR lighting here, as specific colors have been calibrated to pop nicely, especially the reds and yellows used for the cars. Detail is seriously crisp for a 1979-era independent film, and it’s clear that serious effort and care have been taken to present this film better than anyone ever saw it in a theater. Because all the carnage was captured strictly in camera, long before the era of CGI, the destruction and mayhem look absolutely fantastic, and the peril of the stunts is more clear than ever. There’s nothing like seeing a rider actually getting hit in the back of the head by his own laid-down motorcycle (in slow motion!) to show just how dangerous some of these shots were.

There is a sheen of grain throughout, as befitting the stock used, but zero issues caused by the conversion. It’s unlikely it will ever look better. 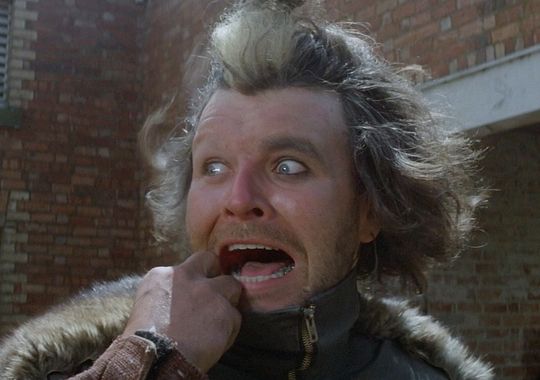 This is a retread of the 5.1 Australian accent version that was included on previous Blu-ray releases. I should note we heard American dubs during the original US release of the film. Other than that it’s unremarkable and unimproved from the original release. There is a LOT of questionable edits in the mix with badly overlaid dialogue munged into the background soundscape. Speaking of the soundtrack, composer Brian May (not the guitarist from Queen)’s selections are interesting and eclectic. Other than that don’t go in expecting a dramatic upgrade the way the video is restored and presented.

DISC 2: BD50 Blu-ray
-Road Rage: NEW Interview with Director George Miller (This was done over video conferencing. The PQ is trash but he tells a good number of interesting snippets) 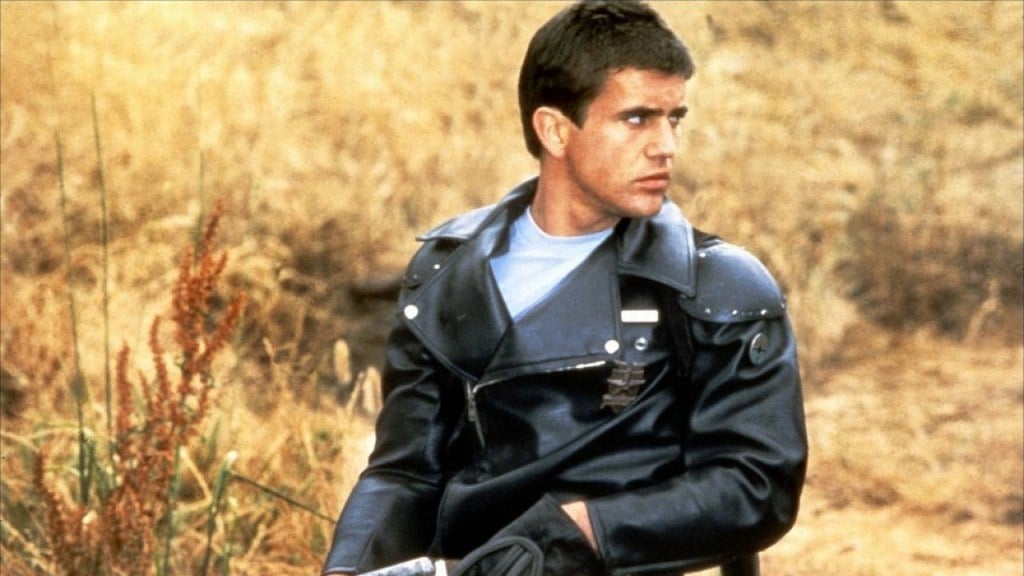 Regardless of how you feel about the Mel Gibson of today, there is no denying his charm and charisma in this film, and no denying the influence both he and the film have had on post apocalyptic story telling.

Overall I wish more attention had been paid to the sound side of things when the film -looks- this good. Despite being ‘simply’ a science fiction adventure story Mad Max is an important contributor to the history of film, and certainly of Australian Cinema. It is responsible for catapulting the career of one of movie’s biggest successes and put Australia on the map for modern film making. If that’s not deserving of an Atmos restoration I don’t know what is.

Minions: The Rise of Gru Digital

I Know What You Did Last Summer (25th Anniversary) [4K UHD]

Excellent - thanks for the review. I'm a fan of this and will be ordering it.

I think I might hold out for a new version. If the audio is that lacking, maybe enough complaints will spur a new edition down the road...pun intended.

I watched this theatrically on release, and that will do for me.
You must log in or register to reply here.