A popcorn movie of pure entertainment produced impressively in 3D, that’s John Brahm’s The Mad Magician. There are some apparent similarities to the previous year’s 3D blockbuster House of Wax including its producer, writer, and star, but apart from that, The Mad Magician crafts its own depiction of a good man who through outside forces loses his sanity and begins to kill. If The Mad Magician lacks the eeriness and shocks of the earlier picture, it earns its own credit for its outstanding 3D effects, some excellent performances, and, of course, offering Vincent Price yet another opportunity to play a sympathetic villain.

Don Gallico (Vincent Price) has made a comfortable living designing illusions for many master magicians, but he longs to break out on his own as a stage magician. On the brink of becoming Gallico the Great, he’s stopped by his employer Ross Ormond (Donald Randolph) who reminds him that his contract stipulates all of his illusions belong to him and not to Gallico himself. Having already lost his wife Claire (Eva Gabor) to Ormond, he refuses to lose his career to him, too, and kills him using his new buzz saw illusion. Afterward, Gallico proceeds to cover his tracks using a series of masterful make-up illusions he’s perfected so that even Lieutenant Bruce (Patrick O’Neal), fiancé of Gallico’s lovely assistant Karen (Mary Murphy), is baffled. But Bruce has begun using a new method of tracking criminals known as fingerprinting, and he’s certain he’s going to be able to trace the killer by his prints.

The story and screenplay by Crane Wilbur borrows the basic tenets from his House of Wax of a good man driven to madness by selfish, grasping outsiders but rather than using wax to conceal his victims, our central character here has a more elaborate scenario for killing and disposing of the bodies while maintaining their living identities long enough to throw off witnesses and the police. Director John Brahm sets up his shots very interestingly for 3D (apart from the traditional motif of hurling objects at the camera), but it’s surprising how careless he is in allowing certain errors to make their ways into the finished film. Among those mistakes are a mirrored table bottom that people’s legs pass behind thus giving away that a reflection is being used, a spirit-gummed mustache that comes undone from one side of actor Donald Randolph’s face at his introduction which flutters a bit when he turns in certain shots, and a door supposedly closed and locked which swings partly open again near the end. The murders are bloodless, of course, and are handled either out of camera range or offstage due to the Production Code, but the magician’s illusion boxes used for these crimes are unusual and give the movie much of its uniqueness. Of course, suspension of disbelief is necessary since Vincent Price is quite a bit taller than two of the people he later masquerades as, but, given that necessity, the murder methods and disposal techniques used here are crafty and rather delicious.

It’s another great opportunity for Vincent Price to play both a hero and villain, a good man driven insane by greedy rivals and poseurs, and one roots for him despite his murderous tendencies. Patrick O’Neal makes a strong movie debut as the detective who thinks outside the box and shows up his higher-ups. John Emery gets to ham up a storm as rival magician The Great Rinaldi making his every appearance one to be savored. Mary Murphy is a lovely magician’s assistant, and Eva Gabor brings lots of glamor and magnetism as the frivolous wife who tossed aside her loving husband for the lure of money and the finer things she covets. Lenita Lane (wife of screenwriter Crane Wilbur) brings forth comedy relief as the snooping landlady/mystery writer who figures things out all too conveniently, and the wonderful Jay Novello supports her as a typical henpecked husband. Donald Randolph is the film’s weak link as the greedy magic shop owner who refuses to end his contract with Gallico and give him his freedom. His line readings are stiff and a bit colorless compared to the lively set of actors who surround him.

The film’s theatrical aspect ratio of 1.85:1 is faithfully reproduced in a 1080p transfer using the MVC (3D)/AVC (2D) codec. This is an exceptional transfer with the grain structure completely intact and sharpness outstanding. The grayscale offers nice black levels and crisp whites. Contrast occasionally gets a little inconsistent (perhaps due to opticals between shots), but overall the picture is superb. The movie has been divided into 24 chapters.

3D is sensational for this title. Yes, some of the 3D effects from House of Wax are mimicked here: yo-yos instead of a paddle ball shot out at the audience, sprays of water and flames, an arm that extends toward the audience, but the best thing about the 3D here is in the very interesting compositions that make full use of the medium. A desk extends outward unobtrusively in a lingering shot, and there are always lots of varying objects and people on different planes in the same set-ups which extends the depth and width of the image (the latter greatly enhanced by the widescreen transfer offered here).

The DTS-HD Master Audio 2.0 mono sound mix is very typical of its era. The track has been cleaned up wonderfully with no problematic hiss, crackle, or flutter to distract, but the fidelity is nothing that will wow you with very little on the low end. The Arthur Lange-Emil Newman background score does its job and never obstructs the nicely recorded dialogue or the atmospheric effects which have been used.

Audio Commentary: film historians David Del Valle and Steven Peros contribute another very chatty and informative discussion that goes all over the place but still manages to cover all the basics of the movie and a whole lot more.

Master of Fright!: Conjuring The Mad Magician (19:49, HD): film historians Courtney Joyner, Ted Newsom, Michael Schlesinger, and make-up expert John Goodwin discuss the writer, producer, and director, talk about the film’s star, and give an analysis of the movie.

Pardon My Backfire (15:56, 3D/2D HD): both this and the next Three Stooges short are offered in widescreen and both 3D and 2D depending on your equipment and preference.

Six-Page Booklet: offers some black and white stills, original poster art on the back cover, and film historian Julie Kirgo’s informative and brightly written essay on the movie.

It’s impossible to imagine 3D aficionados not going bananas for The Mad Magician with its fun revenge narrative and excellent performances enhanced by the widescreen, 3D, and Three Stooges shorts offered on this wonderful, highly recommended disc. There are only 3,000 copies of this Blu-ray available. Those interested in purchasing it should go to either www.twilighttimemovies.com or www.screenarchives.com to see if product is still in stock. Information about the movie can also be found via Facebook at www.facebook.com/twilighttimemovies. 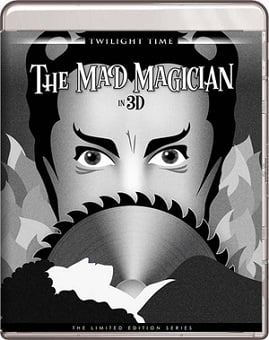