At the start of the 1970’s, Hammer Films had basically cornered the horror market in the UK, giving the world many atmospheric horrors and thrillers. Due to the relaxing of British censorship standards, a pair of producers decided to take advantage and push the envelope a little further in terms of what can be shown on the screen; thus came to being the Karnstein Trilogy of horror films for Hammer – Lust for a Vampire being the middle installment. Previously released on DVD by Anchor Bay, Shout Factory – through the Scream Factory label – has licensed the film from Studio Canal for its Blu-ray debut.

In the southeastern part of Austria lies an exclusive boarding school for girls that attracts students from all over Europe. This school has not only attracted a new teacher in Richard Lestrange (Michael Johnson), but also a beautiful new student in Mircalla Herritzen (Yutte Stensgaard). However, as a number of students and people from the nearby village start mysteriously dying, it soon becomes clear that the Karnsteins may be responsible for the bloodlust and that Mircalla may just be Carmilla reincarnated!

As the middle installment of the Karnstein Trilogy, Lust for a Vampire does continue the pattern of using Sheridan Le Fanu’s Carmilla as inspiration for the material (the preceding The Vampire Lovers and the succeeding Twins of Evil also following suit as well). As such, themes like lesbianism (or in the case of this film, bisexualism) are given a little more exploration in comparison to the vampire films that came before it. However, the film’s real flaw lies in the execution of Tudor Gates’ literal script; Jimmy Sangster was a well regarded scribe in the horror genre and one of the main architects in Hammer’s House of Horror, but is only adequate in terms of direction – meaning he doesn’t do much wrong, but doesn’t really do much to establish himself apart from the others either. Interestingly enough, Terence Fisher was originally going to direct with Peter Cushing in the lead; unfortunately, circumstances prevented both from taking on the project, leaving fans to wonder what might have been. As it stands though, Lust for a Vampire still has enough of the qualities of a Hammer Horror film that makes it worth checking out for curiosity’s sake, even though it falls short of the heights it aspires to.

Groomed as a successor to both Peter Cushing and Christopher Lee, top billed Ralph Bates makes the most of his brief role as the strange teacher who takes a unusual interest in the girls, particularly Mircalla. Former au pair Yutte Stensgaard probably has the best role of her brief movie career as Mircalla, the reincarnated version of Carmilla; Barbara Jefford and DJ Mike Raven cast notable impressions as the Countess and Count Karnstein, respectively (Raven’s voice is dubbed by an uncredited Valentine Dyall). Michael Johnson is OK as the author who becomes a teacher in the boarding school; Suzanna Leigh brings some the Hammer Glamour as Janet, a prospective love interest for Richard. Other notable appearances include Helen Christie as the headmistress of the boarding school, Michael Brennan as the superstitious landlord of the village inn, Pippa Steel and Judy Matheson as a couple of school girls who fall under Mircalla’s spell, and Kirsten Lindholm as a peasant girl who serves as the sacrifice for the Karnsteins to revive Carmilla at the beginning of the film.

Presented in both the original 1:85:1 aspect ratio and an alternate 1:66:1 open matte aspect ratio, this HD transfer was taken from a 4K scan of the original film elements. Film grain is strong and organic with fine details as well as the color palette rendered faithfully; while some scenes are softer than others due to the optical effects deployed, there’s really minimal instances of scratches, dirt, dust or other issues related to the condition of the film elements used here. Overall, this is an improvement over the old Anchor Bay DVD and likely the best the film will ever look on home video.

The film’s original mono soundtrack is presented on a DTS-HD Master Audio track for this release. Dialogue is strong and clear with great fidelity and direction given to Harry Robertson’s score (credited here as Harry Robinson) as well as the sound effects mix. Instances of crackling, popping, hissing, or distortion are hardly present here, which makes this – probably – the best the movie will ever sound on home video.

Commentary by author Bruce G. Hallenbeck – Newly recorded for this release, the author talks about the movie as well as some of its attributes in addition to some of its shortcomings.

Commentary by director Jimmy Sangster, actress Suzanna Leigh, and Hammer historian Marcus Hearn – Carried over from the previous Anchor Bay DVD, the famed Hammer screenwriter/director and actress – in addition to the official Hammer historian – share some of the memories they had of the project.

Just One of the (School) Girls: An Interview with actress Melinda Churcher (3:35) – This brief new interview has the actress sharing some of her fond memories of working on the film.

Still Galleries – There are two still galleries here: one containing production and behind the scenes stills (103) (9:49) and the other containing poster art and lobby cards (51) (4:56); some of the stills were provided by Brett Cameron and Mirek Lipinski.

With a mixture of traditional Gothic elements as well as the introduction of some more overt graphic violence and sexuality, Lust for a Vampire stands out as an example of Hammer trying to modernize while holding true to the style that helped make them famous. Shout has done a great job in bringing the film to Blu-ray with a solid HD transfer offered in two different aspect ratios and a decent offering of special features both new and old. Recommended for fans of Hammer Horror. 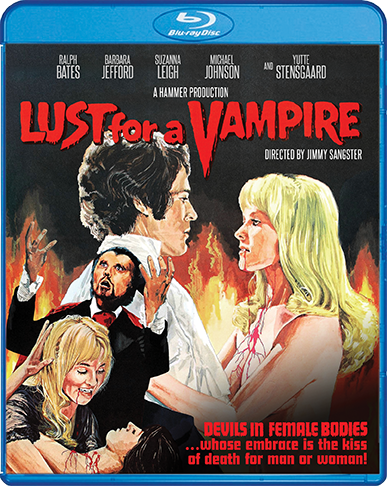