A key moment in constitutional law gets an effectively understated treatment. 4 Stars

For such discriminatory miscegenation laws which had been on the books for centuries to be struck down by a historical Supreme Court ruling, Jeff Nichols’ Loving which deals with the case never goes for the big fanfares or explosive cinematic treatment one might think such landmark legal precedents might generate.

For such discriminatory miscegenation laws which had been on the books for centuries to be struck down by a historical Supreme Court ruling, Jeff Nichols’ Loving which deals with the case never goes for the big fanfares or explosive cinematic treatment one might think such landmark legal precedents might generate. Rather like the mixed race couple at the center of the controversy, the film is low key, understated, and meticulously mounted with lovely, heartfelt payoffs which are worth the wait.

Growing up together in Central Point, Virginia, a blue collar community where the races live and work side-by-side, Richard Loving (Joel Edgerton) gets his African-American girl friend Mildred (Ruth Megga) pregnant and they marry in Washington, D.C. since marriage between different races is illegal in Virginia. Before long, Sheriff Brooks (Martin Csokas) comes calling to arrest the couple for miscegenation. Slapped with a suspended sentence of one year with twenty-five years exile from Virginia as a parole condition, the couple moves to D.C. where Mildred gives birth to three children over the course of several years before she finally decides she wants her kids to have fields to romp in and the Virginia countryside for a home. Mildred writes a letter to Attorney General Robert F. Kennedy to see if he can help, and he passes her letter on to the ACLU where inexperienced but ambitious lawyer Bernard Cohen (Nick Kroll) is eager to move their case through various local and state courts hoping to get it before the Supreme Court.

Writer-director Jeff Nichols has resisted almost completely the melodramatic tract in telling the story of the Lovings, so there are no overly racist, snarling rednecks burning crosses on lawns, the use of the N-word is very sparse, and the various officials, attorneys, and Judge Bazile (David Jensen) who deal in the early going with the case are presented as conscientious professionals carrying out the law with only sporadic editorial opinion offered to the couple (Sheriff Brooks quotes some scripture which he feels justifies the miscegenation statute). The Lovings, too, are simple, hard-working people, not prone to articulate their sense of outrage or frustration at a law they consider unfair and never ones prone to soapbox diatribes. Director Nichols carries off two nicely counterpoint sequences: in the first, Richard at his construction job narrowly misses injury while his son back home is hit by a car while playing stickball in the street (the incident which spurs Mildred to roll the dice and move back home knowing they’re breaking their parole agreement and could be imprisoned for years). Later, Nichols runs the lawyers’ climactic appearance before the Supreme Court (which the Lovings did not attend) with the family back home doing their usual household chores when a phone call delivers the news of the verdict to them. For some, such a monumental moment might have been signaled on-screen by brass bands and an explosive sense of joy, but like everything else in this low key affair, the moment is a humble and sedate one, consistent with the tone the movie has carried from the beginning and which all of the performances have reflected.

Joel Edgerton and Ruth Negga are completely convincing as the Lovings: he a stalwart man of few words and she a shy but strong woman with internalized grit and determination (in some ways reminiscent of Cicely Tyson’s role and performance in Sounder). Clearly devoted to one another without beating the audience’s heads with their affection, this depiction of a loving marriage is rare in movies especially those made in the 21st century. Terri Abney is wonderful as Mildred’s devoted sister Garnet, and Alano Miller is just as effective as her brother and Richard’s best friend. Sharon Blackwood has some excellent moments as Richard’s plain-spoken mother Lola, and Martin Csokas is skillful and officious as the serious-minded Sheriff Brooks. The two lawyers who appear before the Supreme Court are played by Nick Kroll and Jon Bass, both adequate but not revelatory although so little of their arguments are shown that it almost doesn’t matter. Their facial expressions and body language say it all. Michael Shannon makes a brief cameo appearance as the Life magazine photographer Grey Villet who captured Richard and Mildred at home for millions of readers to see for themselves.

The theatrical aspect ratio of 2.40:1 is faithfully rendered in this excellent 1080p transfer using the AVC codec. Sharpness is always exceptional with lots of details to be seen, especially in facial features and hair textures in close-up. Color is nicely balanced, too, with skin tones especially realistic. If black levels don’t always reach the optimal depths, they are plenty deep and impressive. Contrast has been consistently applied for a first-rate image. The movie has been divided into 20 chapters.

The DTS-HD Master Audio 5.1 sound design uses David Wingo’s background score as its most frequent surround channel device. Dialogue has been well recorded and has been placed in the center channel. Ambient effects do get treatment in the fronts and rears but are, like the film, rather low key.

A Loving Ensemble (4:07, HD): director Jeff Nichols discusses the casting process for the central roles assisted by the string of producers previously named.

Loving V. Virginia (4:26, HD): director Jeff Nichols and producer Ged Doherty tell the story of the 1967 court case which has been used as a precedent in subsequent court matters involving the right to marry.

Virginia: a Loving Backdrop (3:09, HD): discussion of the Virginia locations used for filming.

Highly recommended! The monumental court case that struck down restrictions against inter-racial marriage has its story told in an engrossingly surprising low key way in Loving. Outstanding video and audio quality makes this Blu-ray release a real winner.

This sounds like a film all to see,and have a talk about
after.
Expand signature
Former projectionist @ all downtown theatres in Balto. City.Which are all closed. I closed the Tower theatre as the head projectionist, I closed the Mayfair as mgr.
You must log in or register to reply here.
Share:
Facebook Twitter Reddit Pinterest Tumblr WhatsApp Email Link 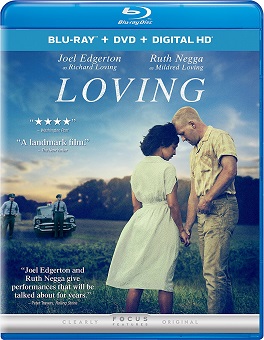