In the spring of 2016, CBS once again presented two newly colorized episodes of its legendary sitcom I Love Lucy under the banner Superstar Special #2. These colorized episodes of one of the all-time great comedy series have always been ratings winners for the network, and this latest edition was no exception.

In the spring of 2016, CBS once again presented two newly colorized episodes of its legendary sitcom I Love Lucy under the banner Superstar Special #2. These colorized episodes of one of the all-time great comedy series have always been ratings winners for the network, and this latest edition was no exception winning its time slot and adding two more episodes to the growing list of available installments of the show now in color.

The two episodes chosen this time were back-to-back episodes from season five while the Ricardos (Lucille Ball, Desi Arnaz) and the Mertzes (Vivian Vance, William Frawley) were enjoying their most popular story arc from their nine seasons on the air: their trip to Hollywood which began midway through season four and extended into the first quarter of the fifth season. These are the third and fourth of the Hollywood episodes now in color (the others include the initial segment “L.A. at Last” and most recently “Lucy Gets in Pictures” which was attached to this year’s annual broadcast of the Christmas episode), and they both revolve around the biggest guest star in the show’s history – John Wayne (who was the number one box-office attraction for 1954 partly due to his smash hit The High and the Mighty which launches one of the memorable jokes in the second episode presented here).

“Lucy Visits Grauman’s” revolves around the wacky redhead’s preoccupation with Hollywood souvenirs. When visiting the forecourt of the famous theater, she and Ethel notice that the block of cement holding John Wayne’s boot prints is loose, and it doesn’t take a genius to know that Lucy would think this the best bit of memorabilia she could bring back to New York. Naturally, the two dizzy friends manage to steal the cement block but not without several mishaps, true to the hilarious slapstick antics the series was known for and which its star, the inimitable Miss Ball, was a master of. When the cement block inevitably gets destroyed, it must be replaced which leads to the second episode “Lucy and John Wayne” as the replacement for the original block is continually ruined in innumerable funny ways necessitating the weary movie star to have to accommodate the desperate redhead who’s trying to keep her husband’s name out of the newspapers to avoid negative publicity for the upcoming release of his MGM film Don Juan. While John Wayne proves a good sport in the second episode, he sometimes pushes a bit too hard for laughs by shouting his lines, but he’s good at reactions to the daffiness of Lucy’s behavior and to Fred’s attempts to display his inner macho and gets quite a few good plugs in for his latest film Blood Alley.

Colorization has come a long way from the crude early attempts that Ted Turner foisted on the public with half-colored dud versions of classics like 42nd Street, It’s a Wonderful Life, and Miracle on 34th Street. Here the colorizers have gone to the trouble of coloring eyes and tongues and hair (though Lucy’s brassy henna-colored locks sometimes seem more popsicle orange rather than the deep, rich henna from her movie days), but the various wardrobe pieces by Oscar-winner Edward Stevenson colorize quite glamorously in these episodes and demonstrate the star’s interest in stylish and form fitting clothes. For the younger generation, many of whom can’t stand black and white films and television shows, it’s a decent attempt to introduce them to the classic comedies of their fathers and grandfathers. And, of course, the black and white versions remain for purists. The disc offers both episodes of the original shows in black and white and colorized and without any trimming for time constraints.

The program’s original 1.33:1 aspect ratio is replicated here, and the show’s grain structure coming from film is also retained without digital manipulation. Because colorization works best with pristine masters, the episodes are spotlessly clean and sharp, and thus the colorized skin tones are appealing and more lifelike than one has any reason to expect. Sharpness and detail are first-rate even if these are standard definition transfers and not the high definition master of the network broadcast. There is only the tiniest trace of aliasing in this presentation. The program has been divided into 7 chapters which correspond to the commercial breaks in the special’s original broadcast.

The disc offers a Dolby Digital 2.0 soundtrack, decoded by Dolby Prologic into the center channel. The mono mix offers era-appropriate blends of dialogue, music, and sound effects without any problems with age-related hiss or crackle on the soundtrack.

The disc offers the original 45:15 broadcast of the special with the two edited episodes paired together and commercial breaks (without the commercials) along with the two individual complete episodes in both black and white and color.

Though the I Love Lucy Superstar Special #2 was broadcast in high definition which is naturally missing on this standard definition DVD, the quality of the comedy is what’s foremost of importance, and this disc serves as a fine memento for those who want to relive this spring special on disc with two more colorized episodes of one of TV’s true classics in a growing library of color Lucy episodes. Recommended!

As with the previous releases in this series, I would be 100% interested if these were released on Blu-ray, but have no interest in standard-def DVD purchases of this programming.
Reactions: PMF

Josh Steinberg said:
As with the previous releases in this series, I would be 100% interested if these were released on Blu-ray, but have no interest in standard-def DVD purchases of this programming.
Click to expand...

I am sincerely hoping that once they get what they consider enough colorized episodes, CBS will issue a Blu-ray of them in a set.
Reactions: Josh Steinberg

Matt Hough said:
I am sincerely hoping that once they get what they consider enough colorized episodes, CBS will issue a Blu-ray of them in a set.
Click to expand...

That'd be awesome. I'd love to be able to buy them all in one place, along with the colorized version of the Christmas episode. The B&W releases are my go-to, and I'm content with the complete DVD series (and would have bought a complete BD series if such a product had ever been made), but for the sake of variety I'd be in favor of owning a nice HD copy of these colorized versions. They've been fun to watch whenever CBS has aired them.

Was there any bonus disc released for this? I thought I read somewhere that TARGET would have an exclusive disc with the "Lucy Does A TV Commercial" episode, but according to their mobile app, #2 isn't being sold in stores and there's no mention of a bonus disc. Anyone know?
You must log in or register to reply here. 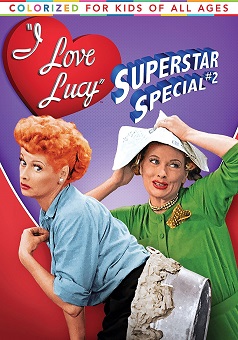