With both legendary stars and its director and writer all winning Emmys for their work, Love Among the Ruins emerges as a classy and endearing entertainment: smart, erudite, and sentimental in the best possible way.

During his 1973 interview with the inimitable Katharine Hepburn, Dick Cavett queried if the actress regretted never having made a movie with Laurence Olivier. “Well, neither of us is dead yet,” she curtly replied, and the amount of irony in that answer couldn’t have been ascertained at the time since less than two years later, the two legends would indeed make a film together, the made-for television offering Love Among the Ruins directed by Hepburn’s great good friend George Cukor. A splendid production offering mature romantic yearning with a spirited courtroom case set in the distant past, Love Among the Ruins is as literate and quietly entertaining today as it was when it premiered in 1975 with the production, if anything, appearing more sophisticated and polished now than it did at the time. (Amazingly, the film received mixed reviews and was not a ratings hit though it inevitably won six Emmys at the end of the season.)

Wealthy widow Jessica Medlicott (Katharine Hepburn) is being sued for breach of promise by young bounder Alfred Pratt (Leigh Lawson) who wants £50,000 of the money she inherited from her late husband. Her solicitor George Druce (Richard Pearson) brings her to renowned barrister Sir Arthur Glanville-Jones (Laurence Olivier) who has in the past won cases that on the surface appeared impossible. But Sir Arthur is guarding a secret: forty years ago, he had spent three blissful days falling in love with Jessica when she was touring with an acting troupe in Canada when he was a law student. Though she doesn’t have the slightest memory of their time together and finds his still-infatuated behavior around her most odd, she agrees to let him represent her in court, a case which has all appearances of being a difficult one to win.

Writer James Costigan had intended his teleplay for Alfred Lunt and Lynn Fontanne, but the acting duo hadn’t worked in almost a decade due to his fading health. Audiences came out the winners in that regard since both Hepburn and Olivier were still at the height of their powers as film performers before their own old-age ailments began to affect their work. Director George Cukor, always wonderful with quality literary properties, milks every bit of gentle comedy and well-earned sentiment from the situation that offers both stars marvelous moments in which to shine. Olivier gets things off to a delightful start with his harried race from court in the rain to fix himself up for his long anticipated rendezvous with his lady love (who had spoiled him for all other women in the ensuing years). Hepburn takes some time to get revved up as his behavior baffles and confounds her, but her best moments come in her actions and reactions during the courtroom proceedings which take up the last half of the film. Cukor handles those courtroom antics with classy restraint and without great flourishes letting the actors providing the fireworks, and that they do: Hepbrun in some brassy physical action and Olivier in his masterful closing argument. The witnesses to the May-December romance between Alfred and Jessica get their amusing moments in the witness box, and Cukor even stages a daydream in the middle of the trial as the smitten barrister remembers his lady love playing Portia in The Merchant of Venice (which allows Hepburn a chance to recite excerpts from two Shakespeare soliloquies in some dazzling Margaret Furse costumes). Hepburn is lovely, but it does bring the proceedings to a screeching halt.

Though she never attempts to adopt an English accent (as indeed, she hadn’t done in her earlier Oscar-winning work in The Lion in Winter), Katharine Hepburn shows grit and pluck as the outraged Jessica Medlicott, and by the end of the film, we find out there has been a method in her madness all along making return visits to her performance a necessity in order to enjoy the subtext of her playing. Laurence Olivier’s range from lovesickness to astonishment at being forgotten isn’t subtextural: it’s front and center throughout the film, and it’s no surprise he handles all of the courtroom scenes with aplomb. Both actors won well-deserved Emmys for their performances, and their work together is easy and flowing. (Olivier later said making this movie was his happiest filmmaking experience.) Richard Pearson doesn’t get a lot of lines as Jessica’s solicitor, but he’s a great listener and plays with the two icons smoothly. Colin Blakely gets a juicy part as Sir Arthur’s courtroom adversary J.F. Devine who needles him by calling him “Granny” and tries in vain to get the upper hand in court. Leigh Lawson scores as the cocky “injured party” in the breach suit, and Joan Sims as his conniving mother is likewise quite effective.

The film has been framed at 1.66:1 and is presented in 1080p resolution using the AVC codec. Soft focus filters used on the actors (primarily Hepburn) tend to obscure some of the details in the close-ups, and you may catch a stray speck or two, but the images are genuinely beautiful with fine color and good contrast. The movie has been divided into 8 chapters.

The DTS-HD Master Audio 2.0 mono mix sounds very much like TV-movies of the era with perhaps a little less bass in the mix than one might be expecting. There are certainly no problems with age-related anomalies like hiss, crackle, pops, and flutter. Dialogue is always easily discernible, and it’s been mixed with John Barry’s delicate score and the infrequent sound effects with surety.

Audio Commentary: film historian Stephen Vagg has done his research which he shares (both factual and gossip) about the film’s before-and-behind-the-camera participants. While it’s certainly worth a listen, he frequently dings the film on what it isn’t instead of praising it for what it is. Fans of the show might not find his criticisms adequately legitimate.

With both legendary stars and its director and writer all winning Emmys for their work, Love Among the Ruins emerges as a classy and endearing entertainment: smart, erudite, and sentimental in the best possible way. 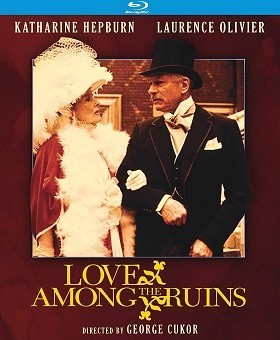