Haunting, gripping Hollywood noir is a must see. 4.5 Stars

A great Nicholas Ray film noir with a great and haunting Humphrey Bogart performance, In a Lonely Place is another Criterion Blu-ray release that joins the ranks of the must-haves.

Humphrey Bogart was such a frequent resident of film noir that it’s somewhat shocking in Nicholas Ray’s offbeat noir In a Lonely Place when the focus shifts halfway through the movie from our concern for Bogie’s character to a more pointed and protective interest in the female lead played by Gloria Grahame. She’s not a femme fatale as in a classic noir but rather someone who could easily become a victim herself, a shift in focus that marks this marvelous film as something indelibly unique and altogether wonderful.

When bubbly hatcheck girl Mildred Atkinson (Martha Stewart) is found battered and dumped on the side of the road in Hollywood, screenwriter Dixon Steele (Humphrey Bogart) who was the last person seen with her is picked up by his old army buddy and now police sergeant Brub Nicolai (Frank Lovejoy) for questioning. Dix had invited the young girl to his apartment to recount the plot of a book he’s been assigned to adapt but wasn’t interested in reading himself, but when he gave her cab fare and sent her on her way, the two were observed by fellow apartment complex dweller Laurel Gray (Gloria Grahame) who serves as Dix’s alibi. As the police investigate other leads, Dix and Laurel begin to see a lot of each other eventually falling in love. But as she gets to know him better, Laurel realizes that Dix has a hair-trigger temper and is capable of real violence and begins to wonder what’s she’s gotten herself into, a situation not lost on police captain Lochner (Carl Benton Reid) who’s positively convinced of Dix’s guilt.

Andrew Solt has adapted the novel by Dorothy B. Hughes, but he’s made numerous changes to the original book including the identity of the murderer and the resolution of the romance between Dix and Laurel. The movie gets it painfully right in all the best ways, complexly creating an intriguing murder mystery scenario and then almost tossing that aside and instead leading us away from caring as much about its solution than in the blossoming of the affair between the ever-volatile Dix and the vulnerable Laurel and how that might turn out. As with Sunset Boulevard, also released the same year as In a Lonely Place, Hollywood doesn’t come off very well in the movie (especially in the opening ten minutes) with lots of vipers lying in wait ready to pounce on someone down on his luck (Dix is one of the few who doesn’t seem to mind associating with people who are out of favor) and ready to celebrate a cad just because of a recent success. But the film’s real brilliance in in its shifting of viewer allegiance from Dix to Laurel midway through the movie. Director Nicholas Ray has crafted Bogart to increase in paranoia and mistrust as the movie runs echoing tragically in his real life a beautiful line of movie dialogue of which he’s quite proud and which turns out to be poignantly prophetic. When Laurel becomes the primary protagonist, we fear for her safety and remain unsure how things will go for her, the director ratcheting up the suspense as the potential for violence against her increases. There is also the quip-filled dialogue throughout that trips pleasingly on the ear as the protagonists and antagonists spar verbally with one another. The ending of the film which may not quite be as shocking and purplishly melodramatic as the one in Sunset Boulevard rings truer and pierces the heart more completely.

Because his production company was responsible for mounting the movie, Humphrey Bogart seemingly has no qualms playing a leading man with some less than admirable qualities, and this is one of his most complex and vigorous performances (in fact, most of Bogart’s films away from Warner Bros. in the 1950s allowed him great opportunities to play complex and sometimes unlikable and deeply troubled men). This is one of Gloria Grahame’s best performances, sweet and tender on the outside but with growing apprehensions that are carefully etched on her face and in her body language as the film plays. Frank Lovejoy as Dix’s former Army buddy and Art Smith as Dix’s current Hollywood agent both offer solid portrayals of faithful friends who refuse to think the worst of someone whom they care about. Carl Benton Reid is all gruff bluster as the detective captain convinced of Dix’s guilt while Robert Warwick as a down-on-his-luck actor allows Dix to show a tender and merciful side to counterbalance the several rough and tumble encounters he has with people throughout the movie who rub him the wrong way.

The film’s original theatrical aspect ratio of 1.33:1 is faithfully reproduced in this 1080p transfer using the AVC codec. It’s a thing of beauty with outstanding sharpness throughout (except for glamor close-ups of the leading lady) and a grayscale that’s continually impressive with its inky black levels and crisp, pure whites. Contrast has been adeptly applied to craft a consistently outstanding image. The movie has been divided into 23 chapters.

The PCM 1.0 sound mix (1.1 Mbps) offers an era-typical mono track where the dialogue, George Antheil’s creative background music, and the atmospheric effects all combine for a singularly expressive audio experience. There is a bit of attenuated crackle noticeable on a couple of occasions, but otherwise, age-related problems with hiss and other artifacts are not a problem.

Audio Commentary: film noir specialist Dana Polan offers an interesting if overly verbose analytical commentary describing in too much repetitive detail every movement, thought, and deed of the principals.

I’m a Stranger Here Myself (40:33, HD): a 1975 documentary on the life and work of director Nicholas Ray with clips from some of his famous films, interviews with John Houseman and Natalie Wood (among others), and scenes showing Ray working with film students at Harper College after he had left Hollywood behind.

Vincent Curcio Interview (16:40, HD): the biographer of Gloria Grahame offers a rundown of her personal and professional life.

‘In a Lonely Place’ Revisited (20:23, HD) Oscar-winning writer-director Curtis Hanson offers his own analysis of the movie from 2002.

Suspense Radio Broadcast (59:56): the 1948 radio adaptation of the original Dorothy B. Hughes novel starring Robert Montgomery and Lurene Tuttle in the leading roles.

A great Nicholas Ray film noir with a great and haunting Humphrey Bogart performance, In a Lonely Place is another Criterion Blu-ray release that joins the ranks of the must-haves. Wonderful bonus material and a first-rate transfer make this release highly recommended!

I'm very happy to see this film being released by Criterion. Sounds like a terrific release. Day one purchase.

Can't wait to see this! I love these noir classics.
T

Just saw IALP for the first time, and it has already become one of my favorite noirs. Excellent storyline set in Hollywood, with Bogart playing an interesting role as a man with anger issues. Also enjoyed the mystery that was the focal point of the film.

Very impressed with Gloria Grahame. Great actress, and she is definitely one of the most attractive women I've ever seen (either in person or in a film/TV show). Stunning & put together - without being overbearing
You must log in or register to reply here. 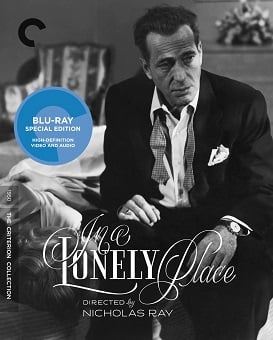