Having recently left us earlier this year, the legendary Kirk Douglas left behind a great legacy in Hollywood. Not only was he a star of such classics like Spartacus (1960), Paths of Glory (1957), The Bad and the Beautiful (1952) and 20,000 Leagues Under the Sea (1954), he was a philanthropist, active in political causes, and was crucial in ending the blacklist in Hollywood (he and director Otto Preminger both hired Dalton Trumbo to pen the scripts for their respective films – Spartacus and Exodus, respectively). However, one film stood out as his personal favorite, the singular western Lonely Are the Brave. Previously released on DVD by Universal, Kino has licensed the film for its Blu-ray debut.

Jack Burns (Kirk Douglas) is one of a dying breed – the independent cowboy who wanders from place to place for work – in an increasingly modernizing world. After arriving in a small New Mexico town with the intent of getting his friend out of jail, he intentionally gets himself arrested only to find that his buddy has no intention of breaking out with only a little bit of time left on his sentence. Now Jack finds himself alone in his bid for freedom, with the Sheriff (Walter Matthau) in pursuit of the cowboy trying to stay free in a changing society…

Lonely Are the Brave is more than just a great actor’s personal favorite film, it’s also a terrific western that still feels relevant and fresh today. Working from a great script by the legendary Dalton Trumbo, director David Miller fashions a brilliant story showing how one man’s individual streak appears to be more and more at odds with the modern world; it’s a trait the Sam Peckinpah would later explore in a more stylish (and very bloody) scale in films like The Wild Bunch (1969), Pat Garrett & Billy the Kid (1973) and Bring Me the Head of Alfredo Garcia (1974). The movie also makes great use of black and white as well as widescreen, giving the New Mexico locations feel both expansive and confining at the same time (no small feat); the talents of cinematographer Philip Lathrop and a young up and coming composer named Jerry Goldsmith are also served well here, further underscoring this more intimate story of the West than previous movies in the genre. The only real problem (and complaint) here is that Universal mishandled the movie upon initial release and it never really got the attention and acclaim it deserved; nevertheless, Lonely Are the Brave has survived over the years as a cult favorite and today, can finally be seen for what it is: one of the best westerns of the 1960’s and – quite possibly – one of the best in the genre as a whole.

As it was mentioned earlier in this review, Kirk Douglas considered this movie his personal favorite out of all the films he made; his portrayal of Jack Burns deserves to be considered amongst his best on-screen performances. Portraying the sheriff who has some sympathies to the fugitive Burns, Walter Matthau has one of his best early performances; it’s a nice change of pace compared to some of his more villainous portrayals, like his debut performance as a whip wielding heavy in Burt Lancaster’s The Kentuckian (1955). In one of her earliest film performances, Gena Rowlands casts a memorable impression as the wife of Jack’s best friend; she would go on to be the muse of her actor/director husband John Cassavetes in his films and has earned an Honorary Oscar for the body of work in her career. Rounding out the cast here are George Kennedy as a sadistic deputy in the jail, William Schallert as the sheriff’s deputy, Carroll O’Connor (Archie Bunker himself) as a truck driver who plays a key connecting role in the story, Karl Swenson and Lalo Rios as prisoners in the jail, an uncredited Bill Bixby as a helicopter pilot tasked with spotting Burns in the mountains, and Bill Raisch (the One-Armed Man from TV’s The Fugitive) in an uncredited, but memorable part as the bar patron who Jack tangles with in order to get himself arrested.

The movie is presented in its original 2:35:1 aspect ratio for this release. Film grain is organic with greys, blacks, shadows and fine details faithfully represented; there’s minimal instances of issues like scratches, tears, dirt or dust present. Overall, this is likely the best the movie will ever look on home video and a major improvement over previous DVD releases.

The film’s original mono soundtrack is presented on a DTS-HD Master Audio track for this release. Dialogue is strong and clear along with the sound mix; Jerry Goldsmith’s score is also given great clarity and strength along with solid fidelity and direction. There’s little to no instances of problems like hissing, crackling or distortion present here, which means that this is likely the best the movie will ever sound on home video.

Commentary by film historians Howard S. Berger & Steven Mitchell – Newly recorded for this release, Berger and Mitchell go over some of the production details and backstories as well as several of the themes of the movie.

Lonely Are the Brave: A Tribute (19:14) – This featurette, carried over from the Universal Backlot Series DVD release, looks back at the movie and its enduring legacy; among those interviewed are Kirk Douglas, Gena Rowlands, Michael Douglas and Steven Spielberg.

The Music of Lonely Are the Brave (9:46) – Originally featured on the Universal Backlot Series DVD release, this featurette has Robert Townson goes over Jerry Goldsmith’s score for the movie and even features an unused cue for the climax at the end.

While it got shortchanged during its initial release, Lonely Are the Brave has emerged as one of Kirk Douglas’ best films and one of the best – if underrated – westerns ever made by Hollywood. Kino has turned in one of its best stand alone Blu-ray releases of the year, with an excellent transfer and offering up a great new commentary track to go with the vintage special features from previous DVD release. Very highly recommended.

Outstanding review, Mychal. This will be a blind buy for me and I cannot wait to purchase it soon.
B

My Universal DVD is riddled with compression artifacts and needs to be replaced. Does anyone know if this KL version is available from any of the streaming sources?
I'd like to try before I buy, having been disappointed with the picture quality of two other recent KL Blu-ray releases, Charley Varrick and Narrow Margin.
B

I can't imagine what your disappointment was about. I have both Varrick and Margin and they both look and sound great, at least on my system.
B

Big Gay Andy said:
I can't imagine what your disappointment was about. I have both Varrick and Margin and they both look and sound great, at least on my system.
Click to expand...

It may be due to the differences in our systems and viewing conditions. On my LG OLED, viewed in the dark (using ISF dark settings), the picture quality of Charley Varrick is flat and lacks vibrancy compared with the Amazon Prime HD stream however, the special edition extras are superb. Narrow Margin is sourced from StudioCanal (why not the original studio, Carolco/Tristar?) as was the previous SE DVD and carries over many of the DVD's problems, the picture quality varies tremendously scene to scene, it may be a problem with the StudioCanal print or the original photography (Peter Hyams was extremely busy as writer/director/cinematographer). However the Blu-ray is a lot better than the SE DVD (that was particularly poor) and the Amazon Prime SD stream, that is a straight port of the DVD.
I see there is a very positive review of Narrow Margin at Blu-ray.com, I usually rely on them so I'm not sure what's going on. Perhaps my Sony Blu-ray player is at fault? Perhaps it's buyers remorse and I desperately want these films to look better than they ever can?
B

I bought a Sony player and was extremely disappointed with it. It never worked right. Ivid and LG make much better players.

Lonely Are the Brave was Kirk Douglas' favorite film that he made.
B

So, no recommendations on the best HD streaming version?
You must log in or register to reply here. 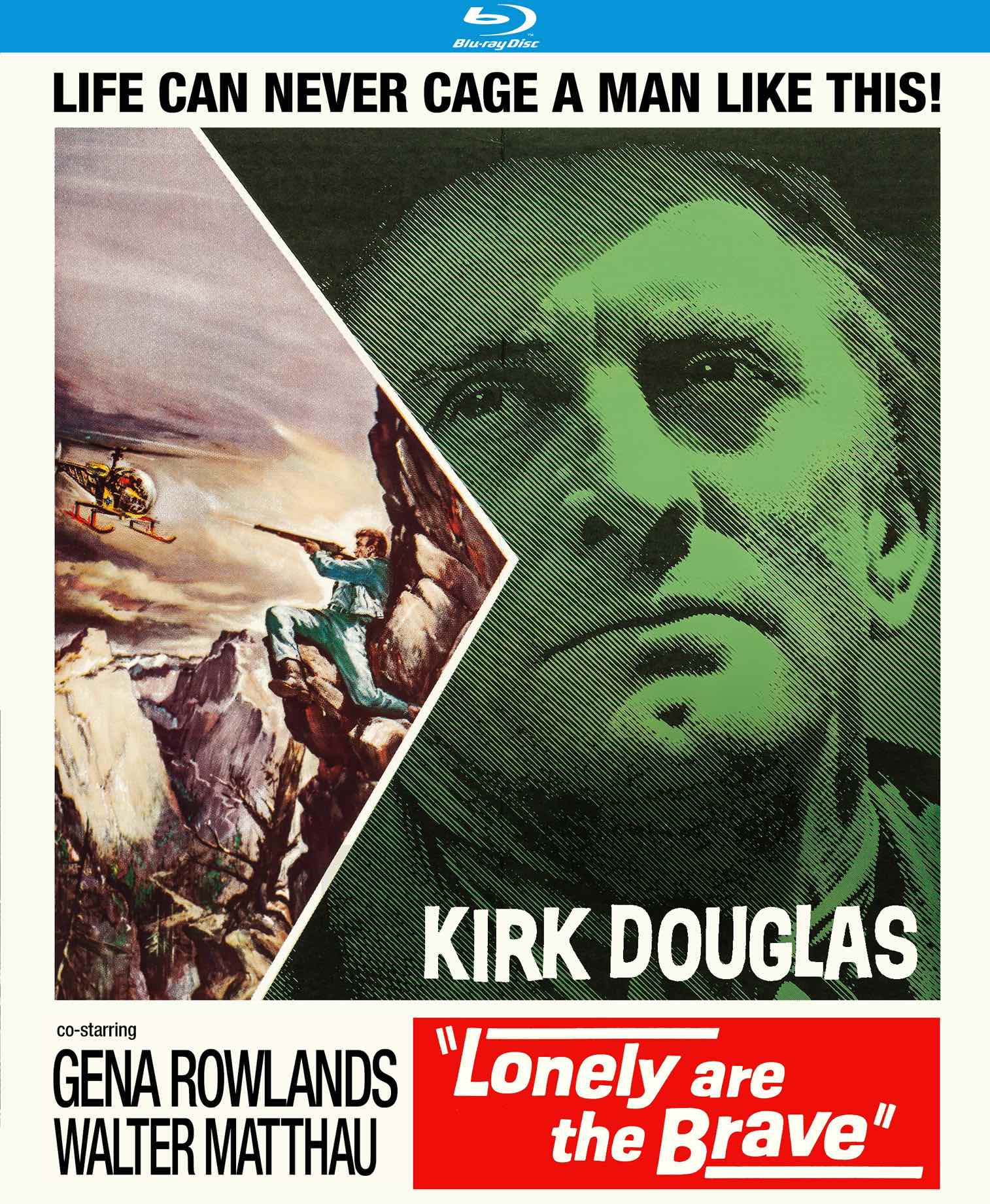