One of the great Gothic thrillers of Hollywood’s Golden Age, John Brahm’s The Lodger offers a gorgeous production, scintillating performances, and effective, sustained suspense in its story of the Ripper on the loose in Victorian London.

One of the great Gothic thrillers of Hollywood’s Golden Age, John Brahm’s The Lodger offers a gorgeous production, scintillating performances, and effective, sustained suspense in its story of the Ripper on the loose in Victorian London. A wonderful cast and expert, unheralded direction make this one of the best films ever made on the subject of the Whitechapel Murderer, and the lead performance by Laird Cregar is so memorable in its madness and searing pathos that it’s almost unbearable to watch, especially poignant knowing the actor’s tragic life which was about to come to an end.

A string of actresses have been murdered in the Whitechapel district of late, and Scotland Yard Detective Inspector John Warwick (George Sanders) is busy on the trail of the killer, a madman who seems to kill and then wait for the desire to kill to build within him again. Meanwhile, Robert Bonting (Sir Cedric Hardwicke)) and his wife Ellen (Sara Allgood) have hit hard times and must take in a lodger to earn some extra cash. The soft-spoken gentleman who calls himself Mr. Slade (Laird Cregar) and has been let the room keeps odd hours, has a litany of phobias and prejudices (especially against actresses), and conducts experiments in the attic room between sneaking out of the house’s back door and returning in the middle of the night. Bonting’s niece Kitty Langley (Merle Oberon) who also lives in the house is a music hall entertainer who fascinates Slade, but despite his odd behaviors, Robert refuses to believe he’s the man the police are so diligently searching for.

Barre Lyndon’s screenplay based on the novel by Marie Belloc Lowndes wasn’t the first version of the book to make it to the screen (Alfred Hitchcock directed a famous silent version of the book in 1927), but its focus on the title character in all his driven manias complete with an incestuous fixation on his dead brother ruined by the love of a flirtatious actress allows the viewer to watch this version of the Ripper up close with attention to his strengths and weaknesses, his furies and his fears with a fascination few movies about the killer have ever offered. Director John Brahm has magnificently captured an expressionistic London filled with swirling fog and deep, heavy shadows (one of the greatest shots in the picture involves Slade running for his life while shadows of scaffolding fly across his face illuminating his madness and amplifying his sense of entrapment) and shot by master cinematographer Lucien Ballard from a variety of interesting angles which sometimes magnifies Slade’s menace and at other times dwarfs him amid the superb backlot London at Fox. Owing to the Production Code, the many murders occur off screen with screams and scurrying passersby providing ample atmosphere for the crimes though the Ripper’s attempt on Kitty’s life is milked for all it’s worth at the climax to the movie, followed by a chase through a shadow-enriched theater that is reminiscent of The Phantom of the Opera.

It’s Laird Cregar’s finest on-screen performance here, exciting and pitiful and threatening and heartbreaking in turn as the maniacal Slade, the actor using his huge frame, expressive eyes, and soft but capably assertive voice to achieve this superb, memorable performance. Merle Oberon is effective, too, as Kitty Langley: beautiful, coquettish, and appealing in a role that’s top-billed but far less important than that of the Ripper. As a music hall performer, Oberon performs two on-screen numbers (vocals dubbed by Lorraine Elliot): “C’est Chic” and “The Parisian Trot” while doing some high stepping while the ensemble does the real dancing behind her. George Sanders as the inspector is more straightforward here than in his usual more sardonic guise and thus less interesting. Sir Cedric Hardwicke and Sara Allgood as the Bontings are excellent: he willing to give Slade the benefit of the doubt as suspicions build against him and she more maternal and understanding as Slade pours his heart out to her about his dead brother. Queenie Leonard as the maid Daisy, Doris Lloyd as a busker named Jennie, and Helena Pickard as one of the tragic victims, failed actress Annie Rowley, all offer solid support.

The film’s aspect ratio of 1.33:1 is presented in a 1080p transfer using the AVC codec. Sharpness is quite striking in this transfer with plenty of details to be gained in close-ups of actors’ faces. Greyscale is good but with blacks that never go quite deep enough. Contrast has been well maintained, difficult for a film so fog-encased, but the encode handles it masterfully. There are some dust specks present, however, and numerous white scratches which have not been removed and sometimes distract. The movie has been divided into 8 chapters.

The DTS-HD Master Audio 2.0 mono sound mix is certainly typical of Golden Era Hollywood. Dialogue has been excellently recorded and has been combined with surety with Hugo Friedhofer’s atmospheric, effective score and the sound effects which punctuate the silence with appropriate noises. There is some variance with volume levels, most notably at a reel change when a reduction in volume is quite noticeable and distracting though other age-related problems with hiss or crackle are not present.

Audio Commentaries: there are two on the disc. The better by a wide margin is the outstanding commentary by Laird Cregar biographer Gregory William Mank who not only gives us background on the star but analyzes the movie’s direction and cinematography and identifies not only the stars but offers career highlights on even smaller featured players. The second commentary track by Alain Silver and James Ursini carried over from the DVD release is a very lacking off-the-cuff set of comments by the two noir historians who haven’t done much homework on the movie and don’t seem really to admire it very much.

The Man in the Attic: The Making of The Lodger (15:37, SD): historians Kim Newman, Dr. Drew Casper, Steve Haberman, Stephen Jones, Christopher Wicking, and Gregory Mank offer historical facts on the Ripper case and give background on the stars and production of the movie.

Restoration Comparison (1:34, SD): split screen shots of three scenes from the film showing the 2007 restoration work done on the movie.

Promo Trailers: The Undying Monster, I Wake Up Screaming.

A beautifully produced and expertly acted Gothic thriller, The Lodger is a masterful suspense picture from the Golden Age of Hollywood. While the Blu-ray doesn’t quite offer a pristine video and audio encode, the release still comes with a firm recommendation. 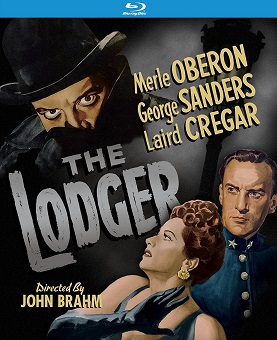