Emphasizing its tragic romance rather than its bleak film noir facets, Nicholas Ray’s They Live by Night is one of the very best youth-on-the-run films ever made.

Emphasizing its tragic romance rather than its bleak film noir facets, Nicholas Ray’s They Live by Night is one of the very best youth-on-the-run films ever made. Featuring a vibrant debut by its director and a tight, engrossing story of a doomed affair undone by circumstance, They Live by Night offers a haunting look at young love with enough switches in tone to continually hold the viewer in its fevered grip.

After escaping from prison, lifers Chickamaw (Howard Da Silva), T-Dub (Jay C. Flippen), and Bowie (Farley Granger) plan a bank robbery with each of them having specific plans for their share of the loot. While hiding out, Bowie meets Chickamaw’s niece Keechie (Cathy O’Donnell) and an uneasy bond is established. Wanting to clear his name, Bowie decides to participate in the robbery with the others so he can afford a lawyer. Though the trio gets away with the money and go their separate ways for a time, Bowie ends up with Keechie and her alcoholic father (Will Wright), and when the robbery is pinned on Bowie as the group’s leader (when all he actually did was drive the getaway car), Bowie and Keechie take it on the lam in an attempt to fashion some kind of normal existence for themselves. But the past has a way of catching up with even the most reformed criminals, and Bowie finds his plans for a normal life are continually being thwarted.

With a screenplay by Charles Schnee adapted by director Nicholas Ray from depression era novelist Edward Anderson’s Thieves Like Us (later to be remade with a completely different mood by Robert Altman under the original title), the plot’s central focus is on the budding romantic involvement of these two emotional virgins with the all the ups and downs that happen to all young couples as they tentatively try to make a way for themselves in the world, these two hampered, of course, by the young man’s sudden notoriety and constant threat that their matrimonial idyll will all come to a sudden and violent end (and the relationship definitely goes through some strain; it’s not all utopia). Director Ray in his first outing as the lead director offers viewers what might otherwise be commonplace narrative set-ups (the introductory escape, a bank robbery, a bus trip, an impromptu wedding, a first Christmas, a nightclub outing, a climactic shootout) with wonderfully fresh approaches utilizing helicopter shots and other high and low angle perspectives, using sound rather than visuals to portray the murder of a policeman, and picturing Marie Bryant’s nightclub performance of “Your Red Wagon” with the singer alluringly weaving among the spectators gladly taking tips on the spot for her efforts. George Diskant’s deep focus photography is often quite effective allowing us to see actions and reactions from a handful of principals all in the same shot (a sojourn on a night bus is especially effective) and guided by Ray allows us to grow tremendously close to the young couple who simply can’t catch any kind of break in their efforts to reach a place of tranquility.

Though early in the careers of both Farley Granger and Cathy O’Donnell, neither actor ever did anything better on the screen than their work in this movie, both being believable and heart-rending participants in a youthful relationship that’s inexorably doomed (she especially runs a gamut of emotions that should have been a stepping stone to stardom for her). Howard da Silva as the creepy, tough Chickamaw is likewise uncomfortably memorable, the kind of person that one knows he’ll never escape as long as he lives. Jay C. Flippen as the lesser of two evils also offers effective support for the film as do a host of talented character actors who take their small roles and etch real quality performances: Helen Craig as the duplicitous Maggie, Will Wright as the toothless, drunken Mobley, Ian Wolfe as the calculating justice of the peace, and Byron Foulger as the too jolly innkeeper Lambert.

The film’s original 1.37:1 theatrical aspect ratio is faithfully rendered in this 1080p transfer using the AVC codec. Sharpness is outstanding throughout except in scenes where the original photography was ill-focused, and the image is remarkably free from age-related scratch and dirt artifacts. The grayscale is wonderfully rich with deep black levels and clean whites. Contrast has been beautifully and consistently maintained for an optimal image. The movie has been divided into 23 chapters.

The PCM 1.0 (1.1 Mbps) sound mix is typical of its era with the dialogue well-recorded and blended with surety with some pop songs of the era and Leigh Harline’s original score along with the proper atmospheric effects for the movie. While fidelity sometimes seems slightly anemic, there are no age-related problems with hiss, crackle, thumps, or flutter.

Audio Commentary: film noir historian Eddie Muller engages in a question and answer discussion of the movie, its cast and crew with star Farley Granger who through the decades which separate him from the film’s production has softened many of his recollections of its making. Still, it’s a worthwhile listen.

Imogen Sara Smith Interview (20:53, HD): the film critic discusses the movie as one of the first which takes film noir in a different direction, has thoughts on the career of its director, and compares the film to other partners-in-crime film scenarios.

John Houseman Audio Interview (6:36, HD): the film’s producer is interviewed in 1956 by the Film Forum stating his philosophy of film production especially relating to his most recent accomplishment Julius Caesar.

Enclosed Pamphlet: contains cast and crew lists, a couple of stills, information on the audio and video transfers, and an enlightening analysis of the movie and its impact by film scholar Bernard Eisenschitz.

A strangely tender tragedy of young love and its hopeless optimism, They Live by Night is one of the more memorable small films to emerge from the postwar period from enterprising young director Nicholas Ray. The Criterion Blu-ray release offers a superb high definition video transfer and a clutch of bonus features which give added value to the package. Highly recommended! 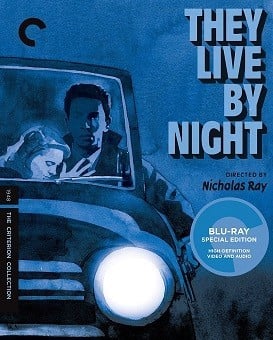