Believe it or not, but Hollywood has a long history of body swap comedies, some of the more famous being Disney’s Freaky Friday (1976, 2003, 2018), All of Me (1984), Big (1988), and 17 Again (2009). Director Tina Gordon’s Little has a premise that sounds like a reversal of Big (even in the title), and I’ll give it points for its nearly all black female cast, but ultimately it is a predictable story with jokes that never quite deliver.

Jordan Sanders (Marsai Martin from Blackish) had a horribly embarrassing incident while in junior high that scarred her emotionally for life. Now grown up, Jordan (Regina Hall) is a bully, belittling and taunting her subordinates, especially her assistant April (Issa Rae), who she calls at all hours of the day and night is anything doesn’t go her way. She is a completely unlikeable and cruel character, completely selfish and spoiled to the core. When a young magician witnesses Jordan publicly mistreating April, she casts a spell on her. The next morning, Jordan awakens back in her 13 year old body. April unwillfully at first takes charge as the surrogate parent to the younger Jordan, who quickly finds herself back at the same school dealing with the issues that scarred her previously while still trying to run her business in between classes over the phone.

The film’s biggest problem (sorry) is the introduction of its main character, Jordan, and the film places perhaps too much trust in its audience for it to root for and care that Jordan realize the error of her ways and “grow up.” The story is very predictable, and there are characters that are introduced, like teacher Mr. Marshall (Justin Hartley), that are partially developed and then never heard from again. The jokes are routine for the genre, with nothing really new. The three leads are terrific, with Regina Hall going full-on OCD crazy and mean as the grown up Jordan, Marsai Martin as the grown woman trapped in a 13 year old body, and Issa Rae playing comically off of both actresses. The real talent here is Martin, who is incredibly convincing as the mini-me Jordan, who also pitched the project to the producers and even received an Executive Producer credit.

Universal’s 1080p AVC-encoded transfer, which retains the films 1.85:1 theatrical aspect ratio, is another excellent release from the studio. Colors are bold and vivid throughout, with no evidence of any blooming or banding. Contrast is excellent with bright whites that don’t clip and blacks that are inky and full of shadow detail without crushing. Detail is also excellent, from fabric textures to Martin’s frizzy hair.

The DTS-HD Master Audio 5.1 track is a fairly standard front-heavy (for the most part) comedy mix. Dialogue is clear and understandable, directed mostly to the center channel. Music and atmospherics round out the surrounds, with LFE giving them a nicely enhanced low end.

Apparently, the new menu design that debuted with Universal’s Happy Death Day 2 U is the studio’s new template, with the usual main menu selections (Play Movie, Setup, Scenes, Extras) at the bottom, but the Extras also appearing in a window along the right third of the screen. The Special Features also begin automatically upon the completion of the film.

Regina Goes Method (1080p; 6:11): Actress Regina Hall discusses her character and the challenge of playing against her type.

Issa Rae’s Assistant Survival Guide (1080p; 2:17): How to survive being an assistant to an overbearing boss.

DVD Copy: The movie in 480p Dolby Digital 5. audio and all of the special features listed above.

I thought this film was pretty bad. Again almost all the laughs were in the trailer. And Jordan Sanders was the main problem. Soooo annoying.

It's a reverse "Big" without the charm and wit and creativity!
Reactions: Tino

My wife and I liked this movie more than you. I am a big fan of Regina Hall, and am becoming a big fan of Issa Rae, so that certainly helped. I had the chance to talk to James Lopez, Producer on this film (and President of Will Packer Productions) in an extended interview about little and more about the work they do and their upcoming production slate. Check it out if you like:
https://www.hometheaterforum.com/co...ent-of-will-packer-productions-little.362915/ 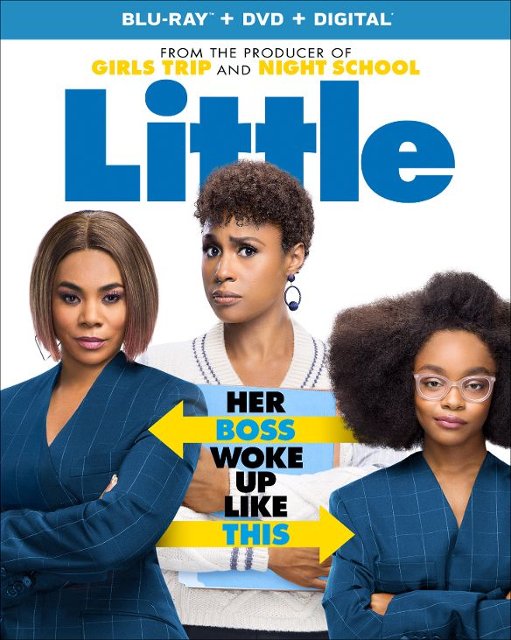