Forum List What's new Dark Style Change width
Log in Register
What's new Search
Menu
Log in
Register
Navigation
Install the app
More options
Dark Style
Close Menu
Posted on August 7, 2017 by Matt Hough
You are using an out of date browser. It may not display this or other websites correctly.
You should upgrade or use an alternative browser.
Entertaining courtroom drama/character study 3.5 Stars

A courtroom thriller more concerned with its own twists and turns than with the solution of a mystery, Brad Furman’s The Lincoln Lawyer brings the best-selling novel by Michael Connelly to the screen, excellently acted, produced, and directed but just missing that extra jolt of something special that world elevate this material from good to great.

A courtroom thriller more concerned with its own twists and turns than with the solution of a mystery, Brad Furman’s The Lincoln Lawyer brings the best-selling novel by Michael Connelly to the screen, excellently acted, produced, and directed but just missing that extra jolt of something special that world elevate this material from good to great. Still, it’s a very watchable and entertaining courtroom drama, and there are plenty of revelations that keep the viewer from ever getting complacent.

Mick Haller (Matthew McConaughey) is a slick attorney who operates out of the back seat of his luxurious Lincoln Continental, chauffeured around Los Angeles by his driver Earl (Laurence Mason) and willing to represent any strata of society as long as they can pay his hefty fees. Bail bondsman Val Valenzuela (John Leguizamo) sends him the case of a lifetime: a wealthy Beverly Hills playboy Louis Roulet (Ryan Phillippe) has been accused of raping and attempting to murder a prostitute, Regina Campo (Margarita Levieva). Louis swears his innocence and his lack of a record and a baby face that a jury would love initially make the case seem an easy win as Haller sees this as a potential huge payday for him, well over six figures. But there are landmines all along the way of the investigation, and it isn’t long before Mick discovers ties from this case to an earlier plea bargain he had instigated for another less affluent client, Jesus Martinez (Michael Pena), and once that discovery is made, Mick and his closest family, ex-wife Maggie (Marisa Tomei) and his investigator Frank Levin (William H. Macy), become targets whose lives are now in jeopardy.

John Romano’s screenplay has to take some shortcuts in condensing the novel for the screen, and many of the characters become types rather than fully fleshed out persons. That includes investigator Frank Levin, Louis’ powerful mother Mary (Frances Fisher), and the backstory of Mick and Maggie’s incendiary marriage. But the script does an excellent job showing us the crafty nature of Mick Haller who knows all the angles in squeezing as much money from wealthy clients and insisting with everyone he represents that he must be paid up front (a confrontation with a biker gang in the early minutes of the movie has some satisfying payoff in several of the last scenes in the movie). Flashbacks also allow us to see Mick’s behavior with problematic clients and with his wife which also help build a complete portrait of the wily individual at the center of the drama. Director Brad Furman makes certain all of the courtroom scenes are nicely framed and shot with judicious use of close-ups and zooms at key moments though he occasionally gets a bit too showy with circular camera movements rather than cutting to capture reactions from several characters in the same scene.

Escaping from the hell of too many banal romantic comedies during this period of his career, Matthew McConaughey does very good work in the courtroom and out of it (even with the excess drinking scenes which never leave his frisky earlier screen persona too far behind). Ryan Phillippe is very good, too, using his pretty boy looks and moist eyes and quivering jaw to earn much audience sympathy in the early going before settling in with his earnest character in the courtroom and a more cunning character outside of it. Marisa Tomei is rather wasted as the ex-wife with only glimmers offered of their past life together, both loving and adversarial. William H. Macy barely has enough screen time to establish his quirky investigator character, but other notable character actors like Bryan Cranston as a suspicious police detective, Frances Fisher as the demanding mother of the accused, Bob Gunton as the family lawyer, Josh Lucas as the prosecuting attorney, Michael Pena as a pathetic earlier client of Mick’s, and John Leguizamo as the too friendly bail bondsman all score nicely with their various characters.

The film is presented in its theatrical aspect ratio of 2.35:1, in 2160p resolution using the HEVC codec. Compared to the 2011 Blu-ray release, this UHD transfer has been color timed a bit on the brown side with colors more subdued and controlled than the previous 1080p transfer. Sharpness is superb with facial features coming across very detailed and revelatory. Black and near black levels are impressive. HDR has been applied carefully and effectively to the image through there is one moment with light streaming through a window where brightness is a bit over-the-top and uncomfortable for viewing. The movie has been divided into 16 chapters.

The Dolby Atmos sound mix (decoded by my equipment to the Dolby TrueHD 7.1 core) is beautifully balanced with dialogue always clearly recorded and presented in the center channel. The background score of Cliff Martinez and various raps threaded through the story get marvelous surround treatment. Atmospheric effects likewise get placed in the fronts and rears though this being primarily a courtroom drama, there is less opportunity for aural fireworks than in more action-filled movies.

The UHD disc contains the identical bonus feature content carried over in 1080p from the Blu-ray disc (which is also included in the package). These descriptions of the bonus materials are taken from reviewer Tim Ewanyshyn’s Blu-ray review, the complete version of which can be found here:

Making The Case: Creating The Lincoln Lawyer (13:40): This featurette includes interviews with cast and crew regarding production of the film.

Michael Connelly: At Home On The Road (10:16): Author Connelly talks about his initial concerns in translating his book to the screen and his apparent satisfaction with the result.

One on One With McConaughey and Connelly (5:28): Author Connelly conducts a brief interview of the star who plays his fictional character on screen.

Bookmarks: Feature allows viewers to return quickly to certain portions or clips of the film.

Blu-ray/Ultraviolet: disc and code sheet enclosed in the case.

The Lincoln Lawyer is an entertaining courtroom thriller filled with surprises and is quite satisfyingly acted by a first-rate, award-winning cast. The UHD release has a somewhat different visual look in this new transfer from the previous Blu-ray though the identical bonus materials have been carried over from the previous release, and the package contains the original Blu-ray release of the movie regardless. 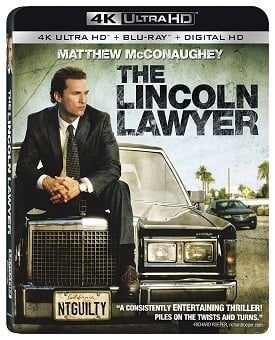