Posted on March 31, 2016 by Matt Hough
Classic comedy-drama of the 1960s with a tremendous star performance 4.5 Stars

Ralph Nelson’s Lilies of the Field works its quiet magic on an audience so splendiferously that one isn’t quite aware he’s caught up in its storytelling until it’s almost over. It’s small film with mounds of heart but with sentiment soft-pedaled and never cloying.

Ralph Nelson’s Lilies of the Field works its quiet magic on an audience so splendiferously that one isn’t quite aware he’s so caught up in its storytelling until it’s almost over. A small film with mounds of heart but with sentiment soft-pedaled and never cloying, Lilies of the Field still affords pleasurable viewing to those interested in solid storytelling, interesting characters, and unfussy direction.

Itinerant handyman Homer Smith (Sidney Poitier) stops at a tiny mission hut needing water to cool his car radiator, but to the nuns housed there, it’s God answering their prayer. They not only have a roof that needs patching but are in desperate need of a strong man to help them finish building a chapel for their small southwestern community. Mother Superior (Lilia Skala) goads and guilts Homer into doing the work for their meager stores of provisions, and while the deal he strikes is that he’ll do the work if the nuns get the materials, he in effect must supplement his income by taking a job as a heavy machinery operator during the down times when materials for the chapel are scant. But as time passes, he finds he is happier and more satisfied doing something worthwhile for others than he’s been in a long time, and when the townspeople see how joyously hard he’s working, they want to help, too.

It’s a small, delicate story that screenwriter James Poe has adapted from the novella by William E. Barrett, but every scene contributes something major to the overall impact of the movie, and each one shines like a little gem. Ordinary conversations (say between Poitier’s Homer and the local cafe owner played by Stanley Adams or Homer and the traveling priest played by Dan Frazer) are small pearls of pleasure as we see each man with dreams not quite realized and yet with a chance to further their faith and courage by helping this chapel get built. And director Ralph Nelson (who also plays the construction company owner who ends up figuring prominently into the story) stages some delightful moments that stay in the memory long after the film concludes: Homer coaching the German-speaking nuns on their English, a singalong with Homer and nuns with the snappy gospel tune “A-Men,” the townsfolk finally breaking down Homer’s stubbornness to do all of the work himself, Homer “signing” his work, and that magical moment as Father Murphy sees the fruits of their labors for the first time, all special sequences that affect both the head and the heart.

Sidney Poitier, of course, famously won the Best Actor Oscar for his performance, a first for an African-American male, and his charisma, charm, and feistiness all land front and center during most of the movie (his absence is certainly felt during a middle portion when Homer takes off for three weeks to find himself, leaving the project and the sisters high and dry). He’s obviously dubbed in the singing scenes (Jester Hairston provided the vocals, not a particularly propitious voice match for the star), but his enthusiasm and warmth overcome any such quibbles. Lilia Skala as Mother Maria earned her own Oscar nomination for her bold, brassy Mother Superior, and it’s a tender moment when she finally realizes she’s gotten all the work out of Homer that she needs for the project. Lisa Mann, Isa Crino, Francesca Jarvis, and Pamela Branch play the other sisters at the small convent with charm and ease. Stanley Adams as the café owner and Dan Frazer as Father Murphy both do memorable work in their supporting parts.

The movie has been framed at 1.66:1 for this Blu-ray presentation and is presented in 1080p resolution using the AVC codec. Sharpness is excellent throughout, and the grayscale offers really deep black levels and crisp, pure whites. Contrast has been consistently maintained. Only a stray speck here and there mar an otherwise faultless presentation. The movie has been divided into 24 chapters.

The DTS-HD Master Audio 1.0 sound mix is very typical for a low budget movie of the period (the film was made for less than half a million dollars). Dialogue has been masterfully recorded, and it has been blended together with surety with Jerry Goldsmith’s enjoyable background music and the atmospheric effects into an involving mono sound mix. No age-related problems with hiss, crackle, or hum spoil the feature’s aural presentation.

Audio Commentary: producer Nick Redman, film historian Julie Kirgo, and screenwriter Lem Dobbs have another one of their intelligent discussions of the film and its principal members of the cast and crew.

Lilies of the Field brings one of the 1960’s classic comedy-dramas to high definition home video with excellent bonus material and the feature looking and sounding at its best. Highly recommended! There are only 3,000 copies of this Blu-ray available. Those interested in purchasing it should go to either www.twilighttimemovies.com or www.screenarchives.com to see if product is still in stock. Information about the movie can also be found via Facebook at www.facebook.com/twilighttimemovies. 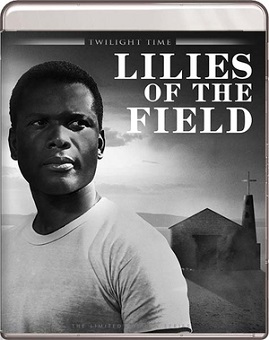