Tearjerking melodrama won't be for all tastes. 3.5 Stars

An emotional melodrama that will move you just as quickly to anger as it will to tears, Derek Cianfance’s The Light Between Oceans is a beautifully made but dramatically unsteady movie of the old school.

An emotional melodrama that will move you just as quickly to anger as it will to tears, Derek Cianfance’s The Light Between Oceans is a beautifully made but dramatically unsteady movie of the old school. Reveling in its measured narrative and gorgeous locations, the movie features characters that alternately infuriate and enchant, and the viewer will find it simply impossible not to take sides in what appears to be a no-win situation as the story unfolds. Carefully modulated direction and intense performances are hallmarks of this worthy effort.

After suffering two miscarriages in two years, Janus Island lighthouse keeper Tom Sherbourne (Michael Fassbender) and his delicate wife Isabel (Alicia Vikander) are astonished one day to find a runaway rowboat at sea containing a wailing infant and (presumably) its dead father. Though Tom wants to follow protocol and report the man’s death and the existence of the foundling, Isabel, desperate to be a mother, begs him so earnestly to bury the body and keep the baby calling it their own that he finally gives in. But at the baby’s christening, Tom sees a young woman Hannah Roennfeldt (Rachel Weisz) weeping in the cemetery and upon looking at the tombstone of Frank Roennfeldt (Leon Ford) and infant baby Grace lost at sea that he instantly knows she’s the mother of the rescued baby. To ease his conscience, he slips an anonymous note in her mailbox assuring her of her baby’s well-being, but the missive only electrifies the mother’s passion to find her missing child alerting the local police sergeant (Anthony Hayes) to begin a new investigation.

Based on M.L. Stedman’s novel, director Derek Cianfrance’s screenplay takes us step-by-step through the arrival of haunted World War I survivor Tom Sherbourne to take over the lighthouse duties, his being instantly smitten with Isabel at first meeting, their courtship by mail, their wedding, and the two miscarriages, all covering the years 1918-1923 in the film’s first half hour or so. Cianfrance spends considerable time showing us the everyday life of a lighthouse keeper, and the sense of loneliness which he craves (at first) before his desire for Isabel brings him back to life. It’s these nuances throughout that give a true sense of place and pacing to the movie. Once the baby enters the story, narrative comes to the fore, and the movie sets off down its melodramatic path with the young husband wanting to do right by the grieving mother while not betraying his wife but realizing that at a certain point, it won’t be possible to placate both sides making for one of the more interesting kinds of love triangles in films: three people all loving a baby and wanting to do right by her. Writer-director Cianfance also attempts to give us some backstory on the marriage of Hannah to the much disliked German Frank Roennfeldt, but those scenes are choppy and intrusive a bit, not blending well with the so smoothly illustrated early marriage years of Tom and Isabel. During the second half of the film, however, one comes to rather despise the Isabel character who is so blinded by her own desire for a child that she can’t see how her selfish wants are hurting other people (at one point, her husband is going on trial for murder because in her anger over losing the child, she can’t see anyone’s pain but her own even though he’s taking the fall for what was her idea all along). The angst-filled final third of the movie is rather frustrating for the audience (though the tearjerking finale does all it can in recompense for messing with viewers’ psyches earlier), but the director and cast give it their all, going for heavy emotion throughout with tears flowing, teeth gnashing, and lives ruined all around.

Michael Fassbender is the stoic soul of integrity through most of the film, rather too good to be true oftentimes but certainly acting with his customary control and preciseness. Alicia Vikander is rather a bit petulant in many ways, her character acting more juvenile than her years (especially for the time era covered in the film) and not one of the more admirable characters in the piece. Rachel Weisz is on a lot more solid ground as the heartbroken mother given a new lease on life even if she has much less to do than her co-stars. Bryan Brown as her father has a terrific scene near film’s end with his granddaughter played by then by the fetching Florence Clery. Jack Thompson is a strong, forceful presence as Tom’s best friend Ralph Addicott, and Anthony Hayes is all business as Sergeant Vernon Knuckey.

The film’s 2.40:1 theatrical aspect ratio is faithfully rendered in 1080p resolution using the AVC codec. Shot digitally using all natural light, the film has very pleasing sharpness with detail in close-ups all one would ask for. Color is magnificently controlled with many views of sun-dappled seas and the black and white striped lighthouse in relief against blue-gray skies astonishing in their power. Skin tones are nicely rendered as well. Black levels are excellent, and contrast has been consistently maintained. The movie has been divided into 20 chapters.

The DTS-HD Master Audio 7.1 sound mix offers astonishing power when the seas are at their most tumultuous (a soul-stirring gale during Isabel’s first miscarriage will rattle the windows of your home). Alexandre Desplat’s emotional score gets a vibrant spread through the front and rear channels. Dialogue resides mostly in the center channel with a couple of slight instances of directionalized placement. Atmospheric effects likewise get appropriately routed to the proper channels for optimum impact.

Audio Commentary: writer-director Derek Cianfance and his film professor Phil Solomon have a very engaging give and take conversation during the movie as the director explains his choices and Professor Solomon questions his student and praises what he’s seeing on the screen.

Lighthouse Keeper (5:40, HD): the lighthouse keeper at Cape Campbell in New Zealand Ron Sword describes his vocation and how it figured into the work of the actors in the movie, specifically Michael Fassbender and Alicia Vikander who lived on the lighthouse property during filming. Director Derek Cianfance and producer Jeffrey Clifford also comment on the location.

Derek Cianfance’s The Light Between Oceans harkens back to romantic and domestic melodramas of the 1940s and 1950s (The Great Lie, Now Voyager, Magnificent Obsession come immediately to mind). Fine acting and exquisite locations heighten the tearjerking angst of the piece, and the Blu-ray audio and video quality certainly make it a must see for lovers of that particular genre. 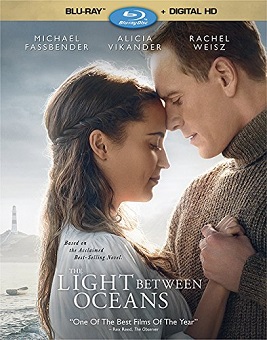