Another malevolent alien does away with a spaceship full of crew in Daniel Espinosa’s Life, an effective if painfully derivative sci-fi horror picture released within weeks of Ridley Scott’s next Alien adventure.

Another malevolent alien does away with a spaceship full of crew in Daniel Espinosa’s Life, an effective if painfully derivative sci-fi horror picture released within weeks of Ridley Scott’s next Alien adventure. State of the art special effects enhance the outer space activity in the film as well as creating a most convincing alien quite different but just as deadly as Ridley Scott’s original space killer, but the plots of Life and Alien are fairly identical with only the vagaries of fate and its ending to really differentiate the films in any meaningful way.

Six astronauts (Jake Gyllenhaal, Rebecca Ferguson, Ryan Reynolds, Hiroyuki Sanada, Ariyon Bakare, Olga Dihovichnaya) aboard the International Space Station are on the cutting edge of one of the most important discoveries in human history: the first evidence of extraterrestrial life brought back from Mars. The single cell organism which an Earth school names “Calvin” is awakened from its hibernation when exposed to an oxygen/hydrogen/carbon dioxide mix similar to Earth’s atmosphere. As members of the crew continue to conduct their research on the organism, they’re surprised and a bit perturbed by the rapidly evolving life-form which has incredible strength and an ability to withstand the harshest conditions for extended periods. Once Calvin gains access to the ship proper, it begins picking off the crew members one by one as the survivors frantically try to contain the problem and not allow the space station to get back to Earth with its deadly cargo.

There is nothing at all distinguished about the Rhett Reese-Paul Wernick screenplay, but it’s certainly notable in the incredible series of bone-headed mistakes these allegedly intelligent members of the crew continually make especially throwing caution to the wind even when it becomes very obvious that the alien’s strength and survival abilities are extraordinary. No matter how noble it is to try to save their fellows once the creature has them in its grasp, such foolhardy stabs at heroism inevitably doom their chances with each passing crew member. Director Daniel Espinosa manages to keep the violence at bay for almost half an hour before Calvin begins his deadly quest (and we’re lulled into a false sense of security as well by composer Jon Ekstrand’s celestial music that plays anytime the embryonic Calvin is in movement), the director filming ship activities creatively by flipping the camera on its head on occasion and letting us get glimpses into the various personalities of its shipmates: all business ship’s doctor David Jordan (Gyllenhaal), crew cut-up Rory Adams (Reynolds), family man Sho Murakami (Sanada) whose wife has just given birth on Earth, the curiosity-prone science officer Hugh Derry (Bakare) whose experiments actually unleash the beast. Later on, action is pretty relentless as the survivors try to trap the creature in an airlock or lure it outside hoping it will die in the vacuum of space (naturally, nature and the screenwriters have given it special gifts to insure its survival), but you’ll likely find yourself screaming at the screen as silly mistakes are made one after another that keep the body count increasing. Director Espinosa even tries some Calvin point of view shots that seem ill-conceived and ineffective.

It’s an ensemble piece, and no performance from the international cast rises above the others, not even the big names like Jake Gyllenhaal and Ryan Reynolds who play variations on characters we’ve seen before. Ariyon Bakare is perhaps the most affecting of the performers getting to play his curious scientist who finds Calvin’s early stages of development endearing and fascinating and later is plagued by guilt over exposing everyone else (and possibly Earth itself) to this alien creature.

The film’s 2.39:1 theatrical aspect ratio is rendered in a 2160p transfer using the HEVC codec. Sharpness is all one could wish with the intricacies of the alien’s insides seen through its translucent skin making for very arresting viewing. The splendid production design of the space station with all its compartments is likewise fascinating because we can view it so crisply. Color is always well controlled with quite realistic skin tones, and the blacks of space, perhaps enhanced by the use of HDR, are deep but nicely managed in various variations of black and deepest gray. HDR also enhances some splendid bursts of light on occasion from sunlight streaming through portholes and bouncing off the space station to the effective white fur of a mouse in the space laboratory. The movie has been divided into 16 chapters.

The Dolby Atmos sound mix is big and bold (you may even want to reduce the volume to your system as I did for fear of equipment damage even with my receiver only decoding the Dolby TrueHD 7.1 core), and there will be very few complaints over the use of sound in the picture. Dialogue has been relegated to the center channel, but numerous split atmospheric effects and Jon Ekstrand’s booming score will give your entire soundfield a big workout and that includes the LFE channel with almost endless bass extensions once the alien is on the loose.

The UHD disc contains no bonus material. All of that is contained on the enclosed Blu-ray disc also in the case. The below descriptions are from reviewer Kevin Koster’s Blu-ray review of this release. You can read his entire Blu-ray review here.

Deleted Scenes (5:49 Total, 1080p) – Six deleted scenes are included here, which may be viewed individually or via the usual “Play All” option. Nearly all of them have been pulled from the early section of the movie before things really get going, and none of them adds anything of significance.

Life in Zero G (6:54, 1080p) – The first short featurette discusses the challenges of making a movie set on a space station in zero gravity, thus requiring wire rigs and plenty of CGI removal. Multiple people provide sound bites on this idea, including director Daniel Espinosa, movement coach Alexandra Reynolds, stunt coordinator Franklin Henson and medical space sciences specialist Dr. Kevin Fong. (It is truly a shame that after all that work, they did not monitor whether or not people were still dropping toward the floor in multiple shots and thus blowing the illusion they were trying to maintain…)

Creating Life: The Art and Reality of Calvin (7:07, 1080p) – This featurette gets into the design elements – particularly in how Calvin itself was conceived and presented. Writer/producers Paul Wernick and Rhett Reese expound on this, as does Dr. Adam Rutherford, co-VFX supervisor Tom Debenham and supervising art director Marc Homes.

Claustrophobic Terror: Creating a Thriller in Space (7:28, 1080p) – The final featurette gets into many more mutual compliments from cast and director Espinosa, with everyone talking about how scary the script and idea are.   I really must note that when you total all three featurettes together, you come out at roughly 21 minutes, which means that they could have combined all three of these together, removed some of the duplicative film clips and had a decent, albeit brief, look at the movie’s production.   Audiences are fully aware that these featurettes always have a few clips, buttressed with the usual on-set footage and a few soundbites.   By dividing the featurettes into three pieces, the content makers have only added more extraneous film clip moments and padded their running time.   Thankfully, this was not a situation of just having 2-3 minute quickie featurettes, but the same principle still opens this group up for criticism.

Astronaut Diaries (3:00 Total, 1080p) – Here are three quick monologues to camera, in character, from Ryan Reynolds, Rebecca Ferguson and Ariyon Bakare. Each runs maybe one minute, and all were clearly prepared for social media promotion.

Even if the idea is unoriginal and the treatment of it merely slightly above average, Life will unquestionably offer some edge of your seat moments, and for a popcorn picture that only means to serve us some thrills and jolts, perhaps that’s enough. The UHD transfer with reference quality picture and Dolby Atmos sound is certainly anything but mundane and would be the preferred vessel for viewing this creature feature. 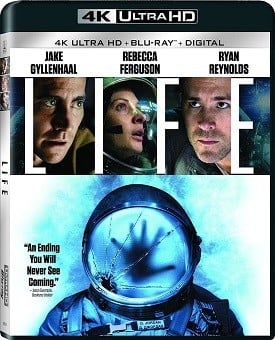