Forum List What's new Dark Style Change width
Log in Register
What's new Search
Menu
Log in
Register
Navigation
Install the app
More options
Dark Style
Close Menu
Posted on July 25, 2018 by Josh Steinberg
You are using an out of date browser. It may not display this or other websites correctly.
You should upgrade or use an alternative browser.
Marilyn Monroe’s penultimate film. 3.5 Stars

Marilyn Monroe and Yves Montand co-star in this 1960 musical from Twentieth Century Fox and director George Cukor. While not the best work by anyone involved, Let’s Make Love is nonetheless an entertaining, if overlong, romantic comedy about mistaken identity.

Let’s Make Love has a lot going for it. The promise of a musical comedy starring Marilyn Monroe and directed by the great George Cukor is impossible to pass up. Throw in the French star Yves Montand as the male lead, a supporting appearance by Tony Randall, and cameos from Milton Berle, Bing Crosby and Gene Kelly, and it should be smooth sailing. But the movie lurches along in fits and starts, placing too much emphasis on bland musical numbers featuring Frankie Vaughan, while not paying enough attention to Monroe.

The film opens with an amusing but far too long prologue of historical stills set to narration which explains that Jean-Marc Clement (Montand) is a billionaire who has inherited his wealth as the latest in a long line of obscenely wealthy descendants. When his staff (including Randall and Wilfrid Hyde-White) discover that Clement is to be satirized in an off-Broadway show as a stuffy, unfeeling and out-of-touch jerk, they bring the news to Clement’s attention, preparing to use his wealth and connections to shut the show down. But to his staff’s dismay, and for his own amusement, Clement is curious to see the in-progress show for himself. He visits the theater, where he spots a gorgeous lead actress, Amanda (Monroe) performing. As he waits around the theater hoping to meet her, he is instead mistaken for an actor auditioning to play the part of Clement in the show. Unable to persuade the production that he’s the real Clement, he finds himself cast in the show, and decides to go along with it. Though Amanda is supposed to be involved with the show’s lead (Vaughn), she finds herself liking Clement without having any idea of who he really is.

The story is tried and true, and the simple setup isn’t heavily elaborated upon, leaving a classic premise rather thin in this telling. The film has its share of flaws, but they all come back to a script which doesn’t properly utilize the talent on-hand. Montand is actually quite amusing in his role, and is given more to work with than everyone else. But as a result, the balance is off. Monroe gets top billing but is stuck in what amounts to an underwritten supporting role. While Monroe gets to perform in a musical number, the film comes to life. Unfortunately, as soon as Vaughn enters to perform (which happens surprisingly often for a character who serves very little purpose in the final narrative), the film goes back to sleep. It appears that the film began life as a script by Norman Krasna, who had written quite a few quality scripts prior to this, including the great Cary Grant comedy Indiscreet. But when Monroe signed on to the picture, as the story goes, her then-husband Arthur Miller took interest in adding some material (uncredited) to beef up Monroe’s part. Whether it was Miller’s alleged tampering, or whether Krasna’s original script was flawed from the start, the balance here is all wrong. For all of the characterization that Montand is given to work with, Monroe gets almost none. The camera loves her; the script does not.

The musical numbers are mostly inconsequential. While the songs are good enough to listen to as they happen, the film lacks a show-stopping number. (A less charitable review might point out that the film lacks even a number that’s memorable enough to hum.) Though Frankie Vaughn’s character is meant to be a romantic rival and obstacle for Montand in competing for Monroe’s affections, at no point is Vaughn credible as anything of the sort. This is more the fault of the material than Vaughn, but his scenes do tend drag regardless. And Cukor, who won an Academy Award for directing My Fair Lady, seems to be lacking inspiration in his staging of the performances here.

In the end, Let’s Make Love isn’t a bad film, just an uninspired one. With a cast led by Marilyn Monroe, and with George Cukor at the helm, this should be a great film, and it just isn’t. But there are enough small pleasures to make it a worthwhile if frustrating experience. And when that small pleasure comes in the form of Milton Berle making a scene-stealing (heck, movie-stealing) cameo, it’s easy to forget the lesser moments.

Let’s Make Love is presented in its original CinemaScope aspect ratio of 2.35:1. On the positive side, the transfer is very clean and steady, appearing virtually spotless. Grain appears natural and adds a pleasing look to the presentation. On the more critical side, the transfer is not particularly sharp, and the color often has a muted, slightly faded look to it. It is by no means a terrible presentation, but is not reference quality either.

There are two options available for audio, both presented in the lossless DTS HD-MA format: a 5.1 track and a 2.0 track. Unfortunately, the packaging does not give a hint as to the provenance of the tracks. Both are quality tracks. The 5.1 mix is mostly oriented towards the front speakers and features some mildly directional dialogue. While the 2.0 doesn’t have the same sense of separation, it is just as clean as it’s 5.1 counterpart. Both versions have clearly recorded dialogue that is never difficult to understand.

Isolated Music Track – The track, presented in lossless DTS-HD MA stereo, presents both the score and the songs from the film; most of the songs are presented with just the backing instrumental but occasionally a vocal performance is featured. The score sounds particularly good in this recording.

Original Theatrical Trailer (3:10, HD) – The trailer, cropped to 1.85:1, presents highlights from the film.

Booklet – Julie Kirgo’s liner notes are sympathetic to all involved in the production, with Kirgo praising what worked best while simultaneously wondering how much better it could have been. The booklet also includes production stills and a reproduction of the film’s poster art.

Let’s Make Love is not the greatest film from star Marilyn Monroe and director George Cukor, but has some worthwhile moments, including some very amusing celebrity cameos. While the transfer is not as impressive as some other recent releases of Fox classics, and while the bonus features are on the lighter side, this is still a quality presentation that should delight fans of Monroe.

I just saw this film for the first time this summer.

What’d you think of it? It was new to me too, actually.

Josh Steinberg said:
What’d you think of it? It was new to me too, actually.
Click to expand...

It was good! Not one of the best but still a good movie. My wife had never seen it either and we both agreed we would watch it again in the future.

I felt it was entertaining too.
The others thread also made me curious about her unfinished film and the footage. I finally watched that online too. Such a shame it wasn’t completed as the footage was very promising!! She looked in fantastic shape too!!

Another take on it...

Anybody seen the UK blu-ray of Let's Make Love on Signal One Entertainment?
You must log in or register to reply here. 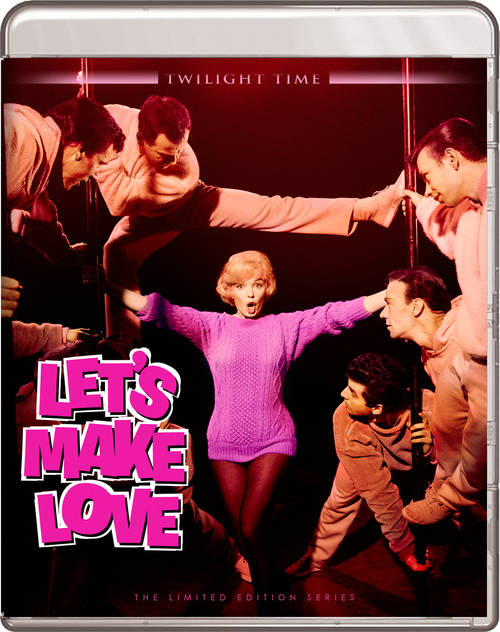