Forum List What's new Dark Style Change width
Log in Register
What's new Search
Menu
Log in
Register
Navigation
Install the app
More options
Dark Style
Close Menu
Posted on July 12, 2016 by Matt Hough
You are using an out of date browser. It may not display this or other websites correctly.
You should upgrade or use an alternative browser.
Entertaining feature film culled from a failed television series 3 Stars

The Legend of Custer proves itself to be a worthy western adventure, and this extended pilot movie in feature film form suggests the series might have had more to offer than its measly three-month run suggests.

In 1967, ABC experimented with a television series about the post-Civil War career of George Armstrong Custer, but the series didn’t catch on and only lasted three months. In 1968, Fox released The Legend of Custer, a feature film culled from the pilot and bits of another episode of the canceled series. As history, it isn’t of much use, of course, but there’s impressive action and some inventive camera moves to be seen in this long ago failure, and performances are solid from its appealing star through a handful of familiar faces in supporting roles.

Demoted from the rank of Major General due to some insubordination after the Civil War, Lieutenant Colonel George Armstrong Custer (Wayne Maunder) in 1868 is assigned to Fort Hays to head the 7th Cavalry, a clean-up and maintenance regiment inside the fort. General Alfred Terry (Robert F. Simon) never lets Custer forget that it’s his arrogance and headstrong demeanor that has brought him to his lowly post instead of commanding a troop of fighting cavalry like his nemesis from the old West Point days Captain Marcus A. Reno (Alex Davion). Custer does have his supporters inside the fort: old cavalry scout California Joe Milner (Slim Pickens), amenable Irishman Captain Myles Keogh (Grant Woods), and Sergeant James Bustard (Peter Palmer), but with the Sioux, the Kiowa, and the Blackfoot Indians on the warpath and Crazy Horse (Michael Dante) swearing vengeance against Custer, the hotheaded colonel is not going to sit around the fort training his ragtag group of recruits on the ins and outs of latrine duty.

The cobbled together script is by Samuel A. Peeples and Simon Wincelberg, and the writers have made sure that their central character is allowed to show the arrogance and bravado that made his reputation, both good and bad. He engages in fistfights and knife fights (a really well-staged one with Crazy Horse in the middle of the film), shows his dexterity with a sword and on horseback (making mincemeat of an obstacle course when one of the enlisted men complains that the officers couldn’t successfully complete it), and is shown to be cool and thoughtful under pressure instead of the hotheaded rapscallion of legend. The central set-up for the film’s climactic face-off between the soldiers and the various Indian tribes involves a merchant William Tymen (William Mims) who sells high powered rifles to the Indians, rifles that have a thirty-to-thirty-five meter range, weapons the Army does not know the Indians are in possession of. In between that storyline comes a scouting mission in which Custer is separated from his men in an avalanche (some impressive camerawork), saves Crazy Horse from the Blackfoot who have captured him, and then attempts to get back to Fort Hays while surviving a hostile wilderness with no food and filled with rattlesnakes, rocky, crumbling precipices, and torrential rivers. All of these events are handled in sturdy fashion by directors Norman Foster and Sam Wanamaker with wonderfully staged attacks (that climactic ambush by the Indians cutting off the 5th Cavalry with Custer and his rambunctious 7th riding to the rescue is impressive for a television series and seems quite film-like).

Wayne Maunder is all one could ask for as the young Custer: willful and stubborn to be sure, vain enough without it being off-putting (he can back up his braggadocio with his fists and his combat expertise), a born leader, and blessed with the ability to show s sense of humor when the situation merits it. Robert F. Simon plays General Terry alternating a slow burn with a fiery temper due to Custer’s continual insubordination. Michael Dante is a charismatic Crazy Horse, not quick to forgive the white man’s injustices even though Custer himself proves himself a worthy adversary and a man of his word. Grant Woods and Peter Palmer play Custer allies with a fine balance of respect and amusement while Slim Pickens brings his usual drawling down home flavor to the role of California Joe. Mary Ann Mobley pops up as a potential love interest Ann Landry, but she’s basically wasted in a nothing part as Custer is seldom around the fort long enough to engage in romance.

The film’s original television aspect ratio of 1.33:1 is replicated here, but the transfer zooms to 1.66:1 with no appreciable loss of information and becomes much more film-like. Sharpness varies from average to slightly above, and color values are all over the map, often appearing washed out and wan but occasionally displaying some vibrant reds and blues with decent skin tones. There are the usual age-related problems with dust specks, scratches, and debris, and there are interlacing artifacts, too, that occasionally give the image a distinct digital appearance. The film has been divided into chapters every ten minutes so this film has 10 chapters.

The Dolby Digital 2.0 sound mix is decoded by Dolby Prologic into the center channel. Despite some low level hiss that is constantly present, the dialogue is always understandable and is never overpowered by the background music of Richard Markowitz, Joseph Mullendore, and Leith Stevens or the atmospheric effects which have good fidelity for their age and the TV-era budget.

There are no bonus features with this made-on-demand disc.

Doomed by its placement on ABC’s 1967 fall schedule by being slotted opposite a far more popular western NBC’s The Virginian, The Legend of Custer nevertheless proves itself to be a worthy western adventure, and this extended pilot film suggests the series might have had more to offer than its measly three-month run suggests.

Matt, as a service to any reader who might happen to view only this review, without viewing any other threads on this form (which seems like a longshot), we should point out that the *entire* TV series has been released by Timeless, currently available as a WalMart exclusive (under $20.00).

Also, the WalMart exclusive will be ending, I believe sooner than later, at which point the Timeless release will be (more) widely available, with probably not too much of a price increase (indeed, if any at all).
You must log in or register to reply here. 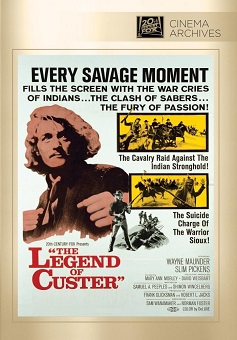