I wish it had been better 2 Stars

Legend’s Kray twins arrive on Blu-ray, with an edition that looks great, but is as lost in London as the filmmakers.

Legend is the latest cinematic retelling of the story of Ronnie and Reggie Kray, the gangster twins who were both famous and infamous throughout London in the 1950s and 1960s.   It has several inherent advantages – from writer/director Brian Helgeland (he adapted James Ellroy’s L.A. Confidential into the 1997 film) to Tom Hardy in a dual role as both of the twins. It’s also quite a beautiful film, given that it’s presenting an image of bleak, urban London of 50 years ago or more.   But something has gone sadly wrong here in both Helgeland and Hardy’s approach to this story. On a writing and directing level, the story never comes together, and an attempt to frame the story through the eyes of Reggie’s girlfriend Frances (Emily Browning) really doesn’t help the situation much.   On a performance level, Hardy’s work as both of the twins is simultaneously bracing and incoherent.   Hardy and the makeup team are able to differentiate the twins so that Reggie and Ronnie are easily distinct from each other – but Hardy’s delivery of the clipped cockney dialogue is so muffled and obtuse that it is extremely difficult to understand much of what he is saying for most of the movie.   Put the problems together, and you have a situation where a great-looking period crime drama is undone by its most basic elements.

SPOILERS:   The legend of the Kray twins is not a new one, and it isn’t new to the cinema.   This story has been repeatedly told, most memorably in Peter Medak’s 1990 film, The Krays. And there’s a great story to be told, in that the twins were both the most notorious gangsters of London in the 50s and 60s and simultaneously popular figures who had Frank Sinatra and Judy Garland at their club.   With this film, Brian Helgeland has had an opportunity even Medak didn’t – in that both men were alive and still plotting crimes behind bars in 1990. By 1995, Ronnie Kray had died, and by 2000, both men were gone.   It is possible now to do a full accounting of their history, from their early days to the second half of their lives, spent behind bars without parole from 1968 on.   There any number of interesting movies that could be made about the twins – about how long they got away with violence as a way of life, about how they continued their enterprises even when they had been behind bars for nearly 20 years. There’s a take on this story that could go along the lines of Scarface, and another that could rival The Godfather.   And yet Helgeland has chosen only to do a brief travelogue of the last several years of the Krays’ heyday before their final return to prison.   He has found a few flashes of interesting material, particularly in the certifiable madness of Ronnie Kray, but nothing that makes this story particularly compelling. Even the focus on Reggie’s girlfriend (and later, wife) Frances doesn’t help matters that much, as she simply doesn’t play enough of a part in the central events of the movie. And this is another lost opportunity. (AGAIN – SPOILERS!) The movie presents Frances’ death as a suicide following Reggie’s assault on her, something that goes completely against the grain of the character established through the entire preceding 90 minutes.   In reality, there is testimony that in fact she didn’t kill herself, and that Reggie confessed in prison that Ronnie admitted he’d killed her. Which would make for a far more interesting story. As it is, we only get to see bits and pieces of what the Krays do in their criminal organization. We see a meeting of their British “Firm” where the guys argue over strategy. We see a meeting with an American mobster (Chazz Palminteri, natch). And in perfunctory fashion, we see Ronnie and Reggie commit the two murders that will get them sent to prison forever. But we never get a sense of a solid throughline tying everything together. Even the device of Frances’ narration doesn’t really do it. For a writer/director who’s pulled larger canvasses together in the past, it’s frankly disappointing to see Helgeland lose the thread of this story.

SPOILERS DONE: Adding to the trouble is the heavily accented dialogue.   This is primarily an issue with Tom Hardy’s performance as both Krays, but it affects nearly everyone else in the cast.   It’s understandable why a British story being performed by a British cast in London could have this issue, but Helgeland isn’t British. The accents are likely quite authentic, but the result for an American ear isn’t the accuracy that was clearly being sought. Instead, too much of the dialogue is simply incomprehensible – it’s either mumbled in low tones or is too heavily flavored, so to speak.   For myself, I was repeatedly compelled to turn the subtitles on, something that rarely happens.   And this repeatedly pulled me out of the story, as I imagine it will do for any non-Londoner trying to watch it. (I suppose we could argue that this is a deliberate Brechtian device to aid in distancing the audience from the story and reminding them they are simply watching a movie. But my instincts tell me it’s more likely that they were enjoying the accents on set and didn’t realize that many people at home would have a lot of trouble understanding them.)

Legend was released to home theater viewers on March 1st.  The packaging here includes just the Blu-ray edition of the movie.   The film gets a lovely picture and sound presentation (albeit with incomprehensible dialogue), a commentary from Brian Helgleland and an 11 minute featurette. Instructions for downloading a digital copy of the movie are included on an insert in the packaging.

Legend is presented in a 2.40:1 1080p AVC transfer (avg 30 mbps) that does a great job of transporting the viewer back to 1960s London, in all its soot and grime.   The high level of detail being shown includes the mounting numbers of scars on the principle characters throughout, as well as the difference in opulence from the twins’ swanky club to their parents’ plain household. There is some CGI used here, but it’s mostly seamless – it’s clear they have massaged the shots where we see two Tom Hardys but they’ve buried the lines in such a way that it’s possible to forget that the same actor is in two places at once.

Legend is presented in an English DTS-HD Master Audio 7.1 mix (avg 3.5 mbps, going up to 6.5 mbps for the bigger club scenes). One would think that the mix would be a bit more immersive than it really is, to be honest. Much of the mix is sitting in the front speakers with the dialogue, which has the problems we’ve discussed above. I’m not counting too much off for this, given that this was an intentional effect, but there’s no way I can give any better of a score to a mix where the subtitle track is repeatedly needed. There are also DTS 5.1 mixes available in Spanish and French and an English DVS 2.0 track.

The Blu-ray of Legend comes with just two bonus features. One is a commentary with Brian Helgeland and the other is a pretty fluffy featurette that comes in just above 10 minutes long.

Feature Commentary with Writer/Director Brian Helgeland – Brian Helgeland provides a scene-specific commentary, discussing everything from the real history of the Krays to his staging decisions.   The discussion goes back and forth between the production details of this film and the story being told. For people interested in Helgeland’s work in general, or in the details of the Krays’ history, this will be an interesting listen.

Creating The Legend (11:03, 1080p) – This one featurette is the only other bonus feature on the Blu-ray. It mostly consists of the usual film clips, on-set video bits, and brief excerpts from EPK interviews of Tom Hardy and Brian Helgeland, among others.

Legend is sadly not the brutal gangster epic one would have hoped to see, given the talents of writer/director Brian Helgeland and actor Tom Hardy. While it’s beautiful to look at, the disparate parts never really come together and the unintelligible dialogue makes it a chore to try to follow what everyone is saying to each other.   The Blu-ray presents the movie in solid high definition picture and a 7.1 sound mix that frankly doesn’t feel any more effective than a 5.1 mix.   A commentary and a short featurette are the only special features.   Granted, the commentary is interesting – particularly if you’re already a fan of Brian Helgeland. 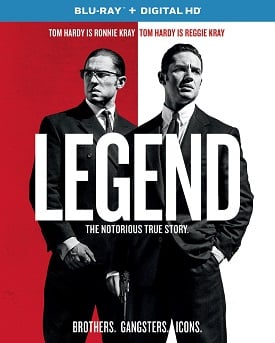