Reasonably entertaining and with a charming star turn by Robert Redford, Ivan Reitman’s Legal Eagles doesn’t live up to the sum of its parts, but the mystery has its minor moments of interest, and the handsome production and New York location work offer additional compensations.

A lightweight romantic mystery that trades on its star power at the expense of its narrative, Ivan Reitman’s Legal Eagles could have been far better than it is but gets by with its effortlessly charming leading man, two female co-stars with quite differing allure, and a top notch production. Set in the world of art theft, Legal Eagles’ messy script is most definitely its Achilles’ heel, but some spectacularly staged set pieces and a great cast of supporting character actors offer adequate compensation for the screenplay’s lapses.

Assistant District Attorney Tom Logan (Robert Bedford) is set for higher office, at least until he becomes involved with struggling defense lawyer Laura Kelly (Debra Winger) and her unpredictable, enigmatic client Chelsea Deardon (Daryl Hannah). It seems the least of Chelsea’s crimes is the theft of a very valuable painting she claims is rightfully hers, but as the women persuade Logan to investigate further and to cut some official corners after being presented with a thick file of evidence by Detective Cavanaugh (Brian Dennehy), Tom begins to believe that Chelsea’s father’s murder back in the day has a longer and wider reach presently than anyone has suspected. When bodies begin dropping, Chelsea is subsequently accused not just of theft but also of murder.

The screenplay by Jim Cash and Jack Epps Jr. had possibilities for an excellent murder mystery, but the writers make their narrative unnecessarily convoluted and have their characters exhibit behaviors which seem definitely out of character (an obvious seduction of Tom by Chelsea is irritatingly nonsensical). With the suave Redford (though he’s made klutzy here) and the quirky Winger (who’s klutzy and occasionally shady) as the focus of the film, the charm factor is a given (observe a completely unnecessary but nevertheless entertaining scene as both protagonists struggle alternately with insomnia), and director Ivan Reitman lets the two actors have their heads, especially Redford who also helms a decidedly off-the-wall opening argument in the courtroom in which he turns the tables on the prosecution with a completely novel approach. The picture begins and ends with huge fire sequences, impressive in their size and scope and also features a couple of chases through real Manhattan locations and a wild car drive with Winger’s Laura behind the wheel, wild because the character does not know how to drive. Reitman also sets up a very vivid performance art piece which Chelsea presents that again stretches the film’s running time unnecessarily close to two hours.

Robert Redford appears to be having the time of his life shuffling through this picture (literally and figuratively). He’s impressive and charismatic in court, he has rapport with both leading ladies, and despite his character’s occasional absent-mindedness and goofiness, he proves to be a fine man of action, too. Neither of the ladies gets such cavalier treatment from the director. Debra Winger is plucky enough (but Holly Hunter would have been pluckier and more sensual), and Daryl Hannah does lots of mystifying things that always keep her character’s motives in doubt. But the jewels in the cast are in the supporting ranks: Steven Hill’s waffling District Attorney, Brian Dennehy’s dominating detective, Terence Stamp’s smarmily suspicious gallery owner, John McMartin’s angry partner, and David Clennon’s unctuous rival for Tom’s job. Also around are the young Christine Baranski as Tom’s assistant, Sara Botsford as Tom’s bitter ex-wife, and Roscoe Lee Browne as the trial judge.

The film’s original 2.35:1 theatrical aspect ratio is faithfully rendered in this 1080p transfer using the AVC codec. Most of the film offers excellent sharpness and very good color rendering. There is some brief flickering, and black levels aren’t always at their inkiest. Grain levels seem to fluctuate a bit, too, though it isn’t particularly burdensome. The movie has been divided into 8 chapters.

The DTS-HD Master Audio 2.0 stereo surround track is up and down in quality. Through some of the film, it seems mono only with just occasional activity across the front soundstage, but the performance art piece that Chelsea conducts really makes the surrounds come alive with voice and sound effects happening in all corners of the soundstage. Dialogue has been well recorded, and mixed with Elmer Bernstein’s engaging score and sound effects which feature several fires and some fairly hefty explosions, the audio track does indeed have its moments of splendor.

Kino Trailers: Once Upon a Crime, The Woman in Red, Blame It on Rio.

Reasonably entertaining and with a charming star turn by Robert Redford, Ivan Reitman’s Legal Eagles doesn’t live up to the sum of its parts, but the mystery has its minor moments of interest, and the handsome production and New York location work offer additional compensations for its undernourished script. 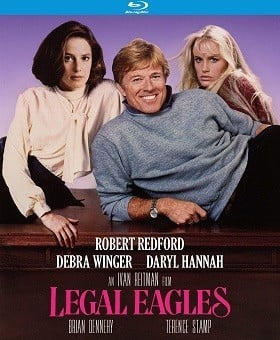