Forum List What's new Dark Style Change width
Log in Register
What's new Search
Menu
Log in
Register
Navigation
Install the app
More options
Dark Style
Close Menu
Posted on October 28, 2017 by Richard Gallagher
You are using an out of date browser. It may not display this or other websites correctly.
You should upgrade or use an alternative browser.
Entertaining, thoughtful and violent adult western 4.5 Stars

Lawman is an intelligent and violent adult western that features outstanding performances by Burt Lancaster and Robert Ryan. It has been brought to Blu-ray by Twilight Time with a very nice transfer from MGM.

I’m a lawman. You know what a lawman is, Crowe? He’s a killer of men. – Jered Maddox

Lawman is an intelligent and violent adult western that features outstanding performances by Burt Lancaster and Robert Ryan. It has been brought to Blu-ray by Twilight Time with a very nice transfer from MGM.

Burt Lancaster and Robert Ryan were contemporaneous Hollywood stars for twenty years before they first appeared together in The Professionals in 1966. They reunited in 1971 for Michael Winner’s Lawman, a truly unusual western in that it does not have a single principal character that could be regarded as a villain. That, however, does not mean that there is any shortage of gun play.

The film opens in Bannock, Texas, where one evening a group of drunken cowhands decide to shoot up the town, accidentally and unknowingly killing an old man. They work for rancher Vincent Bronson (Lee J. Cobb), a basically decent man who owns a large spread in Sabbath, Texas and essentially runs the town. Three months after the incident in Bannock, Marshal Jered Maddox (Burt Lancaster) arrives in Sabbath with a dead body draped across a horse. The deceased is one of the men who shot up Bannock, and Maddox is there to bring the rest of the culprits in to be tried.

Maddox expects to get some help from the Marshal in Sabbath, Cotton Ryan (Robert Ryan), who quickly disabuses him of that notion. Sabbath is a peaceful town and Ryan, whose best years are behind him, owes his job to Vincent Bronson. “You carry the law,” protests Maddox. Ryan chuckles. “I carry nothing,” he replies. Pointing at his desk he explains, “I sit there ’cause Bronson says sit. I’ve been paid for, Maddox.”

Ryan rides out to Bronson’s ranch to report on his meeting with Maddox. The rancher wants to avoid any trouble and instructs his Marshal to tell Maddox that he is willing to pay for the damages and provide compensation for the death of the old man. In the meantime Maddox is visited at his hotel by an old flame, Laura Shelby (Sheree North). They haven’t seen each other in ten years, and she is now living with Hurd Price (J.D. Cannon), one of the men Maddox is after. She explains that Hurd never shot anyone, but Maddox says that he has to stand trial with the rest of the men. He advises Laura to tell Hurd to give himself up, promising that he will not be hurt if he surrenders peacefully.

Bronson gathers his men together to discuss how they should respond. His right-hand man, Harvey Stenbaugh (Albert Salmi), wants to stand up to Maddox. Vern Adams (Robert Duvall), who has a small ranch of his own, plans to sit tight and will confront Maddox only if the lawman comes after him. Bronson instruct Stenbaugh and a young cowhand named Crowe (Richard Jordan) to ride into Sabbath in the morning and learn from Ryan if Maddox is willing to deal. “Keep clear of Maddox,” he warns.

Maddox is unmoved when Ryan tells him about Bronson’s proposition. As Maddox sees it, his job is to bring in the troublemakers, and that is what he intends to do. “There will be some dying,” cautions Ryan. “It’ll be their doing,” Maddox responds coldly. In the meantime, some of Sabbath’s leading citizens, who resent and fear Maddox’s presence, consider taking matters into their own hands. The tension builds and leads to a shattering climax.

Lancaster and Ryan are terrific as two aging lawmen who find themselves in diametrically opposite positions. Cotton Ryan takes a reasonable approach. The death of the old man was an accident, so why not resolve it amicably? But Maddox is stubborn to the point of arrogance. “You never did give much away,” Laura reproaches him.

Michael Winner, the British director who would go on to fame making films starring Charles Bronson, reportedly pulled off a coup by making a deal to film Lawman in Durango, Mexico. It seems that Howard Hawks wanted to make Rio Lobo in Durango, but Winner beat him to it. Lancaster got along well with the young director, describing him as “sharp, bold, without respect for convention.” For his part, Winner always addressed Burt as “sir,” partly out of respect and partly, he said, “because he’s one of the few actors who’s ever paid for dinner while I’ve been around.”

The director keeps the action moving along without any lulls. The one distraction is the excessive use of zoom shots, a style which was popular in the seventies but thankfully is no longer in vogue. That caveat aside, Lawman is an exciting, thought-provoking western which boasts wonderful performances by two of Hollywood’s great movie stars, and it is highly recommended.

Lawman comes to Blu-ray with a very nice high-definition transfer. The 1080p image is framed at 1.85:1 and is delivered via the AVC codec. It is reasonably sharp and is entirely free of age-related damage. Colors are accurate but a bit muted, which appears to be by design because it helps to convey the dusty nature of west Texas. The location filming in Mexico by cinematographer Robert Paynter heightens the film’s sense of realism.

The English 1.0 DTS-HD MA soundtrack is fine and delivers some surprising punch in the many scenes which involve gunfire. Dialogue is clear and understandable and the musical score by Jerry Fielding is delivered without distortion.

The extras on this Blu-ray disc include the film’s theatrical trailer and an isolated music track. The trailer is soft but otherwise is in good shape. I recommend watching the feature first because the trailer contains spoilers.

The enclosed booklet contains a typically insightful and informative essay about the film by Julie Kirgo.

Lawman is being released in a limited edition of 3,000 copies, so readers who are interested in purchasing it should go to the Twilight Time website or the Screen Archives website and confirm that copies are still available. You will not regret it.

Thanks, Rich. Another nice offering from TT. Great lead actors and a western make for an unbeatable combination.

There actually is some distortion to the score towards the end of the film, but it may be inherent to the source...I honestly do not remember whether or not the DVD also had the same issue. I think the film looks very good - it's a great motion picture -the teaming of Burt Lancaster, Lee Jay Cobb, Michael Winner and that wonderful score by Jerry Fielding really separate the film from other westerns. If I have one caveat - I believe that the German version of the film (and the bluray released there) do run longer than the cut we got here.

Another great performance by the very underrated Robert Ryan. He almost steals this movie from Lancaster.

I have really tried to like this over the years. Decent script and good performances let down by Michael Winner's clunky direction. Every time I think about putting it on I run The Professionals instead. Now there is a film that needs a UHD release.

Keith Cobby said:
I have really tried to like this over the years. Decent script and good performances let down by Michael Winner's clunky direction. Every time I think about putting it on I run The Professionals instead. Now there is a film that needs a UHD release.
Click to expand...

How nice would that be! - I'd also add Sam Peckinpah's THE WILD BUNCH...both films I'd kill to see a UHD of
You must log in or register to reply here. 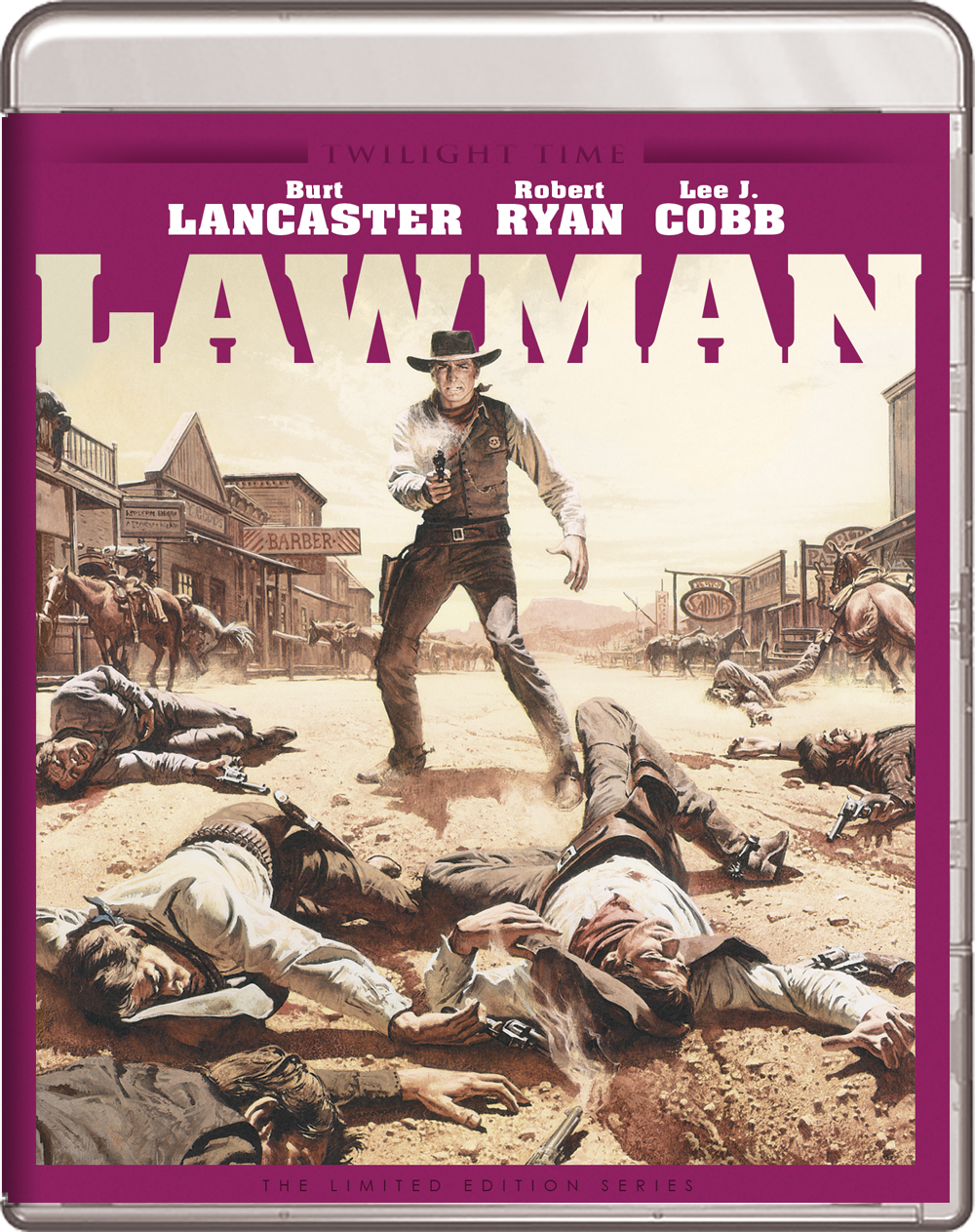