A solid crime drama of its era, The Laughing Policeman features excellent performances from Walter Matthau and Bruce Dern in an atmospheric production which vividly brings back memories of the 1970s.

After the major commercial successes of The French Connection and Dirty Harry, there occurred a proliferation of gritty urban crime dramas. Stuart Rosenberg’s The Laughing Policeman was one of many tough, violent pictures which premiered at this time, usually filled with outstanding actors and with scripts and direction that captured the seedy underbelly of city life. While the narrative for The Laughing Policeman has its problems, there’s certainly nothing wrong with the genuine ambiance established by the film’s first-rate production team.

An overcoat-clad gunman enters a San Francisco city bus and sprays bullets from a machine gun that kill eight people including the driver. When Detective Sergeant Jake Martin (Walter Matthau) investigates the shooting, he’s devastated to find his partner Evans (Anthony Costello) as one of the victims. Also on board was Gus Niles (Louis Guss), a man involved in one of Martin’s unsolved cases from two years earlier. Over the course of their investigation, Jake and his new partner Inspector Leo Larsen (Bruce Dern) finally figure out that Jake’s partner had been conducting his own private investigation into the old unsolved crime, a crime that will eventually point them to the mysterious identity of the deadly shooter.

Thomas Rickman’s screenplay and Stuart Rosenberg’s direction take a quasi-documentary approach to this criminal investigation with a host of detectives on the case (among them, detectives played by Louis Gossett Jr., Val Avery, Don Borisenko, and Anthony Zerbe) following all manner of leads, many of which lead them down blind alleys but which introduce into the film a terrific sense of time and place. We see a cross section of San Francisco of the early 1970s from its seedy strip clubs and gay bars, separate dance clubs featuring male and female dancers, pimps and hookers, and gambling parlors to greasy spoon eateries, the county jail, and Hare Krishnas on every corner. There are unnecessary detours, too, to show us Jake’s unhappy home life (sleeping in the den apart from his wife, estranged from his kids) and street scenes where pimps and hookers are hassled and a standoff with another random shooter which offers a vivid sequence of police bravery in the face of a nameless, faceless gunman, all of which add to the film’s brutal but realistic atmosphere but which don’t do anything to advance the case and make the film run longer than it needs to. The violence level, like it was for many of the films in the decade following the elimination of the Production Code, leaves very little to the imagination, again giving a toughness and kinetic jolt to the movie with never a thought for sparing the audience from any visceral depiction of thoughtless violence. There is also the almost mandatory San Francisco car chase sequence, but, naturally, after Bullitt, most of them seem like so much tepid water.

Walter Matthau eschews comedy here for a straight dramatic role that he plays to perfection even if the part seems more ambitious (with the forlorn domestic situation touched on but completely thrown away) on the page than on the stage. Bruce Dern gets a rare above-the-title role that is quite off-putting in the early going and never quite earns our complete trust with his typical era-prejudices often coming to the fore but certainly a vivid characterization complete with handlebar mustache and cowboy boots. Matthau and Dern have a shouting match in the police garage near the end of the movie that is the best sequence in the picture and certainly shows two actors at the top of their respective games. Anthony Zerbe is the stereotypical demanding precinct lieutenant, and Louis Gossett Jr. in an early role shows the charisma and power that would in the decade ahead bring him both an Emmy and an Oscar. Cathy Lee Crosby as the girl friend of Martin’s slain partner has the richest of the three primary women’s roles, but that’s not saying much. Like so many 1970s films, the women’s roles were decidedly secondary. Mario Gallo has an entertaining couple of scenes as a twitchy street snitch, and Paul Koslo as a drug pusher and Albert Paulsen in a wordless performance as a key component to the solution of the mystery also make more than decent showings.

The film’s original theatrical aspect ratio of 1.85:1 is faithfully rendered in this 1080p transfer using the AVC codec. There may be a bit of color fading in certain scenes (though that may have been deliberate in the original photography by David Walsh and subsequent color timing; the film does appear much as I remember it from the theater) though various hues and skin tones can also be realistic most of the time, and the erratic use of contrast leaves some scenes looking milky and indistinct with sharpness sometimes not as solid as in other sequences. Black levels also aren’t at reference levels. The movie has been divided into 8 chapters.

The DTS-HD Master Audio 2.0 mono sound mix is very typical of its era with the dialogue securely recorded and presented, well mixed with the very spare background music score by Charles Fox and atmospheric effects which don’t have enormous amounts of punch (the gunshots, the car chase) but which get the job done. Engineers have removed any problems with age-related artifacts like hiss, crackle, or flutter.

Audio Commentary: film historians Lee Pfeiffer, Eddy Friedfeld, and Paul Scrabo have an interesting conversation about the film which acknowledges both its strengths and weaknesses even if comments become fewer and farther between as the lengthy film runs.

Paul Koslo Interview (8:28, HD): the actor who plays drug pusher Duane Haygood in the movie shares memories of working on his scenes and his friendship with Walter Matthau.

Image Gallery (2:00, HD): posters and stills for the movie are presented in montage fashion.

Promo Trailers (HD): The Taking of Pelham 1, 2, 3, Report to the Commissioner, Busting, Fuzz.

A solid crime drama of its era, The Laughing Policeman features excellent performances from Walter Matthau and Bruce Dern in an atmospheric production which vividly brings back memories of the 1970s.

One of my favorite 70’s cop movies. The opening sequence aboard the bus is jarring, especially for the 70’s, and all the performances are great. In my book, Mattheau knocked it out of the park, as a very difficult to like character. For much of the movie his portrayal is bordering on misanthropic, but he softens a bit later. Bruce Dern is his usual great self, and other performances as mentioned are solid. Highly recommended from me.
You must log in or register to reply here. 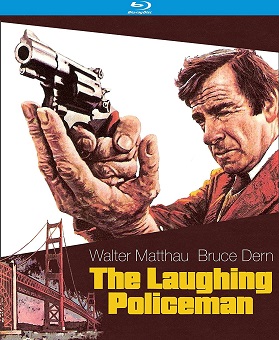