Predictable dramedy with a strong performance by Shirley MacLaine 3 Stars

An octogenarian forges a new family for herself in her waning days in Mark Pellington’s The Last Word, an adept if predictable comedy-drama that brings the always welcome Shirley MacLaine back to feature film prominence.

An octogenarian forges a new family for herself in her waning days in Mark Pellington’s The Last Word, an adept if predictable comedy-drama that brings the always welcome Shirley MacLaine back to feature film prominence. She’s playing a familiar role here, and there aren’t many surprises along the way, but the film is earnestly produced and directed, and it’s certainly a pleasant way to spend not quite two hours.

Opinionated, hard-driving, and demanding Harriet Lauler (Shirley MacLaine) has in her eighty-one years alienated just about everyone who ever meant anything to her including an ex-husband (Philip Baker Hall) and a daughter (Anne Heche), so with an empty life yawning before her, she attempts suicide but is rescued in the nick of time. As she contemplates what her obituary might have said given her lack of anyone with a kind thing to say about her, she tasks newspaper obituary writer Anne Sherman (Amanda Seyfried) to write her obit ahead of time and is determined to accomplish some things in her remaining time on Earth that would make worthy copy for her death notice. She begins mentoring young Brenda (AnnJewel Lee Dixon) from the community center, and, after being alerted to an FM radio station that plays an eclectic mix of rock and soul that she likes, becomes the morning radio DJ for the station. But Harriet has other tricks up her sleeve including giving the rather aimless Anne some help in both her professional and personal life and making amends with Joe Mueller (Joel Murray) who works at the advertising agency she once controlled. She has some bridges to rebuild in her own life as well as she, Anne, and little Brenda become a close knit family she hasn’t ever experienced before.

Once we get to know Harriet in all her eccentricity and oddness (diagnosed by her daughter late in the film as OCD), the events that play out in the remainder of Stuart Ross Fink’s screenplay are pretty easy to forecast: Harriet plays matchmaker for Anne and afternoon DJ Robin Sands (Thomas Sadoski) even to the point of inserting herself obnoxiously into their first date and later pushing Anne to break free of her job at the newspaper and explore other avenues as a writer. It’s fairly absurd that Harriet is an expert in almost all things (you half expect her to haul out a tool kit and fix their car that breaks down during a road trip which the three of them undertake, but we are at least spared this), but it has to be that way for the rest of the film’s narrative to fall into place. With Anne being an obituary writer, it’s not surprising when the film ends as it does, and it’s also not surprising that Harriet has the final word in their lives as the movie fades to black. Director Mark Pellington moves things along at a steady pace and even manages to capture one gorgeous shot in the film as the three chums take a moonlight stroll and arrive at a glistening lake in the dead of night and decide to take a swim. With Harriet’s love of jazz, blues, and rock from the 1950s, 1960s, and 1970s (a preference which she shares with both Anne and Robin), we get a steady diet of that music on the soundtrack to accompany the various excursions of the main characters. It’s all fairly cookie cutter in concept but nevertheless pleasurable in the presentation.

Shirley MacLaine has played a lot of these controlling, manipulative women in the latter part of her career witnessed by her performances in Terms of Endearment, Guarding Tess, Postcards from the Edge, and Madame Sousatzka, and she’s just as effective here as she was in those earlier endeavors though the character can be exasperating (especially in that date night encounter with Robin and Anne) and sometimes wears on the nerves. Amanda Seyfried does what she can with an underwritten part though her hot and cold attitude toward Harriet isn’t well sustained in the script. AnnJewel Lee Dixon as the potty-mouthed nine-year old Brenda is pretty much the standard movie urban hip kid. Thomas Sadoski as Anne’s love interest and Tom Everett Scott as her editor at the newspaper do what they can with limited material. Also making interesting characters out of practically nothing are Anne Heche as Harriet’s damaged daughter who’s a mirror image of her agitated mother, Philip Baker Hall as the laid back ex-husband, and Steven Culp as Anne’s concerned father.

The film’s 2.40:1 original theatrical aspect ratio is faithfully rendered in 1080p resolution using the AVC codec. Sharpness is quite something throughout as we get numerous close-ups of the stars’ faces in order to study facial features and hair. Color is deftly handled and always true to life with especially believable skin tones. Black levels are really excellent, and contrast has been consistently applied for a first-rate image. The movie has been divided into 20 chapters.

The DTS-HD Master Audio 5.1 sound mix gets most of its surround activity from the rich selection of blues and jazz standards which play throughout the film along with occasional original background score from Nathan Matthew David. Otherwise, there isn’t much surround activity in the rear channels while the front channel holds the extensive dialogue in the movie which has been excellently recorded.

Promo Trailers (HD): Before I Fall, Paterson, Fifty Shades Darker, The Resurrection of Gavin Stone, My Life as a Zucchini, among others.

While sporting nothing especially new or fresh, The Last Word nevertheless offers some excellent performances and a most welcome return to the screen for Shirley MacLaine. Outstanding visuals also make this a likely rental for those interested in the stars or story.

Your link to the review does not work.

Never mind.
Expand signature
Johnny
www.teamfurr.org
But a family cat is not replaceable like a wornout coat or a set of tires. Each new kitten becomes its own cat, and none is repeated. I am four cats old, measuring out my life in friends that have succeeded but not replaced one another.--Irving Townsend
You must log in or register to reply here.
Share:
Facebook Twitter Reddit Pinterest Tumblr WhatsApp Email Link 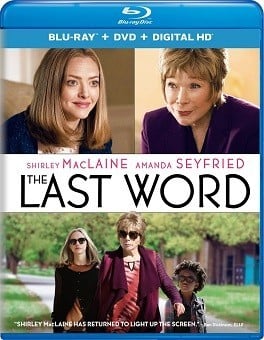