Director Paul Feig and co-writer Emma Thompson, along with a talented cast, try desperately to raise Last Christmas, inspired by the song composed by the late George Michael, beyond a typical Hallmark or Lifetime Christmas movie, and only succeed in making it feel like all they had was a bigger budget to work with.

Kate (Emila Clarke) immigrated to London with her mother (Emma Thompson), father (Boris Isakovic) and sister Marta (Lydia Leonard) from the former Yugoslavia nearly 20 years ago. She has been working as an Elf in an all-year Christmas decorations store for Santa (Michelle Yeoh), but ever since her “illness” she has been angry and self-destructive, moving from one friend’s home to another after being asked to leave for her behavior. Things begin to change one day when she meets Tom (Henry Golding), who begins taking her on walking tours of the city, urging her to “look up.” Kate begins to sense a connection with Tom as she continues to go on these walking tours, and even misses him when he frequently doesn’t show up for long periods of time. Kate senses something familiar yet mysterious about Tom, eventually figuring it out as she gets her life back together and organizes a holiday talent show at the local homeless shelter.

Taking George Michael’s popular Christmas song as inspiration, Emma Thompson and Bryony Kimmings (with some help from Greg Wise) have fashioned a romantic comedy that, unfortunately, feels too much like a much more expensive Hallmark, Lifetime, or even Netflix Christmas movie with a more impressive production design and familiar faces. If you have ever viewed any of the hundreds of holiday movies produced for those three outlets, Last Christmas is going to feel extremely familiar, but the twist that comes during the third act is both unexpected and comes almost out of nowhere. I kind of feel bad for director Paul Feig, who seems to have hit a rough patch since Ghostbusters. He does pull some great performances out of his cast, making a rather plain-looking Emila Clarke into a likeable yet self-destructive young woman who needs to work out some issues both with herself and her family. Emma Thompson is also terrific as the eccentric and very unhappy mother who misses being able to care for her two daughters who have left the nest. Henry Golding is a delight and very charming as the mysterious Tom. Michelle Yeoh is hilarious as the shopkeeper Santa (not her real name), an immigrant from China who loves the Christmas holiday just a little too much. Fans of George Michael will likely enjoy the several tunes, many from his deep catalog, that are interspersed throughout the film, plus a cameo by Wham! member Andrew Ridgeley.

Last Christmas was captured at 8K resolution on Panavision Millennium DXL cameras and completed as a 4K digital intermediate in the 2:1 aspect ratio. Universal has skipped a 4K physical release for this title (it is available digitally), opting instead for Blu-ray as the highest resolution physical format. This is a beautiful 1080p AVC-encoded transfer, with vivid colors that never appear oversaturated. Detail is exceptional, from facial features to the smallest tree ornaments in the shop. Contrast is unbelievably good, especially the many night time sequences that feature decorative Christmas lights.

Deleted/Alternate/Extended Scenes (1080p; 22:45): Director Paul Feig introduces this set of 15 various scenes left on the cutting room floor (without commentary) – Not Up To West End Standards – Extended, Tom Shows Kate the City, Kate Arrives at Jenna & Rufus’ Place, Kate Brings a Date Back, Kate Gets Kicked Out – Extended, Kate Has No Place to Go, Kate Lonely at the Bar, Kate is Late, Tom Does So Much Good, Kate Has an Audition, Kate Returns the Skates, Kate and Marta Fight – Alternate, Petra is Afraid – Extended, Kate at the Shelter – Extended and Tom Has Something To Say – Alternate.

Director in Vision (1080p; 1:51): Director Paul Feig introduces a brief collection of Behind the Scenes footage of himself on set.

It’s All So Cold (1080p; 2:00): The actors between takes complaining and braving the cold weather.

Try Not to Laugh (1080p; 6:04): Emilia Clarke and Emma Thompson come down with a case of the giggles during what is supposed to be a touching scene.

Love Letter to London (1080p; 3:36): Shooting on-location in London during the Christmas season.

Paul Feig Takes Over the Tram (1080p; 3:34): Paul Feig was a tour guide at Universal Studios back in the early 1980s, and interrupts a tour in progress.

Audio Commentary with Director Paul Feig: This is a slightly m ore technical track than the second one, with Feig discussing the film solo.

Audio Commentary with Director Paul Feig and Producer/Co-Writer Emma Thompson: This is a more lively track, with the two discussing the development of the film, changes made after test screenings, etc.

DVD Copy: The movie in 480p with Dolby Digital 5.1 audio, plus most of the special features listed above.

Last Christmas is nothing more than a big-budget Hallmark or Lifetime holiday-themed romantic comedy, although it tries to be something more than that. Performances are good, as is the presentation and most of the special features. 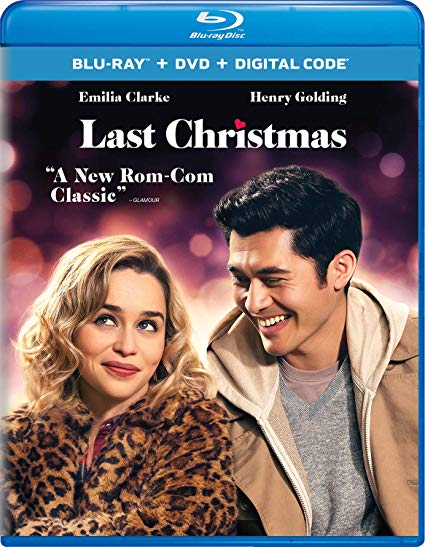