Forum List What's new Dark Style Change width
Log in Register
What's new Search
Menu
Log in
Register
Navigation
Install the app
More options
Dark Style
Close Menu
Posted on February 21, 2018 by Todd Erwin
You are using an out of date browser. It may not display this or other websites correctly.
You should upgrade or use an alternative browser.
One of the better video game adaptations 4.5 Stars

Adapting a popular video game into a movie is a genre that quite possibly has the lowest odds for success. Super Mario Bros. and just about any movie directed by Uwe Boll quickly come to mind as utter disasters. Every so often, though, Hollywood will produce a winner, just to prove that it can be done, if you get the right people involved. Lara Croft: Tomb Raider is one of those exceptions to the rule.

Lara Croft (Angelina Jolie) is an archeological “tomb raider,” in search of antiquities and enjoying the danger and perils of the hunt almost as much as acquiring the prize. She’s aided by her butler Hillary (Christopher Barrie) and tech wizard Bryce (Noah Taylor) at her mansion on England, setting up daring obstacle courses and training sessions within, including doing battle with a robot programmed to kill her at all costs.

The Illuminati have recruited Manfred Powell (Iain Glen) to fund and lead an expedition to find the three pieces of the “Triangle of Light” that must be assembled before a major planetary alignment which occurs every 5,000 years so that they can control time and space, and I assume take over the world. But Lara’s late father, Lord Richard Croft (Jon Voight), was in possession of the first piece, a clock that doubles as a key, and was able to hide it within Croft Mansion before his death. Lara discovers it on the first evening of the alignment after awakening from a dream, but Powell’s team of mercenaries invade the mansion and steal the clock. Powell has hired an adversary of Lara’s, archeologist Alex West (Daniel Craig) to assist him in locating the remaining pieces, and the globe-trekking hunt is on, with Lara hot on their trail to stop the Illuminati from reuniting the pieces and, I assume, again, take over the world (insert your own Pinky and the Brain reference here)!

Much like the plot of the film itself, the success of Lara Croft: Tomb Raider is due in large part to the alignment of talent involved. Producer Lawrence Gordon had a string of hits in the 1980s and throughout the 1990s, including Die Hard, Field of Dreams, The Rocketeer, Waterworld, 48 Hrs, etc. Simon West had proven himself a capable action director with Con Air three years earlier. Angelina Jolie had won a Best Supporting Actress Oscar for Girl, Interrupted and appeared in the thriller The Bone Collector and the chase-fest Gone in 60 Seconds. Gordon and West also assembled a terrific cast of mostly then-unknown actors, such as Iain Glen (Game of Thrones), Noah Taylor (Charlie and the Chocolate Factory), and Daniel Craig (the current James Bond). It is not a great movie by any means, but it does hark back to the old Saturday matinee serials on the 1940s, part of what made Raiders of the Lost Ark such a success.

Lara Croft: Tomb Raider was shot on film in the Super 35mm format and completed on 35mm film as well. Paramount has created an all-new 4K scan of the film for this UHD release, and it is a major improvement over previous home video releases. The new transfer and increased resolution allow for much more clarity in the overall image. Contrast gets a huge boost, thanks to the more modern transfer as well as the increased contrast ratio that high dynamic range (in this case, Dolby Vision) provides. Colors are more natural, as well.

As for the included 1080p Blu-ray, it is a good news, bad news situation, but I have not factored this into my video rating. Tomb Raider was one of Paramount’s first titles on the Blu-ray format, maxing out its BD25 disc with the film encoded at 1080p in MPEG2 with both lossy Dolby Digital 5.1 at 640kbps and DTS 5.1 at 1.5 Mbps, plus all of the special features ported over in 480i from the original DVD release. To add insult, the disc also included a promo for the new format, touting its increased picture and sound over DVD. The good news (despite using the exact same menu design) is that the movie on Blu-ray has been encoded in AVC at a much higher bitrate with a lossless DTS-HD MA 5.1 track and given more breathing room on a BD50. The bad news is that it appears to be encoded from the same 1080p master source as on the original Blu-ray release.

Lara Croft: Tomb Raider on 4K UHD Blu-ray (as well as its accompanying Blu-ray) contains an upgraded lossless DTS-HD MA 5.1 track from the lossy Dolby Digital and DTS tracks on the original Blu-ray release. Dynamic range is obviously improved upon here, but that’s about it. This has always been a rather loud mix, and unfortunately suffers from some of the minor issues that plagued the DTS mix from the original release. Song selections and sound effects often take priority over dialogue during some of the more heightened action sequences, but how many watch this movie (and its sequel) for the dialogue? While disappointing that a Dolby Atmos track was not created for this release, I’ll take this new lossless DTS-HD MA track over the older DTS and Dolby Digital any day.

Nearly all of the Special Features can be found on the re-encoded 1080p Blu-ray.

Audio Commentary with Director Simon West: The UHD disc contains only one special feature, and unfortunately Paramount likes to bury these commentary tracks in the Audio Selection sub-menu on their UHD releases when they are included. On the Blu-ray, the track can be selected from the Extras menu.

Digital Copy: An insert contains a code to redeem digital copies on both UltraViolet (via ParamountMovies.com) and on iTunes (via ParamountDigitalCopy.com).

If you are a fan of the film and are either 4K-ready or never made the leap from DVD, the upgrade here is a no-brainer with vastly improved video and modestly improved audio. 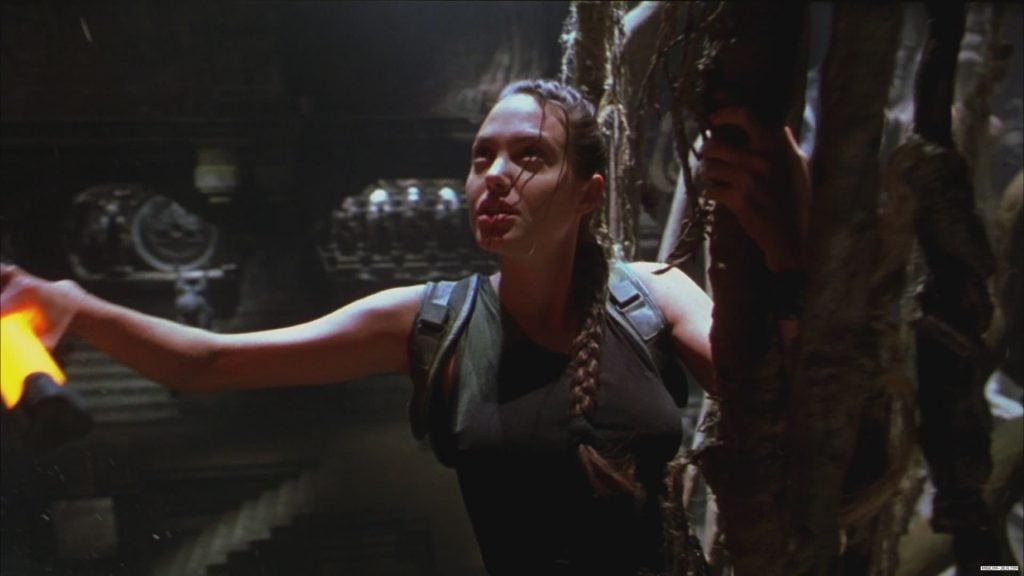 Great!
Thanks for the review!!!

"The bad news is that it appears to be encoded from the same 1080p master source as on the original Blu-ray release."

That was my guess as well - and a weird choice by Paramount since they're releasing the BD individually, too.

Why generate a new transfer and stick the BD with the same crummy old one? Does Paramount really think there are lots of "Tomb Raider" fans who'll buy 4K players just to watch that movie?

Colin Jacobson said:
"The bad news is that it appears to be encoded from the same 1080p master source as on the original Blu-ray release."

That was my guess as well - and a weird choice by Paramount since they're releasing the BD individually, too.

Why generate a new transfer and stick the BD with the same crummy old one? Does Paramount really think there are lots of "Tomb Raider" fans who'll buy 4K players just to watch that movie?
Click to expand...


The release has everything to do with the new film. A chance to see the Jolie ones again

I read that the UHd is a new transfer. The blu ray is an older one.

How does that make sense? They're screwing themselves and their customers by NOT including a new Blu-ray transfer with the 4K release.

dpippel said:
How does that make sense? They're screwing themselves and their customers by NOT including a new Blu-ray transfer with the 4K release.
Click to expand...

Osato said:
The release has everything to do with the new film. A chance to see the Jolie ones again

I read that the UHd is a new transfer. The blu ray is an older one.

I have the new 4K and BD, so I know what both look like. I also understand these releases exist as a tie-in to the new movie.

It does NOT make sense that Paramount would update the Blu-ray in some ways - such as changing from lossy to lossless audio - but still use the old transfer for the new BD.

The 2 transfers are clearly different - why not use the new transfer for the 2018 BD?

Other than as a method to push fans to buy 4K players, this doesn't make any sense - people who would buy the 2018 BD won't bother because it's not much of an upgrade...
You must log in or register to reply here.