Posted on February 21, 2016 by Matt Hough
Mad Max rip-off is cheesy in every way 2 Stars

A future world turns deadly for a man and woman searching for safety in Peter Maris’ Land of Doom.

A future world turns deadly for a man and woman searching for safety in Peter Maris’ Land of Doom. An unabashed rip-off of the Mad Max series of films without the rapid-fire pacing, incredible stunt work, or a charismatic actor in the lead, Land of Doom is embarrassingly inept in lots of ways. And, incredibly enough, the film is left open-ended for an obviously expected sequel which, thankfully, never materialized.

With the world slowly dying after some apocalyptic catastrophe, hordes of rampaging bandits on motorcycles plunder and pillage any remaining settlements while killing the men and raping the women before exterminating them. Loner female Harmony (Deborah Rennard) has somehow managed to avoid the fate of her fellow females when she stumbles upon an injured man named Anderson (Garrick Dowhen) who knows the whereabouts of a land of peace and prosperity called Blue Lake. She agrees to team up with him to insure their chances of making it to safety though Anderson eventually informs her he had once been a part of the renegade Raiders but had been put on their hit list by their leader Slater (Daniel Radell) when he tried to take over the group. Making their way through the hazardous territory, the two are accosted by Slater’s right-hand man Purvis (Frank Garret), cannibals, and plague-ridden nomads while trying to avoid capture.

There’s the germ of a promising scenario in Craig Rand’s screenplay (based on a novel by Peter Kotis), but everything about the film has been produced to ape the Mad Max films down to the leather-clad bikers (at one point, fingers even get sliced off as in The Road Warrior) and a series of chases on bikes and trucks and protagonist Anderson who wears a sawed-off shotgun in a holster. Peter Maris’ direction couldn’t be more maladroit with a character exclaiming that a man is dead while the victim is clearly breathing very hard and actors firing weapons that don’t spark or smoke but which produce a tremendous recoil (why did these shots stay in the finished film?). The many motorized chases in the film are almost ludicrous to watch as the vehicles appear to be going about two miles an hour, so that when Harmony is screaming that they need to go faster, one wonders why she doesn’t just hop off the cycle and run. To its credit, the movie has been filmed in a setting featuring some astounding rock formations (similar to the rock caves and caverns found in Arizona though supposedly this was shot in Turkey) that are captured brilliantly in several striking shots. There is some comic business added to the movie with an addled simpleton (Akut Duz) on a bicycle who makes friends with some miniature Ewok-like beings, and there are plenty of fight scenes (not well staged) and explosions for the action crowd, but all told, the movie is a juvenile mess.

Deborah Rennard, a familiar face from television, gets top billing as the combative Harmony. She looks like she just stepped off a wind-blown beach in Malibu to be in the film and does what she can with the risible dialogue, but she casts no sparks with leading man Garrick Dowhen (they do finally share a chaste kiss near movie’s end after she has spent the remainder of the film not allowing him to touch her). He has the right leading man credentials but can’t do much with the high school level drama which surrounds him. Daniel Radell tries his best to be eccentrically evil as Slater (clad in leather and a menacing face mask which we assume hides some terrible burns that weren’t in the makeup budget to create), but he’s not particularly threatening. Better as an antagonist is Frank Garret’s Purvis, angrier and more desperate in his hate and vengeance than the other bad guys. Akut Duz seems to be dubbed as comic relief Orland (his words don’t match his mouth movements), and Bruno Chambon offers a creepy moment or two as a cannibal the heroic duo encounter.

The film’s theatrical 1.85:1 aspect ratio has been faithfully delivered in a transfer that’s been enhanced anamorphically for widescreen televisions. At its best, sharpness is excellent with impressive detail for standard definition, and color is strong and appealing. But the film’s focus puller is quite inconsistent, and there are a number of scenes that are slightly out of focus. Black levels aren’t as deep as they need to be, and there are dust specks and small scratches here and there throughout the movie. The movie has been divided into chapters every ten minutes, so this film has 9 chapters.

The Dolby Digital 2.0 sound mix is decoded by Dolby Prologic into the center channel. The mono mix does a fine job with blending the dialogue, the synthesized background score by Mark Governor, and the atmospheric effects (which include some impressive explosions that have some power to them) into a single track without any one element overpowering the others. Age-related problems with hiss or crackle have been eliminated.

If cheesy apocalyptic movies are your thing, feel free to indulge in Land of Doom. With slack direction and a mostly mediocre production, there’s not a lot for your money here, but it might be good for a laugh or two, and at least the video and audio quality is not at fault. 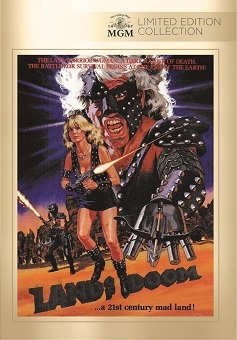