Forum List What's new Dark Style Change width
Log in Register
What's new Search
Menu
Log in
Register
Navigation
Install the app
More options
Dark Style
Close Menu
Posted on February 20, 2018 by Todd Erwin
You are using an out of date browser. It may not display this or other websites correctly.
You should upgrade or use an alternative browser.
Disney's classic dog love story 4 Stars

Disney’s all-time classic animal love story, Lady and the Tramp, returns to Blu-ray in a re-packaged Signature Collection edition that more or less recycles the video and audio transfer from the previous edition, adds a handful of new special features, carries over a handful of older special features, and places the majority of the remaining special features on Movies Anywhere and other streaming platforms.

At the turn of the 20th century, a cocker spaniel puppy named Lady (Barbara Luddy) is given by Jim Dear (Lee Millar) to his wife Darling (Peggy Lee) as a Christmas present. As she gets older, she meets the neighbor dogs, scottish terrier Jock (Bill Thompson) and bloodhound Trusty (Bill Baucom) and stray mutt Tramp (Larry Roberts). Shortly after a newborn baby arrives in the household, Lady’s owners go on a short vacation, leaving Aunt Sarah (Vewrna Felton) and her two Siamese cats (also voiced by Peggy Lee) to babysit. Aunt Sarah is not fond of dogs, ushering Lady out of the master bedroom and away from the infant, leaving her two mischievous cats to wreck havoc on the house and blame Lady for the mess. Thinking her cats are innocent, Aunt Sarah takes Lady to the pet store to have her fitted for a muzzle. Horrified, Lady escapes to the train yard, only to run into Tramp, who successfully talks a beaver at the zoo (voiced by the late, great Stan Freberg) to remove the muzzle from Lady. The two dogs wind up having a romantic spaghetti and meatballs dinner (the iconic image from the film) and fall in love, only to have Lady swooped up the next morning by the dog catcher, learning Tramp’s womanizing ways from the other dogs at the pound before being rescued and taken home by Aunt Sarah. Will these two dogs from (quite literally) opposite sides of the tracks find each other and live happily ever after?

I’ve always found myself more of a cat person than one who loves dogs. I don’t hate or dislike them, I just prefer cats. I’ve just been that way for as long as I can remember. That may be why I do not hold as much esteem as most do for Disney’s Lady and the Tramp. I’ve liked the movie, but have only watched it 3-4 times in my lifetime, at most. This was Disney’s (and the movie industry’s) first animated feature photographed in Cinemascope, and while it does take advantage of the extra-wide screen (2.55:1), it is not quite as intimate as the studio’s earlier efforts such as Pinocchio, Bambi, or Dumbo due to the lack of full, frame-filling close-ups. Walt Disney was also somewhat distracted during production, as he was splitting his time between this production and overseeing the construction of Disneyland nearly 40 miles away in Anaheim, California. It’s a simple story, sometimes too simple, I think, which results in what feels like a padded 76-minute running time. Lady and the Tramp never quite lives up to the legacy of those earlier films or some that came after (such as Sleeping Beauty which used the wider aspect ratio more effectively and The Jungle Book).

Disney’s new Signature Collection release of Lady and the Tramp recycles the same grain-scrubbed and often sterile video transfer used on the previous Diamond Edition from 2012. The studio’s transfers of its animated classics have been highly controversial, often giving the film a more digital look than what was seen theatrically before this entire digital revolution. This is a pristine and clean picture throughout with no visible scratches or dirt (camera negative or animation cel), but in doing so, it appears that the image has been softened somewhat, but it could also be my memory, as it has been decades since I saw the film theatrically or on laserdisc.

This release also recycles the same English audio tracks from the previous release, but that is actually a good thing. Viewers have a choice between a remixed 7.1 or a restored original 3.0 track, both in lossless DTS-HD Master Audio. Some Disney animated classics have contained a lossless remix but a lossy “restored original,” so high praise to the studio for using lossless on both. Both mixes do show their age at times due to the recording technology of the time, but they are free of hiss and crackles that plagues some films from this era. The 7.1 is more immersive, extending music cues and other background sounds to the rears and a stronger low-end, and both the 7.1 and 3.0 have a wide front stage. Dialogue is clear and understandable throughout.

Disney has provided a handful of new special features, carried over a few from prior editions, and (supposedly) archived most of the remaining features to accompany the digital copy of the film on Movies Anywhere and partner streaming services.

Sing-Along Mode: Selectable from the Play Movie menu, the movie is presented with the lyrics to many of the songs appearing as colorful subtitles at the bottom of the screen.

Inside Walt’s Story Meetings: An audio commentary of sorts, selectable from the Play Movie menu, is a recreation of story sessions and pitches in Walt’s office as the movie plays on screen.

Walt & His Dogs (1080p; 8:27): New to the Signature Collection release, archival audio of Walt Disney speaking about his dogs is played over images taken from the Walt Disney Family Museum.

Stories from Walt’s Office (1080p; 6:02): A look at the restoration of Walt Disney’s office on the Burbank lot, including a hidden kitchen. New to the Signature Collection release.

How to Make a Meatball and Other Fun Facts About “Lady and the Tramp” (1080p; 9:06): Oh My Disney Show host Alexys Gabrielle shares trivia about the film while teen chef Amber Kelly demonstrates how to cook up a pot of spaghetti and meatballs. New to the Signature Collection release.

Diane Disney Miller: Remembering Dad (1080p; 7:51): Walt’s daughter reminisces about her father’s apartment above the firehouse at Disneyland and the production of Lady and the Tramp.

Never Recorded Song – “I’m Free as the Breeze” (1080p; 1:26): Tramp originally had a song, in which he sang about his love for Lady that was cut very early on, accompanied by production sketches.

Classic Bonus Preview (1080p; 0:48): A brief summary of additional archival features that are accessible when you redeem the included digital copy on Movies Anywhere.

DVD Copy: The movie, and only the movie, in 480p with Dolby Digital 5.1 English, French and Spanish and the restored original English  in Dolby Digital 3.0.

Although not a big fan of this film, it is an enjoyable one. The video transfer may not be to everyone’s liking, but the audio is exceptional. Owners of the previous Diamond Collection edition may want to consider how much they want the three new special features included in this set.

Updated the Special Features section of my review.

Updated the Special Features again. Movies Anywhere has acknowledged that some codes were redeeming without special features in error, and suggested reaching out to them if anyone encounters this issue. Be prepared, however, to provide a copy of your redemption code certificate and possibly a store receipt.
You must log in or register to reply here. 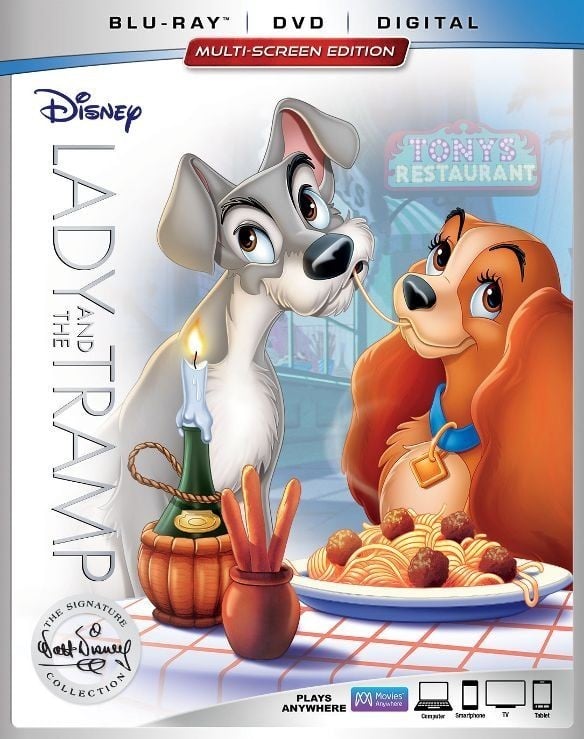