Forum List What's new Dark Style Change width
Log in Register
What's new Search
Menu
Log in
Register
Navigation
Install the app
More options
Dark Style
Close Menu
Posted on September 27, 2016 by Todd Erwin
You are using an out of date browser. It may not display this or other websites correctly.
You should upgrade or use an alternative browser.
Restored beyond its original brilliance 4.5 Stars

Sony celebrates the 30th Anniversary of Jim Henson’s Labyrinth with a beautifully restored 4K UHD edition that will certainly please fans of the film.

In Jim Henson’s Labyrinth, Sarah (Jennifer Connelly, in her film debut) is a teenage girl who escapes into fantasy books, often dressing the part and reciting the book’s text from memory. When her father and step-mother ask her to stay home and watch her baby brother, Toby, on yet another weekend evening, she begins reciting from her favorite book, The Labyrinth, and wishes for Jareth, the Goblin King (David Bowie), to take Toby away forever. When the wish comes true, Sarah finds herself in the story, and is greeted by Jareth, who challenges her to complete the Labyrinth in 13 hours before Toby is transformed into a goblin. Along the way, she befriends many interesting creatures designed by Brian Froud, including Hoggle (Brian Henson), a red-haired giant named Ludo, and a fox-like bridge guard, Sir Didymus.

Over the years, Labyrinth has become something of a cult classic. It’s storyline, basically the sexual awakening of a teenage girl, is not exactly the kind of material for a children’s film, and movie audiences largely ignored the film, grossing less than $13 million in the US. Looking at the film 30 years after its initial theatrical release, some of the visual effects do not hold up, with the Chilly Down musical number looking worse than ever in this new ultra high definition release. The interaction between the Muppets (for lack of a better term) and the actors is first rate, as you would expect from Jim Henson, and he keeps the film moving at a good pace. The screenplay by Monty Python alum Terry Jones has enough of his trademark British humor to keep the story from being too serious and injects an extra bit of fun to the film. The songs by David Bowie are a real treat, and it is his performance, obviously projecting the amount of fun he was having, that adds so much more charm to this film, especially after the world lost him earlier this year. Once again, however, the exit extension of Underground, which was only present on the New Line laserdisc release, has been shortened.

Per the enclosed liner notes by Brian Henson, the transfer used for this 30th anniversary edition was created by scanning the 35mm camera negative at 4K, with color correction and HDR applied under his supervision. The result is a major improvement over the original Blu-ray release from 2009, almost night and day. Colors are more vibrant and lifelike, increased detail (particularly in fabric textures and backgrounds such as the stone formations of the labyrinth itself), and improved contrast (look at the gradations in blacks on Jareth’s costume). Film grain has been left intact, resulting in what some may find a nuisance (similar to Ghostbusters), but this reviewer finds refreshing and very welcoming.

Labyrinth has had a spotty record in the audio department in just about all of its home video releases. The previous Blu-ray from 2009 was a major step forward with a Dolby TrueHD 5.1 mix that helped to resolve many of the frequency range issues that had plagued previous releases. For its 30th Anniversary, a new Dolby Atmos mix (with a Dolby TrueHD 7.1 core) has been created and is available on both the UHD and Blu-ray versions of the film. This new mix opens up the rear channels much more than before, providing a stronger surround presence, even when played back in a 5.1 configuration with additional front heights and ProLogic IIz enabled. Overhead effects are minimal, but the most noticeable one comes when Jareth tells Hoggle “I wouldn’t do that if I were you” as Hoggle is about to toss the tainted peach into the Bog of Eternal Stench. Dialogue remains clear and understandable throughout, directed mostly to the center channel, although panning is used as characters move around and off the screen. LFE is used to heighten the lower end, particularly when Ludo calls the rocks.

With one exception, all of the Special Features can be found on the Blu-ray version of the film.

Audio Commentary with Conceptual Designer Brian Froud: Accessible on both the UHD and Blu-ray versions, this is the same commentary track from the 2009 Blu-ray release. Froud discusses at length how the film came to be, what it’s like to work with Jim Henson, and what inspired him in his creations for the film.

Reordering Time: Looking Back at Labyrinth (1080p; 9:31): New interview segments with Jennifer Connelly, Brian Henson, Lisa Henson, Cheryl Henson, Vincent Anthony (founder and director of The Center for Puppetry Arts in Atlanta, GA), along with archival interview footage of Jim Henson are used to look back at the making of this original and now classic fantasy film. New for this release.

The Henson Legacy (1080p; 10:36):  New interview segments with Jennifer Connelly, Brian Henson, Lisa Henson, Cheryl Henson, Vincent Anthony (founder and director of The Center for Puppetry Arts in Atlanta, GA), along with archival interview footage of Jim Henson are used to look back at the life of Jim Henson, including family life, working on the set, and moving and restoring many of his company’s creations to The Center for Puppetry Arts. New for this release.

Remembering the Goblin King (1080p; 4:48): Jennifer Connelly, Brian Henson, and Cheryl Henson look back fondly on their experience working with David Bowie. New for this release.

“Inside the Labyrinth” Making of Documentary (480i; 56:28): A carryover from the original DVD release, this was a television special about the making of Labyrinth that aired around the time of the film’s theatrical release.

Journey Through the Labyrinth: “Kingdom of Characters” (480i; 27:57): Ported over from the 2009 Blu-ray release, Dave Goelz, Jane Gootnick, George Lucas, Brian Froud, Brian Henson, and Karen Prell discuss the creation of many of the characters in the film, with help from clips from the movie, behind the scenes footage, and test footage.

Journey Through the Labyrinth: “The Quest for the Goblin City“ (480i; 30:03): Concept Designer Brian Froud, Executive Producer George Lucas, Jim Henson’s assistant Mira Velimorivic, pupeteers Brian Henson, Dave Goelz, and Jane Gootnick, and choreographer Gates McFadden discuss the creative process behind getting the movie made in this featurette from the 2009 Blu-ray release.

The Storytellers – Picture in Picture (1080p): Ported over from the 2009 Blu-ray release, interviews and behind the scenes footage run in a smaller window in the corner of the screen throughout the running time of the feature film.

Digital HD Copy: An insert contains a code to redeem a digital copy through Ultraviolet. Those with 4K Sony TVs can get a 4K streaming version if redeemded through the URL on the insert.

It’s hard to believe that Labyrinth is celebrating its 30th anniversary. Fans should be thankful that Sony and The Jim Henson Company took some care into this celebratory reissue by creating a new 4K transfer and upgraded Dolby Atmos audio, plus some new retrospective special features (although I would have liked to see a new and more in-depth “making of” documentary with the surviving cast and crew). This is a very worthy upgrade.

FYI - Best Buy had the steelbook for $17.99 this week!!
You must log in or register to reply here. 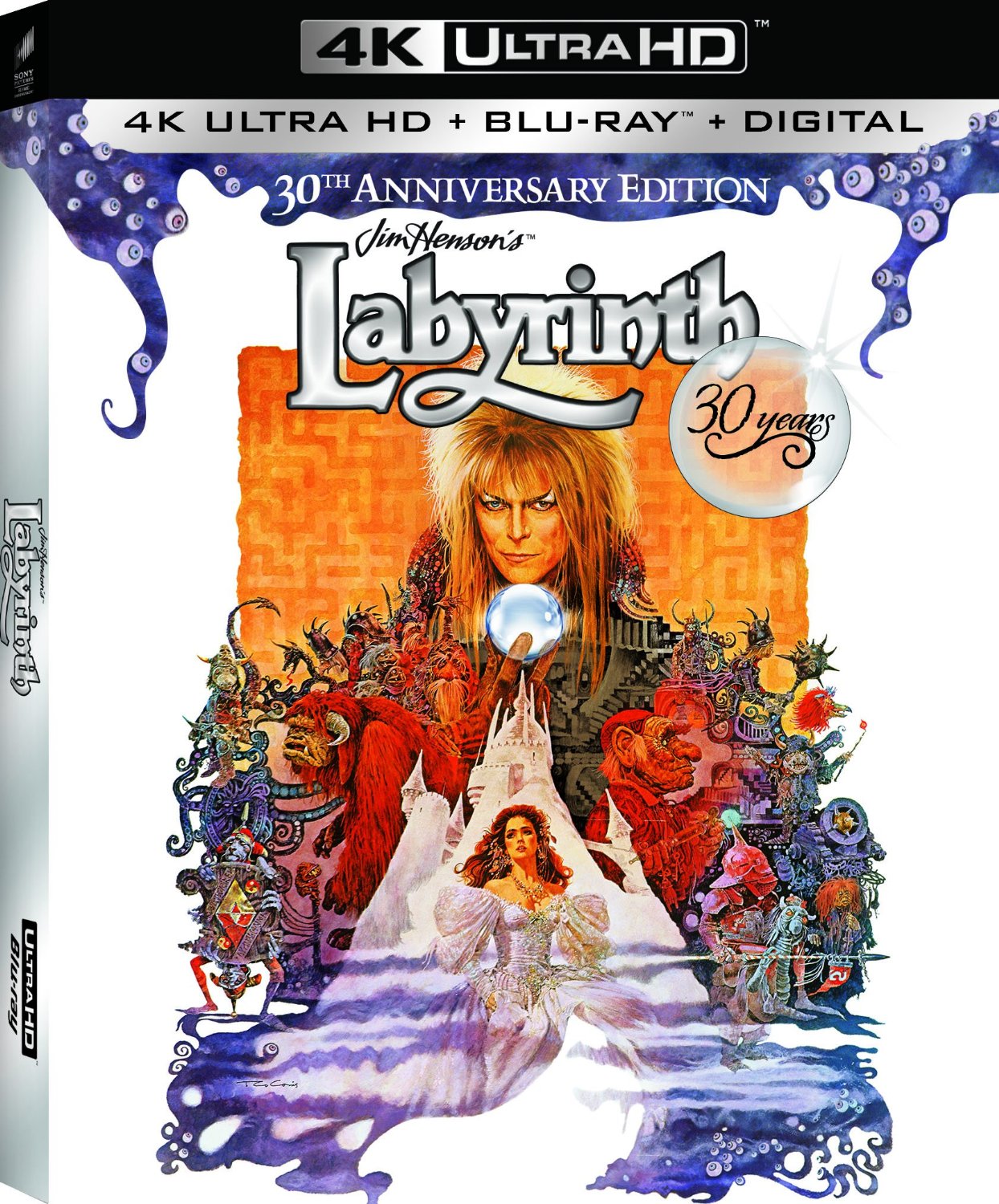