Jane Fonda fulfilled the promise of her developing dramatic prowess from They Shoot Horses, Don’t They? with a masterful performance in Alan J. Pakula’s Klute, a psychological thriller that may have a somewhat lumpy suspense plot but is quite powerful in its pointed examination of an insecure call girl being stalked by a killer.

Jane Fonda fulfilled the promise of her developing dramatic prowess from They Shoot Horses, Don’t They? with a masterful performance in Alan J. Pakula’s Klute, a psychological thriller that may have a somewhat lumpy suspense plot but is quite powerful in its pointed examination of an insecure call girl being stalked by a killer. The film’s central performance is the movie’s real claim to fame; its narrative, on the other hand, is a bit meandering, and its climax is not among the most inspired or satisfying in the annuls of film thrillers.

In investigating the disappearance of his friend Tom Gruneman (Robert Milli) in New York, private detective John Klute (Donald Sutherland) crosses paths with would be model and actress but current call girl Bree Daniels (Jane Fonda). Tom’s photograph doesn’t stir any memories within Miss Daniels, but it becomes clear during their interviews and a subsequent tentative romance which follows that Bree is being stalked by the person who is probably responsible for Tom’s disappearance. A series of other mysterious deaths puts Klute and Bree on their guard that their lives are in danger from an unstable figure who lurks on rooftops and in the shadows of their investigation.

The Oscar-nominated screenplay by Andy and Dave Lewis offers us a fascinating and penetrating look at the multi-faceted life of a once upscale call girl now reduced to turning $50 tricks as she scours New York for modeling and acting work. We see her manipulate her clients to parting with more money while feigning sexual passion while checking her watch, eavesdrop on her psychiatric sessions as she ponders her aimless life, and watch modeling interviews and acting auditions (in both of which she shows real potential even though she’s routinely rejected with hardly a glance) as she struggles to legitimize her New York existence. But the Lewises let the viewer down in terms of fashioning a truly suspenseful thriller to envelop this fascinating character while providing a complete cipher as their title character on whom much of the narrative revolves. They tip their hand far too early showing us the real culprit taking away any sense of mystery or surprise with his identity and don’t manage to plot a very stirring climax once the killer corners Bree and explains his reasons for murdering his previous victims. Director Alan J. Pakula, with just his second film as director, is still obviously learning his craft with the clumsily staged and shot final confrontation between killer and victim, but there is no denying there is a burgeoning talent here: the model and acting auditions are interestingly arranged, and Pakula has a novel way of blocking out portions of the Panavision widescreen so to better focus our attention on one single entity within the frame.

Jane Fonda offers an actress’ field day as Bree, clever and secure on the surface but uncertain, frightened, and often at sea in her private moments. It’s little wonder this won her the Oscar as well as citations from the New York Film Critics, the National Society of Film Critics, and the Golden Globes. It is among the best film performances she has ever given on the screen. Donald Sutherland is earnest but strangely one-note as John Klute, remaining mummy-like even after being seduced and discarded initially by Bree. Charles Cioffi as the missing Tom’s concerned boss Peter Cable is likewise unemotional through most of the proceedings, but Roy Scheider has some interesting moments as Bree’s former pimp Frank Ligourin. Dorothy Tristan’s heroin-addicted Arlyn Page holds some keys to the mystery’s solution though she and companion Barry Snider’s Burger are too strung out to offer much practical help. Vivian Nathan has one really good scene as Bree’s psychiatrist who berates her patient for expecting the impossible.

The film’s original Panavision aspect ratio of 2.39:1 is faithfully rendered in this 1080p transfer using the AVC codec. Warners and Criterion have done a masterful job cleaning and sprucing up the previously problematic master seen in the DVD release with the images now crisp, detailed, and artifact-free. Black levels might not be the darkest ever seen, but color rendering and contrast are excellent, and a film-like layer of grain gives the transfer a real 1970’s vibe. The movie has been divided into 17 chapters.

The PCM 1.0 sound mix is typical of its era and is very effective. Dialogue has been combined expertly with Michael Small’s eerily appropriate jangling score (which offers far more atmosphere than the script or direction most of the time), and the sound effects to produce a solid audio effort. Age-related problems like hiss, flutter, crackle, and hum simply aren’t present any more.

Alan Pakula Tribute (18:04, HD): Matthew Miele’s interview footage from a forthcoming documentary on the director features friends and family as well as audio and video footage of the man himself discussing Klute and also offers praise from director Steven Soderburgh and actor Charles Cioffi.

Jane Fonda Interview (36:05, HD): Illeana Douglas interviews Jane Fonda who discusses her preparations for the role and recalls some of the highlights of shooting the movie and of winning the Oscar for it.

The Look of Klute (25:16, HD): writer Amy Fine Collins discusses the clothes and hair of the era as they specifically relate to the film and analyzes the character of Bree as reflected by her hair and fashion choices.

The Dick Cavett Show (27:14, HD): a 1978 interview with the director as he mentions previous successes like Klute and All the President’s Men as a prelude to the then-imminent release of Comes a Horseman which reunited him with Jane Fonda.

Vintage Jane Fonda Interview (38:05, HD): Midge Mackenzie interviews the actress in 1973 about her film work and her dedication to social and political activism.

Twenty-Five page Booklet: contains cast and crew lists, information on the audio and video transfer, a think piece on the movie by film historian Mark Harris, and a lengthy 1972 interview with director Alan Pakula excerpted from Sight and Sound.

While not the greatest thriller of the 1970s, Alan J. Pakula’s Klute nevertheless presents one of the decade’s most enigmatic and intriguing main characters, and as acted by Jane Fonda, it remains one of the great cinematic character creations of the 20th century. Recommended! 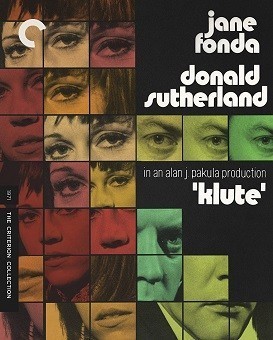