Forum List What's new Dark Style Change width
Log in Register
What's new Search
Menu
Log in
Register
Navigation
Install the app
More options
Dark Style
Close Menu
Posted on December 15, 2017 by Matt Hough
You are using an out of date browser. It may not display this or other websites correctly.
You should upgrade or use an alternative browser.
Enjoyable if overlong spy comic book adventure 3.5 Stars

Even the tastiest ice cream can become sickening when one overindulges, and that’s part of the problem with Matthew Vaughn’s Kingsman: The Golden Circle, the sequel to his own delightfully offbeat spy confection from 2015. At almost two-and-a-half hours, the movie seems overloaded to the gills; true, all remaining true to its carefully crafted spy origins established in the first film but with an added American flavor mixed into the sequel but nevertheless overpacked and sometimes a bit meandering in its storytelling. Fans of the first film will likely be mostly delighted with the continuation to the adventures from the first movie, but no one involved with this film seems ever to have considered the possibility that less might be more.

Secret agent Eggsy (Taron Egerton) is nicely adjusting to his continuing role in the Kingsman secret agent agency while also making headway in his engagement to Princess Tilde (Hanna Alström) of Sweden, but he’s shocked when international drug magnate Poppy (Julianne Moore) launches a surprise attack on all of the ten Kingman agents and offices at one time effectively wiping out the agency apart from Eggsy and tech guru Merlin (Mark Strong). Poppy has infected her worldwide drug supply with a virus which will kill hundreds of millions of users around the globe unless the President of the United States (Bruce Greenwood) agrees to legalize all drugs whereupon she will furnish the antidote. Eggsy and Merlin, with no one to turn to in England, travel to Kentucky to find their American counterparts at the Statesman, a bourbon distillery headed by the wily boss man Champagne (Jeff Bridges) with agents Tequila (Channing Tatum) and Whiskey ((Pedro Pascal) as senior field agents and the bookish Ginger Ale (Halle Berry) as Merlin’s American alter ego. While the President has no intention of capitulating to Poppy (in his mind, ridding the world of millions of drug users means he’s won the war on drugs), he pretends to be considering her offer while our heroes begin traveling the world trying to find the antidote which Poppy has cleverly hidden in key spots around the globe.

Reestablishing the comic book look and feel immediately in his first scene in the picture, a wild fight in a taxicab and a madcap chase around London which defy every possible law of physics, writer-director Matthew Vaughn wastes no time in grabbing viewers back into the world of the Kingsman. Like the first film, Vaughn and his co-writer Jane Goldman have no compunction about killing off both good guys and bad (though they feebly walk back Colin Firth’s death from the first film to allow him to play a key role in the sequel, especially in the last half of the movie), but those looking for similar beats to the original movie won’t be disappointed: there’s a fierce barroom fight, this time in a country-western bar rather than a London pub, and a number of exhilarating stunts involving a runaway ski lift and fierce tactical assaults in several locations but especially the climactic one in Poppy’s Cambodian compound styled on a 1950s small town motif that, true to the nature of the Kingsman films, is quirky and completely unique. Yes, once again, the major villain is an American (Samuel L. Jackson last time, Julianne Moore this time), and Poppy’s key henchman is a familiar face from the first film, failed Kingsman agent Charlie (Edward Holcroft) who’s now outfitted with a mechanical Swiss Army knife-like super-arm. But the agents’ travels to the Glastonbury Music Festival and that Italian chalet where the antidote might be found all protract the running time (and that’s not counting all of the scenes with the captured Elton John performing at will for the demanding Poppy), and the subplot of Charlie’s love affair with the Swedish princess likewise gets precious screen time, too (she’s one of the affected drug users), stretching the running time to an uncomfortable 141 minutes.

Taron Egerton has the confidence and sass to carry such a big film now, but he’s still abetted quite wonderfully by Mark Strong as Merlin whose contributions to the movie can’t be overstressed. American agents Channing Tatum and especially Pedro Pascal are also hugely enjoyable company (a late narrative tact throwing suspicion on Pascal’s Whiskey as a possible double agent seems to have been an ill-advised complexity) though Jeff Bridges and Halle Berry aren’t given nearly enough to do.  Julianne Moore with the sweet outer shell of June Cleaver and the nasty innards of a spitting viper is a delectable villain, and Edward Holcroft adds the viable physical threat to carry out her evil schemes. Colin Firth has a long road back to his old self from the first film, but he eventually gets there getting to play unbalanced and unsure in the early going.  Elton John has quite a lot to do as the outraged captive who gets to wear a succession of gaudy outfits typical of his younger self, and he’s quite funny.

The film’s 2.39:1 theatrical aspect ratio is faithfully delivered in this 2160p transfer using the HEVC codec. Sharpness is good, but it’s the brilliant color (especially in all of Julianne Moore’s scenes in her Cambodian retreat) abetted with excellent use of HDR that really makes this a stunning transfer. HDR also brings out highlights in lighting even in the night scenes that makes for a splendid visual experience. The movie has been divided into 28 chapters.

The Dolby Atmos sound design is striking from first moment to last (my equipment decoded the Dolby TrueHD 7.1 core). With the explosive music of Henry Jackman and Matthew Margeson, the continual atmospheric effects which soar above, around and through the soundstage, and the dialogue in the center channel all working together with stupendous harmony, this is one impressive sound mix.

There are no bonus features on the UHD disc. All of the following bonus material appears on the enclosed Blu-ray disc in the case:

Kingsman Archives: step-through galleries with concept art concerning the sets and costumes and a variety of stills.

Theatrical Trailers (3:53, HD): two red band trailers may be viewed together or separately.

Matthew Vaughn’s Kingsman: The Golden Circle offers an entertaining international expansion on the previous successful spy adventure film though it’s burdened with being overlong and occasionally crass (that R rating is duly earned). The UHD release offers superb picture and reference quality sound design to make for a most enjoyable viewing experience.

I think I read somewhere that Fox wanted to split this into 2 movies, but Vaughn objected. That may be why it feels so overstuffed and long.

Todd Erwin said:
I think I read somewhere that Fox wanted to split this into 2 movies, but Vaughn objected. That may be why it feels so overstuffed and long.
Click to expand...

That possibility is mentioned in the documentary, but they concluded there wasn't enough plot for two movies.

Thanks for the review Matt. It's too bad that this sequel is so top-heavy. The first film was a complete blast in practically every way.

Just finished watching this. I didn't think it was as good as the first, but it was still enjoyable.

Little too long, and not as good as part 1. PQ and AQ were good, final action sequence was real good.
You must log in or register to reply here.

A Few Words About A few words about...™ Kingsman: The Golden Circle -- in 4k UHD Blu-ray 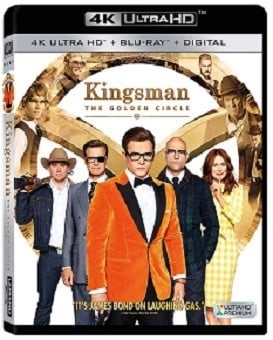