Forum List What's new Dark Style Change width
Log in Register
What's new Search
Menu
Log in
Register
Navigation
Install the app
More options
Dark Style
Close Menu
Posted on October 10, 2018 by Todd Erwin
You are using an out of date browser. It may not display this or other websites correctly.
You should upgrade or use an alternative browser.
Fascinating insight into a filmmaker 4.5 Stars

Larry Cohen may not be a household name, but has been working in the entertainment industry for nearly 60 years. Steve Mitchell’s documentary, King Cohen, takes a fascinating look at his career with help from fellow cast and crew members, as well as noted filmmakers such as Martin Scorsese, Joe Dante, and John Landis.

Larry Cohen got his start as a page at NBC in the late 1950s, eventually writing for live television for shows such as Kraft Theatre and The United States Steel Hour. As live dramas segued into filmed ones, Cohen adapted, creating shows like Branded with Chuck Connors and The Invaders starring Roy Thinnes. Disgruntled that his scripts were being altered in their vision, Cohen turned to directing, making his debut with Bone in 1972, a dark comedy starring Yaphet Kotto as a thief mistaken as an exterminator by a wealthy white couple. Although a difficult film to sell, it allowed Cohen to convince Samuel Z. Arkoff of American International Pictures to finance his next film, the black gangster film Black Ceasar starring Fred Williamson, which was a big hit for the indie distributor. Cohen would go on to direct 21 movies (including Q: The Winged Serpent, the It’s Alive trilogy, The Stuff, and retiring from directing with an episode of Masters of Horror), and write numerous movies and television shows (including Phone Booth, Best Seller, and an episode of NYPD Blue).

Larry Cohen is what many may refer to as a real character, and Steve Mitchell’s documentary is a loving tribute to the maverick filmmaker. Cohen is interviewed, telling some often wild tales about his career, often punctuated by interviews with those he’s worked with (Rick Baker, Michael Moriarty, Eric Roberts, Eric Bogosian, Fred Williamson), his fellow filmmakers (Joe Dante, John Landis, Martin Scorsese, Mick Garris), and even his current wife Cynthia Costas and ex-wife Janelle Webb. The film is a must-see for anyone who truly loves movies.

La La Land Entertainment brings King Cohen to Blu-ray in a limited edition run of only 5,000 copies. The feature is presented in the film’s theatrical aspect ratio of 1.78:1 in 1080p resolution and was encoded using the AVC codec. Most of the interview segments contain excellent detail with very good color fidelity and contrast, although some, such as the segments with Michael Moriarty, are a tad dark and contain some video noise. Film clips range from very good to mediocre, obviously taken from whatever source was available.

Although King Cohen is presented with a DTS-HD Master Audio 5.1 track, this is a very front heavy mix (it is a documentary loaded with interviews, after all), with score by Joe Kraemer filling out the surrounds. Dialogue is clear and understandable throughout.

Monsters on the Table (1080p; 3:25): Larry Cohen shows his collection of various creature and make-up effects from his films.

Hello, World! (1080p; 13:21): Larry Cohen’s personal introductions to King Cohen that he taped for film festivals that he was unable to attend.

King Cohen is a very entertaining look at a maverick filmmaker who broke the rules and made movies his way. The Blu-ray edition is limited to 5,000 copies and can be purchased from La La Land Records. Highly recommended.

La La Land Records is having a sale on this title when you order direct from them:

For those living in the Los Angeles Area:

The legend has left us.

https://www.hollywoodreporter.com/n...hell-up-harlem-writer-director-was-77-1185759
You must log in or register to reply here. 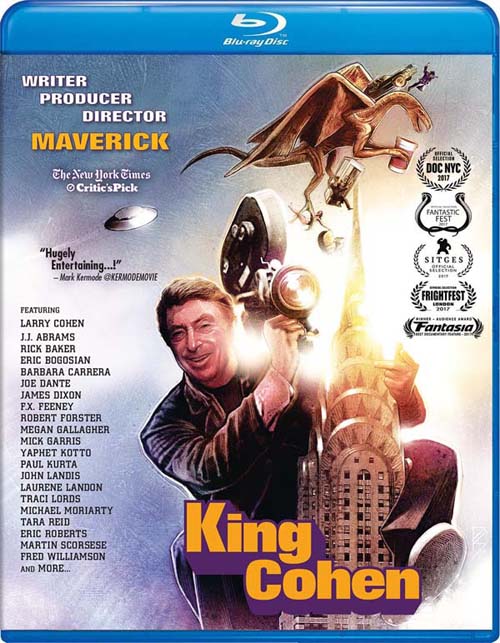