Forum List What's new Dark Style Change width
Log in Register
What's new Search
Menu
Log in
Register
Navigation
Install the app
More options
Dark Style
Close Menu
Posted on November 28, 2017 by Todd Erwin
You are using an out of date browser. It may not display this or other websites correctly.
You should upgrade or use an alternative browser. 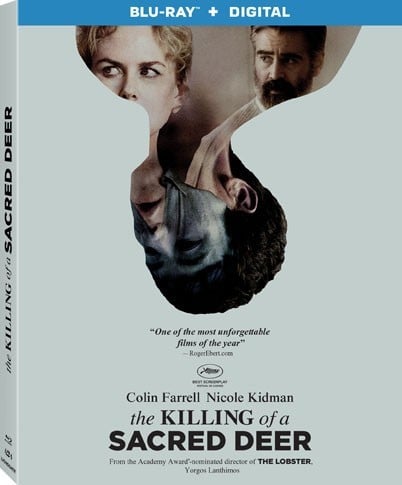 “One of the most unforgettable films of the year” — Brian Tallerico, Rogerebert.com

SANTA MONICA, CA (November 27, 2017) – Director Yorgos Lanthimos (The Lobster) reunites with Golden Globe® winner Colin Farrell (Best Actor in a Motion Picture – Musical or Comedy, In Bruges, 2009) in one of this year’s most frightening thrillers, The Killing of a Sacred Deer, arriving on Blu-ray™ (plus Digital) and DVD January 23 from Lionsgate. Co-starring Oscar® winner Nicole Kidman (Best Actress, The Hours, 2003), the 2017 Cannes Film Festival® Best Screenplay winner is an unforgettable thriller about the sacrifices one man has to make in order to protect his family.

Dr. Steven Murphy (Farrell) is a renowned cardiovascular surgeon presiding over a spotless household with his ophthalmologist wife, Anna (Kidman), and their two exemplary children, 12-year-old Bob (Sunny Suljic) and 14-year-old Kim (Raffey Cassidy). Lurking at the margins of Steven’s idyllic suburban existence is Martin (Barry Keoghan), a fatherless teen he has covertly taken under his wing. As Martin begins insinuating himself into the family’s life in ever-more unsettling displays, the full scope of his intent becomes menacingly clear when he confronts Steven with a long-forgotten transgression that will shatter the Murphy family’s domestic bliss.

Unforgettably enthralling and suspenseful, the Rotten Tomatoes Certified Fresh™ The

Rating: R for disturbing violent and sexual content, some graphic nudity and language.

The first major new studio in decades, Lionsgate is a global content platform whose films, television series, digital products and linear and over-the-top platforms reach next generation audiences around the world.  In addition to its filmed entertainment leadership, Lionsgate content drives a growing presence in interactive and location-based entertainment, gaming, virtual reality and other new entertainment technologies.  Lionsgate’s content initiatives are backed by a 16,000-title film and television library and delivered through a global licensing infrastructure.  The Lionsgate brand is synonymous with original, daring and ground-breaking content created with special emphasis on the evolving patterns and diverse composition of the Company’s worldwide consumer base.