Killing Hasselhoff trades on its celebrity cast but misuses them in an unfunny and tiresome comic farce that leaves no one’s show business reputation intact.

Some celebrities, no matter their talents or accomplishments, become jokes or punchlines in the business and often during their lifetimes. It happened to Zsa Zsa Gabor. In a later era, it happened to Steve Guttenberg (and wouldn’t you know that his fellow actor from Police Academy days turns up in this movie – Michael Winslow). And it has certainly become the case with David Hasselhoff, and it’s pretty much a situation he both encourages and embraces. Darren Grant’s Killing Hasselhoff uses not just the actor’s name but the actor himself to punch holes in his vacuous celebrity as the star of Knight Rider and Baywatch. The problem is that no matter how good a sport “The Hoff” is about this egotistical star persona he’s adopted especially for this film, the low quality and desperate nature of the comedy within this pitiful excuse for an entertainment are rather ugly, and Killing Hasselhoff doesn’t earn positive marks for any of its notable participants.

With his Hollywood nightclub Habitat failing and with debts amounting to $400,000 owed to mob bigshot Wasserstein (Will Sasso), Chris (Ken Jeong) can see only one way out: the celebrity death pool that he participates in is now up to a grand prize of $567,000, and Chris decides he will off his pick, David Hasselhoff (playing a show biz exaggeration of himself), and collect the prize. After a couple of Chris’ attempts at ending the Hoff via careful “accidents” which he escapes handily, Wasserstein hires a gay hitman Redix (Colton Dunn) to do the job so he can collect the grand prize for himself. After some time, he thinks maybe his own henchman Nick (Dan Bakkedahl) can kill the Hoff and save him some money, so now there are three people gunning for the Baywatch star who’s much more concerned with an even tan and retaining a glistening look than he is about staying safe from would-be assassins.

The Peter Hoare screenplay pulls out every four letter word imaginable to pad out the dialogue, and there is obviously much ad-libbing going on since some of the business’ most expert improvisers including Will Sasso, Rhys Darby (who plays Chris’ looney friend Paul Fishman), Jon Lovitz (as Hasselhoff’s agent who’s continually bothering him with mountains of script in which he’s just not interested) and Colton Dunn as well as star Ken Jeong have been cast in the movie. Hasselhoff continually drops the names of his two notable TV achievements Knight Rider and Baywatch (the Hoff is still riding around in a model of K.I.T.T. with voice provided by Justin Bieber and makes party conversation with old Baywatch co-star Gena Lee Nolin) and stays mostly shirtless for much of the film’s last half. Since the script is so meager, the movie is crammed with celebrity cameos (Rick Fox, Melody Brown, Pat Monahan, Justin Bieber in a finale cameo, and the aforementioned Michael Winslow and Gena Lee Nolin), and when all else fails, director Darren Grant simply parades some topless babes (Chelsea O’Toole looking stunning at poolside) or beefcake (Victor Turpin as a figment of twisted Fishman’s imagination in addition to the nearly always shirtless Hoff) before the camera.

You have to feel sorry for many of the performers here who have obvious talent but are weighed down by this insultingly unfunny script. Ken Jeong has to play a man desperate for money who somehow always seems to find funds to buy the things he needs to accomplish his murder plans (including $200 for a gun). There is also a very unfunny and unproductive subplot involving Chris’ school teacher girl friend Ann played by Jennifer Ikeda who, like all of the characters in the film, has no brains or common sense (Chris gets mixed up in a misunderstanding in his club with an under-aged starlet, but Ann won’t listen to his explanation or trust the man she supposedly loves and should know and so throws him out of the house). Will Sasso comes the closest to offering a real comedy performance as the mob loan shark, but his screen time has been limited. And the Hoff? He’s luxuriating in an outrageously gauche role that gives him more screen time than he’s enjoyed for quite some time and is even offered a song number while the credits roll (“Crushin’ It”), again not letting an opportunity pass to remind us that he’s celebrated in Germany as a great singer/entertainer. Outtakes are also offered during the closing credit crawl after the number concludes.

The film’s 1.85:1 theatrical aspect ratio is faithfully rendered in a transfer that’s been anamorphically enhanced for widescreen televisions. Sharpness is excellent for standard definition, and colors are bright and bold and the skin tones accurate. There are instances of aliasing and moiré patterns in tight line structures and patterned shirts and fabrics, but those artifacts come and go. The movie has been divided into 12 chapters.

The Dolby Digital 5.1 sound mix relies heavily on the front soundstage for most of its activity. Dialogue has been well recorded and has been placed in the center channel. The background music by Nathan Whitehead along with various rock and rap tunes for the nightclub scenes give the film its greatest amount of surround activity. Atmospheric effects apart from the club scenes are rather muted.

Deleted Scenes (8:27): six scenes have been collected in montage form.

Killing Hasselhoff trades on its celebrity cast but misuses them in an unfunny and tiresome comic farce that leaves no one’s show business reputation intact. 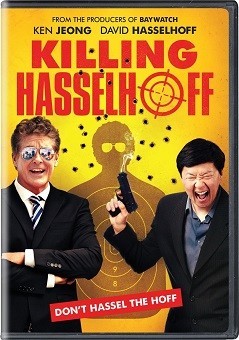