Forum List What's new Dark Style Change width
Log in Register
What's new Search
Menu
Log in
Register
Navigation
Install the app
More options
Dark Style
Close Menu
Posted on September 3, 2017 by Matt Hough
You are using an out of date browser. It may not display this or other websites correctly.
You should upgrade or use an alternative browser.
Middling Elvis Presley musical drama 3 Stars

While maybe not as completely entertaining as Jailhouse Rock or Viva Las Vegas, Kid Galahad places its star Elvis Presley a little out of his comfort zone and emerges as a middling entertainment.

1962 was the peak of Elvis Presley’s movie career. He had four movies in release during the year, all of them box-office hits, and ended up ranking fifth in the list of top box-office stars for the year, his highest-ever ranking in the list apart from his debut year when he ranked fourth. Kid Galahad, one of his four releases during the year, was somewhat less formulaic than Presley’s usual movie fare with its boxing milieu and a co-star (Gig Young) of almost equal star wattage to himself. Elvis still finds time to sing a passel of songs and romance a pretty girl, but there are darker themes present here than are usual in his fluff (even if they aren’t fully developed), and the movie certainly has a different vibe from his other outings that year: Blue Hawaii, Follow That Dream, and Girls! Girls! Girls!

Fresh out of the army, Walter Gulick (Elvis Presley) ambles into Grogan’s Gaelic Gardens, a training camp for professional boxers, looking for work as a mechanic. Owner Willy Grogan (Gig Young) isn’t all that anxious to keep him around, but when a promising young heavyweight contender (Michael Dante) needs a sparring partner, Walter volunteers and decks the far more experienced fighter with a huge right hand. Dubbed “Kid Galahad” by Willy’s longtime fiancée Dolly Fletcher (Lola Albright) due to his sweetness and courtesy, Walter quickly rises in the heavyweight ranks. But he has problems to overcome. Willy isn’t too keen on his twenty-one year old sister (Joan Blackman) falling for a man who wants to leave the fight game and become a mechanic, and naturally a local mob boss (David Lewis) wants to make sure that the Kid’s last fight with his young heavyweight sensation (Orlando De La Fuente) leaves no doubt about the eventual victor.

Though the movie shares the title with the 1937 Kid Galahad which starred Bette Davis and Edward G. Robinson (and Wayne Morris as the title character), it’s not technically a remake with William Fay’s screenplay focusing on the sport of boxing and the title character’s romance with his manager’s sister as the only real links between the two pictures. Although Elvis was experienced in karate and held a black belt in a couple of the martial arts, boxing was clearly not his forte, and he looks especially unconvincing in most of the sparring sessions and the couple of brief fight sequences in the movie. In the climactic bout, the fight choreography by Mushy Callahan is so poor that one might mistake what’s going on between the fighters for a tussle in an elementary schoolyard. The six songs included in the movie seem somehow out of place in this otherwise low-key drama (this wasn’t the first boxing musical nor was it the last one, but it’s clear that the sport and songs seem somewhat at odds). By themselves, though, the tunes aren’t bad: the other boxers gather around Elvis to join in the upbeat “This Is Living” after he scores his first knockout in the training camp, and “Home Is Where the Heart Is” is a lovely ballad which might have worked more effectively in another movie. “I Got Lucky” and “The King of the World Wide World” are more than passable upscale tunes, all better than the bland “A Whistlin’ Tune” which is the last of the show’s original songs. The writing can get pretty tiresome, too, with Gig Young, a hopeless man-child gambler who’s constantly in debt to everyone including the mob, lecturing Presley about his unworthiness to date his sister.

Elvis is in good voice in all of the numbers, but pitted in scenes with real pro actors like Gig Young and Charles Bronson, his delivery often seems a bit amateurish. Bronson as trainer/cut man Lew Nyack has the look of a man with pieces of his past carved into his face. Ironically, Bronson appeared as a very convincing fighter in several films and television programs both before and after this movie; no doubt this is why he later disparaged Presley’s inadequacies acting the role of a boxer. Lola Albright as Willy’s girl friend Dolly Fletcher has some fine dramatic scenes especially the showdown with Willy when it seems clear to her that even with three years of waiting without a proposal, marriage might not be in her future. Joan Blackman is adequate but no more as Elvis’ love interest in another of the King’s chaste film romances. David Lewis as crooked mobster Otto Danzig, Roy Roberts as an emotional fight promoter, Michael Dante as the good-natured first victim of Galahad’s fabled right hand, Robert Emhardt as the cantankerous camp cook, and Ned Glass as a town businessman all add life to the predictable tale. Look fast and you’ll see Ed Asner in his first movie role as an ADA investigating a mob hit connected indirectly to Willy.

The film is presented in its original screen aspect ratio of 1.85:1 and is offered in 1080p using the AVC codec. Sharpness is fine though some lengthy opticals not only look very soft but give the film a really dated appearance. Color is strong throughout and demonstrates no fading. But the transfer has had minimal cleaning done to it with a flurry of dust specks present almost from the beginning (admittedly, the first half is worse than the last half). The movie has been divided into 24 chapters.

The DTS-HD Master Audio 2.0 mono sound mix is typical for films of this era. The dialogue has been well-recorded and has been mixed carefully with the score by Jeff Alexander, songs by several hands, and ambient sounds of training sessions and fights so that no dialogue is lost. The track is also free of age-related artifacts like hiss and crackle and features better than average fidelity.

Six-Page Booklet: contains some color stills, original poster art on the back cover, and film historian Julie Kirgo’s good-natured appreciation of the movie.

While maybe not as completely entertaining as Jailhouse Rock or Viva Las Vegas, Kid Galahad places its star Elvis Presley a little out of his comfort zone and emerges as a middling entertainment. There are only 3,000 copies of this Blu-ray available. Those interested in purchasing it should go to either www.twilighttimemovies.com or www.screenarchives.com to see if product is still in stock. Information about the movie can also be found via Facebook at www.facebook.com/twilighttimemovies.

I certainly like this film more than you do. I think Elvis' acting is fine and enjoyable. I've seen 'em all (many times) and this is one of my favorites.
M

As recorded above, I found the first reel, if you like, dirty with loots of speckles and fine lines which I am sure with a little extra effort, and minimal cost, could have been eradicated. The audio was fine and I enjoyed the film for what it is.
You must log in or register to reply here. 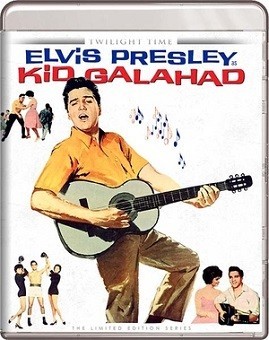